A Requiem, A Dream (Part One)

Hidden in the back of the San Francisco Mission neighborhood mainstay, Adobe Books, is “Sustained Decay,” a collaboration between Andy Vogt and Joshua Churchill. “Decay” revels in its cavernous setting, transforming the bookstore’s long-rotting back office into a glorious mausoleum. Vogt has been working with salvaged wood lath for years now, moving slowly from small to mural-sized trompe l’oeil assemblages. His 2007 piece, Barren Echelon, that was reinstalled this past March at Four Barrel Cafe, is a wonder of scale and meticulous craft that left me hoping that Vogt would continue to work big, both in size and ambition. “Decay” is a realization of my hopes and more. 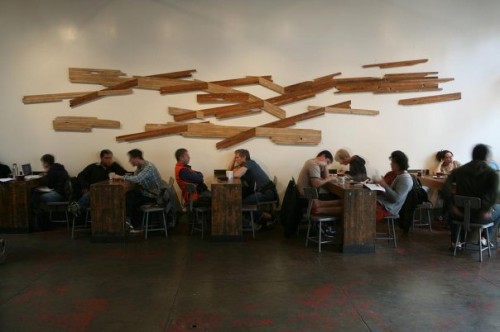 I visited the piece in the early evening, so the low light that peeked through the slats of one window added a dramatic luster to the must and chill, a final illumination of a dying room that would be reborn the next morning. Where past work by Vogt could be described as simply sculpture hanging on a gallery wall, “Decay” instead embeds itself much more organically into the space, and it’s often hard to discern where the existing construction ends and the artwork begins. Add the sinister drone of Joshua Churchill’s accompanying sound composition and suddenly one is hyperaware of the disintegration that has been occurring here over years, if not decades, in this secluded urban pocket. 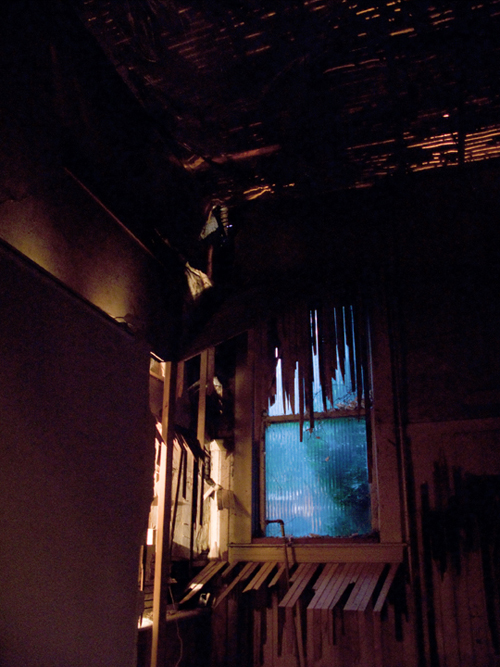 Since the economic boom of the late 1990s, the architectural landscape of San Francisco has changed dramatically. Never have so many high-priced residential buildings sprouted up to fill the foggy sky, and this current recession has only temporarily slowed the gutting renovations of many existing homes. Just the existence of Vogt’s work with recovered wood lath, a construction material of a bygone age, is a comment on a city in motion, a metropolis evolving into a new landscape that nurtures some while expelling others. “Sustained Decay” can be seen two ways: as a requiem for the back rooms of old bookstores that may soon disappear, and a dream that art will always counter—if quietly, secretly—the forces that work to smooth off the rough edges of the urban jungle.

“Sustained Decay” is on display at the Adobe Books Backroom Gallery, 3166 16th Street and continues through Sunday, August 16. Please check back soon for Part 2 of this article where I talk to Andy Vogt about his work.