I went down to the Artists Shop at Right Window on Friday evening and bought two pictures by San Francisco painter Scott Hewicker. He is one of my favorites and oh! So cheap! The artists’ shop is a project of the video artist Karla Milosevich and runs this weekend and next down at 992 Valencia Street. Lots and lots of artists, everything very reasonable, and 100 per cent of the $$$ goes to the artists themselves. 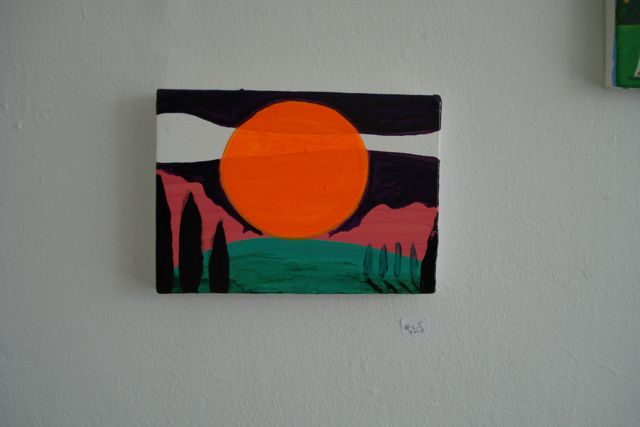 First I bought this little piece which I call, “Red Sun.”

Then I fought off several other would-be buyers to lay my hands on this great picture (below). Can you see it or can you not see it? It is like that old etching of Vanity looking into her mirror and canny viewers see a big skull, Or like that old optical illusion Wittgenstein wrote about where it looks like a duck and it looks like a rabbit.  Well, look again, and you will see two black cats aping the viewer’s gaze and staring, like yourself, into the severely luscious weather conditions only Hewicker knows how to give us.

Can you see them yet? One’s called Tex, the other Tom. They’re on either side of the picture, ears cocked as though food or danger were in the offing. 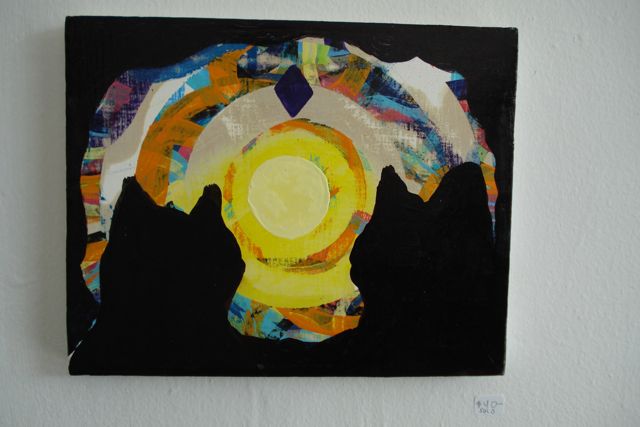 I already had some of Scott Hewicker’s pictures at home. One I’ve been staring at for years, literally years. In the picture, SWAN, two human figures spray secret visions like skunks marking territory. One’s a silhouette of a Spanish madonna like Our Lady of Guadalupe with a mantilla and long veil, tall and regal and utterly Kara Walker in her alterity and her malignity. From her eyes, or what might be her eyes if she wasn’t a domineering silhouette, a spectral pink triangle emerges and widens as it travels the spatial locale, searching for an object. The pink triangle of the Nazi queer era never looked so jolly. On the white background, like clouds in a calm summer sky, float a pair of matching concentric circles that look like a little boy went crazy with a compass and a pack of Flair pens in fruity colors–green, pink, yellow and blue. These circles look a little bit like eyes, the eyes of Mr. H. M. (Highly Magnified) Woggle-Bug from the Oz books, but perhaps in Hewicker’s setup they are meant to suggest some strange outside watcher from the invisible world. Strength is being sapped from Our Lady of Darkness by the unsparing pink rays of sight. 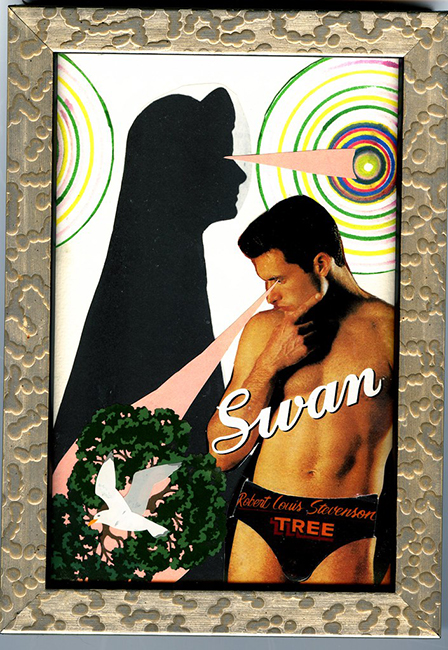 That’s just the background of this picture. In the foreground, leaning into the frame, a nude hunk like the young Alain Delon rests his chin on his fist and focuses a beam of pink light onto a green wreathy bush in which a white and gray dive flutters and flaps. Over his crotch a black bikini floats, emblazoned with the words, “Robert Louis Stevenson” and (bolder) “TREE.” Across his chest, like a white ribbon, the curled up word “SWAN.” When I bring it into the frame shop, the assistant asks if I’m a Jehovah’s Witness. Maybe there are trees and swans in Witness lore, and I just don’t know it.

In Mission bodegas and corner stores, tables wrap around the sidewalk selling all kinds of items, and three-to-a-pack SWAN underwear for men are piled high on every corner. If boxers have taken over in general for young men, there must be a lot of Spanish guys wearing these bikini briefs and low-rise hip-huggers. Scott would know, I should ask him. Anyway perhaps it’s the absurdity of the name “Swan,’ to use for these ghetto-bound products, that makes the picture more alive. One visitor to my apartment asked if I thought it a reference to Paul Swan, the vaudeville act slash modern dancer they called the “Most Beautiful Man in the World.” (Andy Warhol made a film of Swan’s act, when he was an elderly man close to death, in 1965–the only time in any of Warhol’s films he zoomed in on an actor.) I don’t know about the Paul Swan thing, I tell my visitor. I think it’s more the underwear, but yes I can imagine they named the underwear “Swan” in honor of Paul Swan.

Hewicker’s collage work express more of the appalling nature of the present, than do his paintings. (I wonder if this wasn’t true of Jess as well. Maybe there’s something inherent in collage that ties it to a dystopic universe, one in which the disparate is yoked together by violence like the old metaphysical poets.) 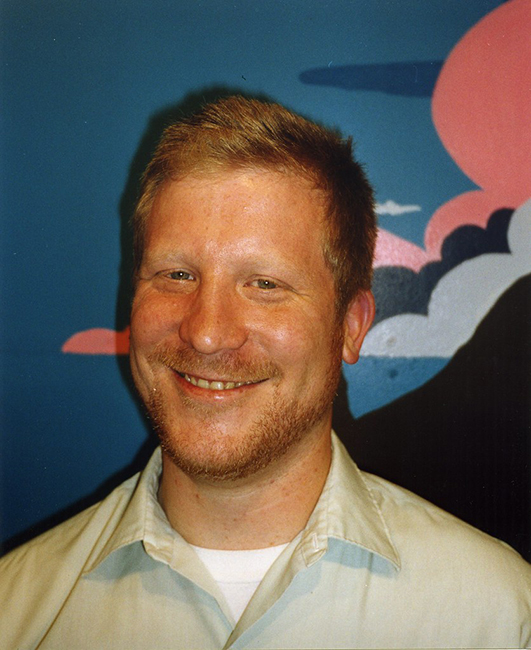 San Francisco artist Scott Hewicker, in front of a mural of his own design.

I could cite him as sui generis, an isolated instance of an artist without context, but he grows more interesting when placed in the social, political and aesthetic contexts of his time and the circles he occupies. Amid the grand and elegant mosaic of IN A DIFFERENT LIGHT, Larry Rinder’s and Nayland Blake’s 1995 gay theme park of a show at the Berkeley Art Museum, a special setting gave his jewel-like precision more radiance. In a Different Light was a show which insisted on commonalties of gay and lesbian experience that were then still under siege; while embracing the multiplicity of gay life and “gay art,” the curators still managed to find the rainbow in all of us. Scott was making little pathetic sculptures then, out of cheap materials, that would sit unobtrusively on the floor and invariably got stepped on, even by the guards. I don’t imagine he showed once without all his pieces being stomped on flat. It was part of an age when you’d go home from an opening, scrape your shoes on the welcome mat, and something by Scott Hewicker or Vince Fecteau would come off the sole of your shoe.

No wait, before the “Different Light” show Hewicker showed some drawings, I think, in the epochal SF “Prince” show curated by Glen Helfand at the alternative space New Langton Arts in the summer of 1993. Drawings on ruled notebook paper with three holes down the left side, as though torn from a loose-leaf binder by a middle school student and used to avert one’s ADD when the classroom attains that glassy dull vertigo feeling. What were they drawings of? I should have bought them. Heavy metal logos of 80s supergroups, boy fantasies. The “Just Pathetic” show of Ralph Rugoff, that marked the art of the 1990s as much as Jeffrey Vallance, John Miller, Raymond Pettibon, Mike Kelley, Jim Shaw, Erwin Wurm. And Hewicker fit right in there, kind of.

I could recognize his work from across the room, and sometimes I would ask myself how I knew it. Some of it is recognizing that particular palette, for at one time it was all about berry colors, colors so dark and strained that it seemed primitive people were banging them out on the rocks down by the fork in the stream. Deep colors with ethnic signification—the colors of Beowulf (the movie) or Lord of the Rings (Ralph Bakshi version). There was always room on the palette, on the other hand, for something completely un-dark and 60s pop dreamy, sky blue, Yardley pink, shades they sell cotton candy in at amusement fairs.