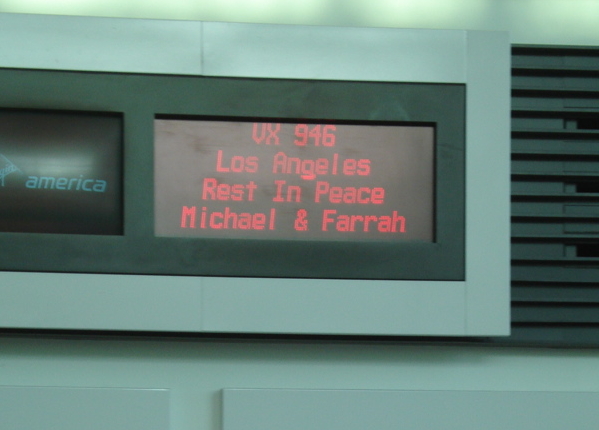 Last week a friend, the poet Joshua Clover, asked me to be a call in guest on his radio program at UC Davis and read Frank O’Hara’s poem “The Day Lady Died,” as it was exactly 50 years ago that Billie Holiday died and O’Hara wrote his famous surprise elegy for her. In his poem O’Hara links fandom to, well, death in a luminous and memorable way. When you listened to Billie Holiday “live” (a telling term), he recalls, “Everyone and I stopped breathing.” Naturally this made me think of how we all heard about Michael Jackson’s death, and I offered that somebody somewhere is writing “The Day Michael Jackson Died,” and Clover asked why didn’t I write such a poem. Maybe this is it. 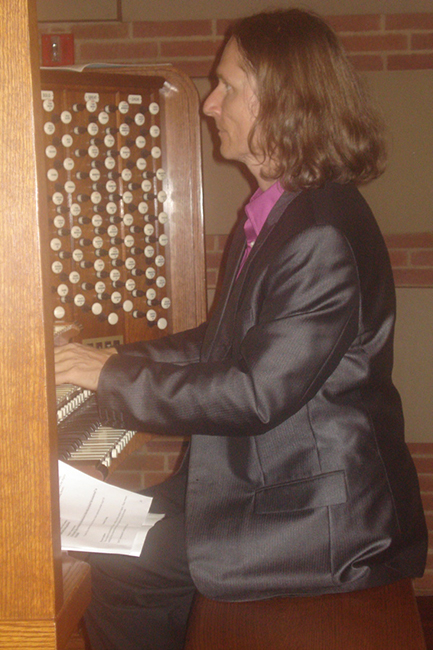 Christophe Bull, official organist at Royce Hall at UCLA, playing the Jupiter Symphony as the crowd left the auditorium

I flew out of SFO on the day Michael died (and Farrah Fawcett). I loved both of them probably for the same reason, they were both striking and glamorous stars who came to us cursed as though by jealous gods. At the Virgin America terminal, Virgin had transformed Gate 12 into a disco, the signage shook and glistened, while the stereo system boomed out “Scream,” “Beat It,” “Human Nature.” Next to the kiosk, the sign for Gate 12 announced Flight 945 for L.A. and beneath it read “Rest in Peace Michael and Farrah.” I actually didn’t want to get on the plane, it was more comforting to stay in that airport lounge and feel the community of people who Virgin thought would appreciate a greeting like “Rest in Peace Farrah and Michael.” That imaginary community Agamben predicted of people joined together by loss.

But once in Culver City I succumbed to the familiar lures of LA. I went to a lecture Dodie was giving at Antioch University, and to my left Sheree Rose was writing down Dodie’s remarks on a legal pad. 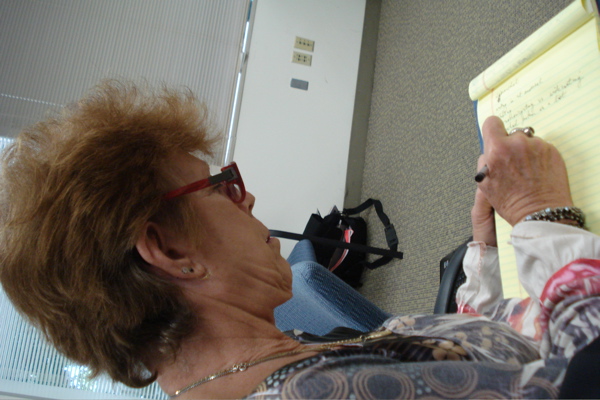 Sheree Rose, the artist and photographer, the widow of the writer Bob Flanagan, Sheree Rose whom I met when she was documenting the LA art scene of the “Helter Skelter” era, as well as its sexual underground. On the other side of the room sat the novelist Alistair McCartney whose novel The End of the World Book I’ve reviewed elsewhere.

Dodie and I went to a reading at the Poetics Research Bureau in Glendale, to hear K. Lorraine Graham, Amaranth Borsuk, and Hugh Behm-Steinberg. 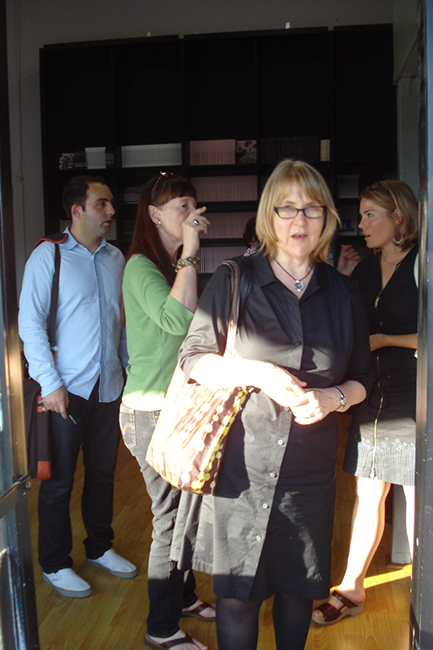 Dodie Bellamy in the doorway at the PRB. Behind her are Joseph Mosconi, that redheaded woman we met in Boulder but forget her name, she’s lovely, and on the right, K. Lorraine Graham.

I had never been to Glendale before that I can remember. We drove there in a rented car and I was struck by how little it must have changed from the city in which its greatest novelist, Charlotte Armstrong, wrote her incandescent thrillers in the 1940s, 1950s, and 1960s. I am trying to put together a collection of Armstrong’s uncollected stories and it is going to be a pip! The Poetics Research Bureau is a combination bookstore and performance space, everything in it chic, modern, black and conceptualized to within an inch of its life. It is owned and operated by Ara Shirinyan, Joseph Mosconi, and Andrew Maxwell, three of my favorite LA guys.

On the way back home we stopped at China Art Objects for the opening of Michael Rashkow’s exhibition, where we had arranged to meet the artist Erlea Maneros. Alas we did not realize that China Art Objects has a basement speakeasy space, so we wandered around Chinatown, looking in from time to time at Rashkow’s work and getting more and more disappointed on the one hand, and strangely exhilarated on the other. 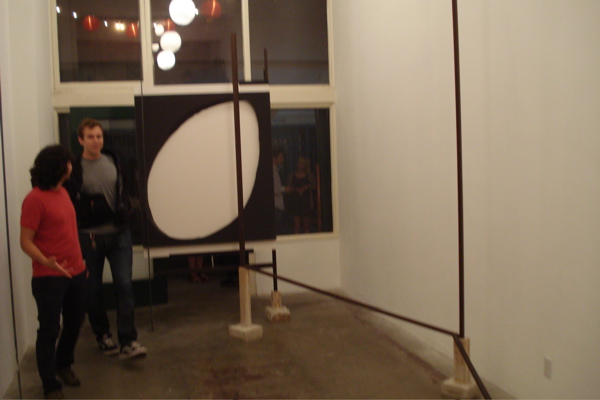 At the Muchael Rashkow opening. Those two guys will give you a sense of the work’s scale.

Los Angeles, of course, is a town that really loves sculpture almost as much as San Francisco loves its paintings of cake and classic cars. Rashkow’s work is just thrilling—a slimmed down and recession era version of an earlier generation of LA sculptors and installation artists. The sinewy steel poles reminded me of the delicate probes with which aliens are said to jiggle down the rectums of their abductees, and just as light and airy are his ways of dealing with the physical space of the bi-level gallery walls. Frustrating to photograph though! I had to keep putting people into the frame to show the scale or the angle. How did Julius Shulman do it all those years? Well, I guess he used models too sometimes. 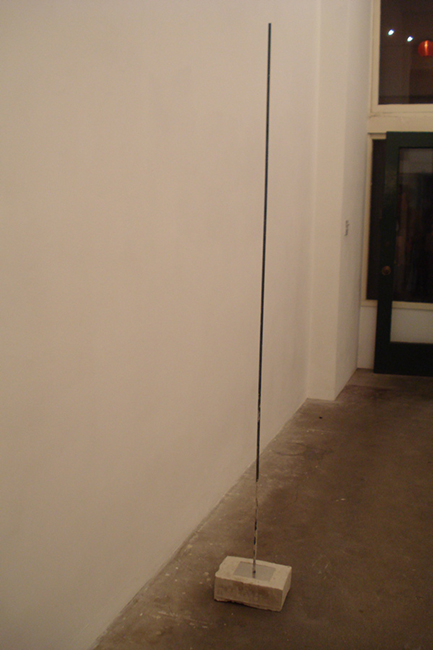 Dodie and I were staying in Topanga at the home of one of her former MFA students, a writer and teacher called Lamar Hawkins. That’s her name in private life, but the world knows her as the actress Lara Parker; when Dodie and i were kids we would run home from school to watch her every day, for she was the one of the ensemble of the 1960s cult sensation Dark Shadows. Thanks to DVD Dark Shadows is still popular, so I needn’t explain that it was a daily soap opera set in the Gothic world of Collinwood, Maine, and revolved around the vampire Barnabas Collins and his present-day descendants at Collins House, the spookiest mansion ever shown on TV. Lara Parker played Angelique, a witch intimately entangled with the life of Barnabas (she also acted in early films by John Avildsen and Brian De Palma, and shrieked her way through the drive-in classic Race with the Devil, opposite Peter Fonda). 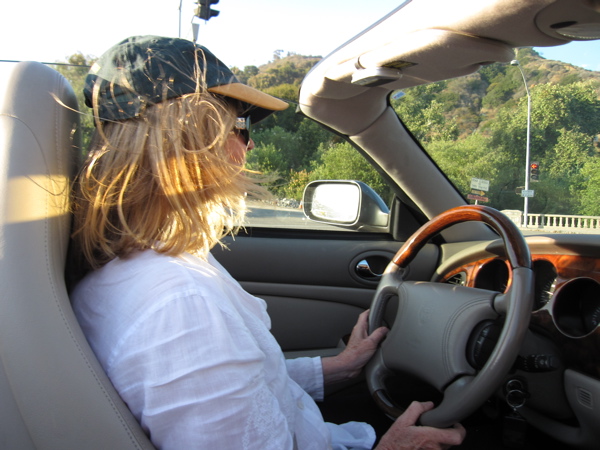 Tooling around Malibu with the legendary Lara Parker, feeling the wind blow through our hair, etc

In an episode of the TV series S.W.A.T she was a hostage tied to Farrah Fawcett-Majors for hours on end, and she told us how she “prepared” assiduously and delivered what she thought of as a good performance, and yet when the footage was played all you noticed was Farrah, looking scared and Farrah-esque despite having been virtually vacant during shooting. What are you going to do? 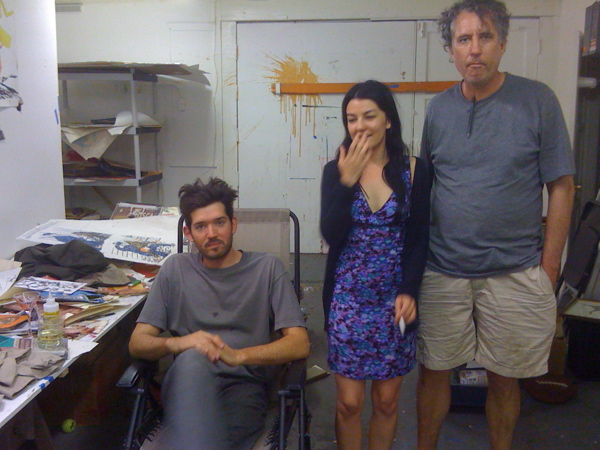 Our last day we visited with artist Raymond Pettibon at his Venice studio, where we found him working hard on some new projects. Everywhere you turn in that space there are dozens of drawings and paintings in various stages of completion, and I roamed around for hours turning up this and that and just being knocked out again and again by the  brilliance of the man. 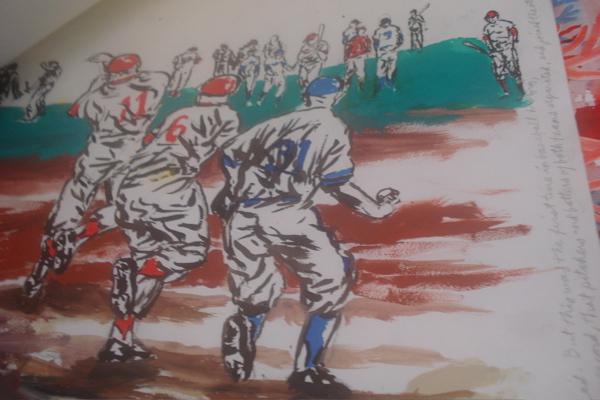 Hipnostasis, 2009—Pettibon’s video collaboration with Yoshua Okon—was playing at the Arory Center for the Arts, and another video project in which he co-stars with legendary 70s diva Karen Black was playing at the Hammer Museum while we were there. We got to meet the young New York based artist Aida Ruilova, who directed Pettibon and Black as part of her Hammer installation, and the Los Angeles sculptor Skyler Haskard. 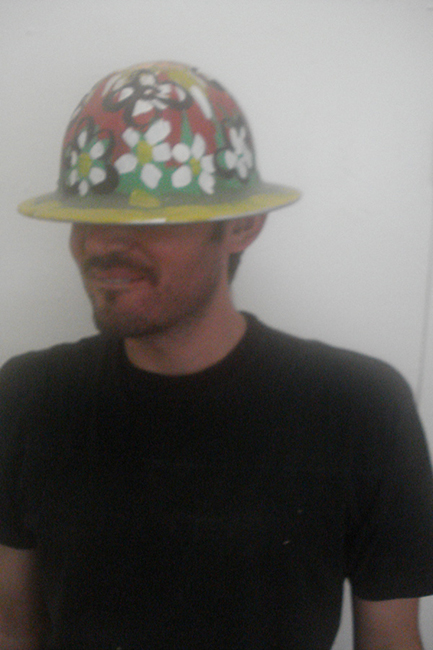 Watching Pettibon work, taking up drawing after drawing and adding just the right strokes, while continuing to take part in a far-ranging discussion of public events—and his recollections of Michael Jackson and Farrah Fawcett of course—is the sort of thing that leaves your jaw on the floor. And everyone and I stopped breathing. 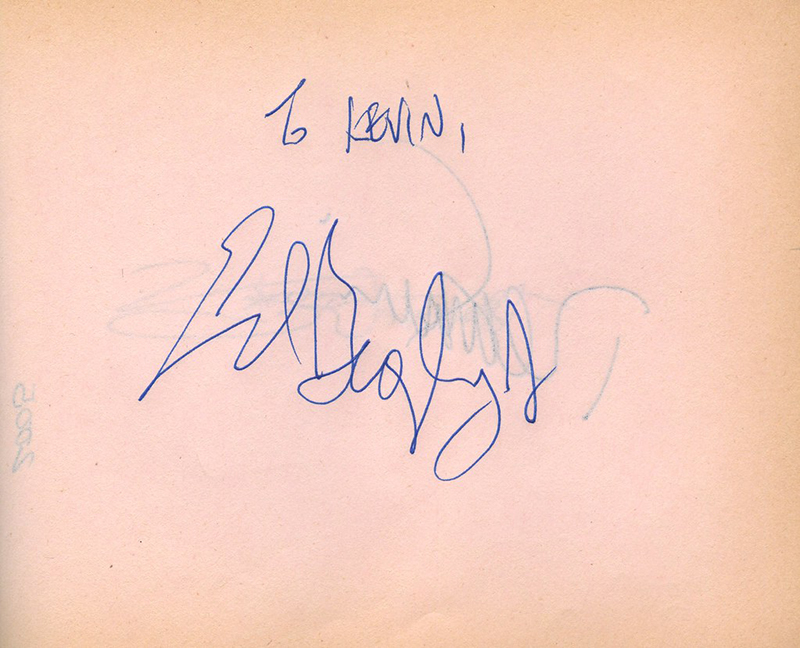 Fandom in action: we were standing around backstage at UCLA for the Antioch graduation, and Dodie spotted Ed Begley, Jr the actor and environmentalist. “I have my autograph book,” I fretted, “but he looks busy. Shall I wait and ask him later?” “No way,” Dodie replied. “There is no later!” So I summoned up my courage to approach him. “Will you sign my autograph book?” “Happily,” said Ed Begley Jr.