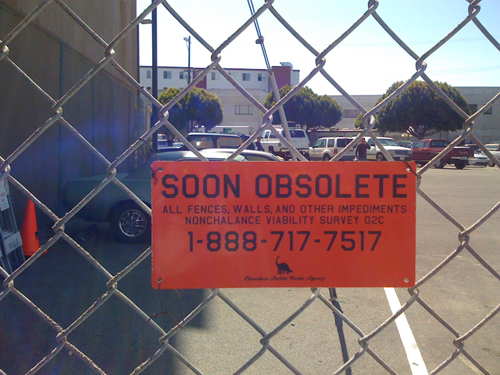 Adjacent to the live/work loft building where our studio occupies the main storefront space is a large fenced-in parking lot used by the PG&E employees that work in the area. Last week I stepped out to take a personal phone call and noticed that the barricade facing Harrison had been tagged every 50 feet with small, orange metal plates emblazoned with the copy “Soon Obsolete: All fences, walls, and other impediments. Nonchalance Viability Survey O2C” and a phone number, credited to the Elsewhere Public Works Agency.

After concluding my own call, I dialed the 888 number and an answering service picked up, giving me the business hours for EPWA (11:57PM–4:38AM, Thursday–Sunday, third Tuesdays, and all lunar eclipses) and offering me more information on Survey o2C if I pressed 1. After doing so, the voice on the other end informed me that by November 2009 all tagged fences, et al, would be, indeed, obsolete. A quick Google search brings up a EPWA web site that is equally opaque with its old school BBS format that requires one to type in commands to reveal more content in a radical manifesto vein. Further investigation reveals a list of programs that one can’t be sure are real or not, including an “International Shoe Recycling Program” and “End Times Preparedness Classes.”

I’m a big fan of art and design that inserts itself into the public realm, more so when it makes a socio-political comment (as in the work of Rigo or the Billboard Liberation Front), and the contained parking lots that blight our urban centers are worthy targets. Only come November will we know for sure if these spaces are “rendered obsolete,” as EPWA says, but I’d wager that our neighboring PG&E employees will still be parking behind chain link after the Thanksgiving holiday. Only one placard remains on the fence today, not even 2 weeks after going up. The initiative did catch my attention and the issue it addresses is timely, but there is this nagging question—especially after spending time amidst the Rural Studio and Project M in rural Alabama: Does it really go far enough?

My specific point here is that it’s time for activist design to go further than simple commentary. Not that commentary can’t provoke change or discourse, but in an age where anyone with a laptop, a wireless connection, and a Facebook account can procure the figurative equivalent of 100 people all wielding bullhorns at a protest rally, I wonder how many people are really listening. It’s all too easy to tune in solely to the transmissions that reinforce our individual belief systems and ignore the ones that don’t. The massive deluge of choice in contemporary society has, paradoxically, made many of us more narrowly focused in our media consumption. Opinions have never been so easy to project, but how many people are really acting on them? Proclaiming “Feed the Homeless” on a billboard means well, but it’s the feeding them that matters. In this age of infinite words, actual actions have never spoken more loudly. 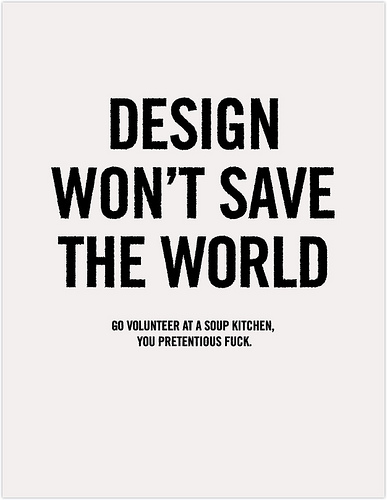 The EPWA initiative reminded me of a design thesis presentation I attended at CCA this past spring by Robyn Waxman, who created a community garden on Hooper Street, a dismal boulevard which splits the Potrero Hill campus. (My fellow columnist, Adrienne Skye Roberts, has already written extensively about this project.) Robyn remarked that in her efforts to gather interest from the CCA student community, she realized that the younger students (the so-called “millennial” generation) were less engaged by the commentary of her early, more traditionally activist pleas for change. Instead, it was when she actually gave them something to do, something that required their input and participation, did the garden movement really catch fire. Traditional communication design forms including posters were used, but it was Waxman’s persistence as a community organizer and facilitator that delivered on the visuals’ promise. Here, “design” went further than just creating artifacts that proclaim supposed truisms and delivered an entire system that catalyzed change on Hooper Street. If anything, the artifacts themselves were incidental and in Robyn’s critique I found it difficult to care about how they looked or even what they said, since the community garden was so compelling as an end result.

While I’d never discourage my students, employees or fellow designers from using their skills to promote the greater good or illuminate injustices, I’d challenge all of us to step out of the studio more often if we want to see our work actually have the hypothetical effect we often claim it does. I’m as big a fan of poster art as the next graphic designer, but if I read about one more initiative where esteemed design practitioners respond to a natural disaster or social cause by creating a poster that a few peers see online or in a small gallery, well, I may have to burn my Shepard Fairey Obama effigy in protest. It’s just too easy and too safe, no matter how effective the poster design may be. The AIGA commissioning 24 “Get Out the Vote” posters and getting them displayed at the presidential conventions might make the designers (which includes me, lest someone level a charge of hypocrisy) feel good about contributing to the cause, but it’s the other AIGA Design for Democracy programs, such as the ballot and election design initiative, that make the real difference. 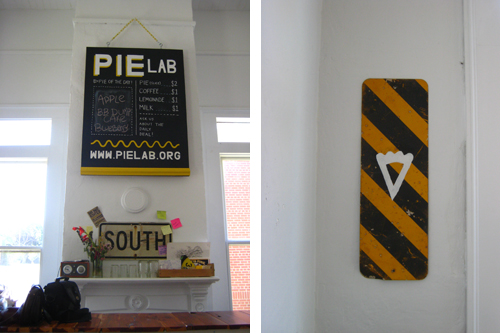 The Obama “Hope” image, coincidentally, is the defense most often mounted against my line of thought here, and I won’t deny Fairey’s creation provided a forceful visual to accompany an inspiring campaign. Nor would I dismiss the general conceit of using our form-making skills to address issues beyond those personal or commercial. But we overestimate the effect of these printed artifacts at the risk of accelerating our own obsolescence as change agents. I don’t care so much about the Project M-designed Pie Lab signage (though inventive and very nice). I care about the students’ idea for—and subsequent realization of—Pie Lab itself, which has brought varying factions of the often fractured Greensboro, Alabama community together to have lively discussions over pie and coffee. (Great article about it here.)  “Change” is not the designer in our office that stayed late to crank out another Get Out The Vote poster for the AIGA. “Change” is the designer who took off work to register voters in Nevada, and, ultimately, I’m more concerned with Obama getting elected than how his campaign posters looked.

Designers still need to make stuff. Make it beautiful, compelling, functional. And make it for worthy causes. Every so often, though, we should “go to Nevada,” so to speak. Let’s see action, instead of simply let’s see.