“I am always on the outside, trying to look inside…”

Two photography shows currently on view at SFMOMA provide an intriguing point of departure from which to consider the roles of insider and outsider. Robert Frank is an iconic example of the artist as outsider, looking in on society, as expressed by the quote above. His subjects are the everyday people whose lives comprise the American experience of the 1950s. Frank seeks out sites of exclusion in the culture he portrays. He looks most closely at poor people, white and black, whose circumstances give the lie to the promise of prosperity. A German Jew and Holocaust survivor, Frank understands America in the way only an immigrant, studiously engaged in a performance of belonging, can do. His influence is so widely felt that this work has come to represent ourselves to us – a record of our collective memories of a turbulent period. 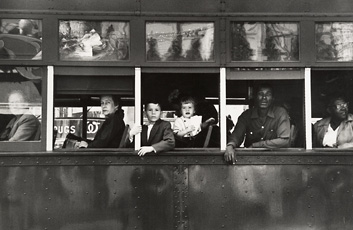 I’ll consider Frank in greater depth with a special guest later this week, but for now, let’s turn to Richard Avedon. At first glance, Avedon would seem to be photography’s consummate insider. Glamour shots of Suzy Parker and Marilyn Monroe are his calling-card. His subjects include the powerful – Henry Kissinger, George HW Bush – and the famous – Janis Joplin, Jimi Hendrix, Miles Davis. But Avedon’s camera has an equalizing power.

Turned on the 13-year-old rattlesnake skinner Boyd Fortin, Avedon’s lens elevates this young working man to a demi-god. Turned on the ever-fashionable Truman Capote, it highlights the vulnerability of a gay man living in a deeply homophobic era. Opera singer Marian Anderson is a diva who, despite her black complexion, is permitted to belong within a white, Eurocentric classical art world. The Duke and Duchess of Windsor have fallen from supreme monarchy, to become regular, old, unhappy rich people.

My favorite image in the show is the large mural portrait of Andy Warhol and his Factory cohort. Here, the interplay of insider and outsider reaches critical mass. Depicted in high-fashion style are characters who skirt the line between in and out: Warhol, a poor immigrant and commercial artist whose break-through into fine art acceptance was still only very recent; Brigid “Polk” Berlin, an heiress slumming it with wackos and speed freaks; “Little Joe” Dallesandro, a handsome all-American boy who became an embodiment of gay male desire; and Candy Darling, in a rare nude shot, whose combination of screen-siren visage and clearly masculine anatomy speaks volumes.

The photograph’s composition reflects this interplay as well. Warhol is nearly pushed out of the frame, and his attention is clearly elsewhere. Dallesandro and Paul Morrissey appear doubled, in one version for public consumption and another for those in the know. Brigid’s bare breast mirrors the naked rent boys in the adjacent frame. The whole group appears ambivalent, as though they know that the aggressive transgressions of the 1960s are beginning to wear thin.

Frank dedicated his life’s work to depicting the excluded. Avedon’s politics are somewhat more nuanced, as it is because of his insider status that he is able to show us where the boundaries dissolve. Though the insiders in his oeuvre draw the crowds to the museum, it’s the outsiders who stay with you long afterwards.