Blonde on a Bum Trip 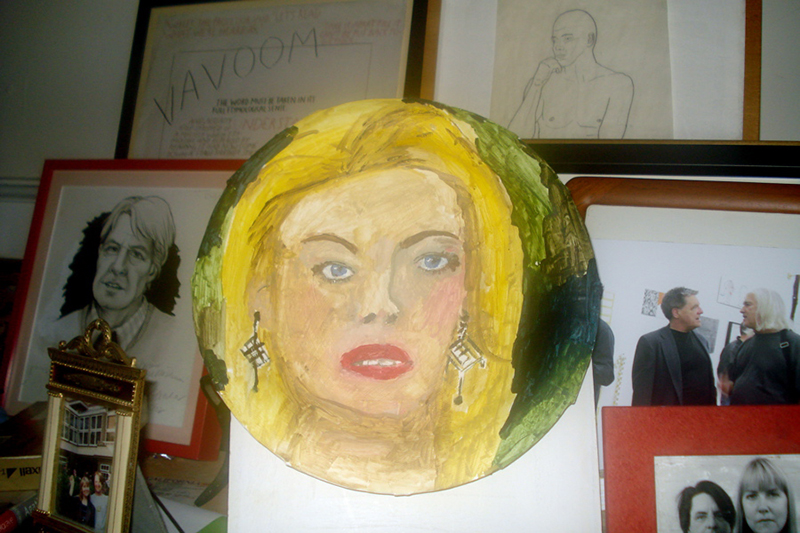 A crowded nook in my apartment, now dominated by “Blake” (2009), by one of my favorte painters Rachel Kaye.

Prompted by my colleague Traci Vogel and her admiring review in SF Weekly I took myself down to Triple Base Gallery, deep in the heart of the Mission, to check out the concurrent exhibitions by Hilary Pecis and Elyse Malouk, artists new to me, sort of, except when I saw these shows I realized each must have been operating for some time, just under my radar. Hilary Pecis takes up most of the front room at Triple Base, with her “Intricacies of Phantom Content,” sizable collage-based works of mind-blowing complexity. 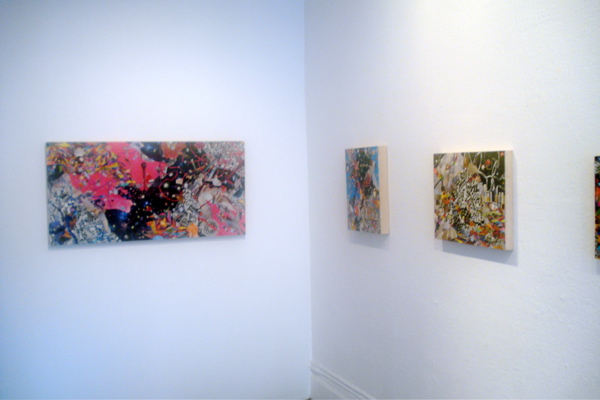 Traci Vogel and Matt Sussman have already written about these shows so well (Sussman in Flavorpill) that I hesitate to gild the lily. Vogel argues that Pecis partakes of two San Francisco traditions—assemblage and psychedelia—as a recipe for her strange brew, finding a certain “inevitability” in the results. 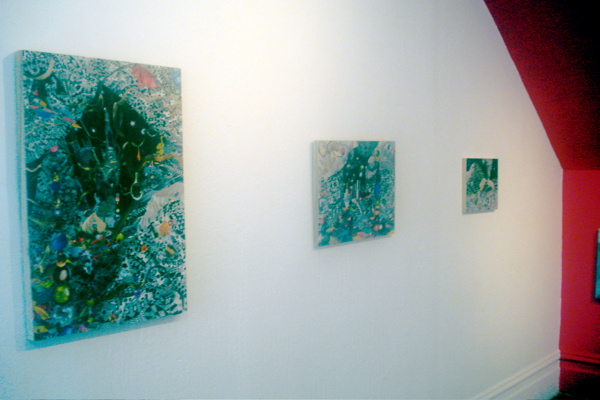 “Come with me,” urged gallerist Joyce Grimm as I hesitated above a trapdoor that led into the gallery’s basement. “It isn’t scary,” she lied, “and you won’t have to do anything, just come down this ladder a few steps, that’s all.” I made her demonstrate before I would agree, but then I walked down the steps myself without assistance. Really a child could do it. “What’s down here?” I wondered.

I’ve always liked being in people’s basements, ever since I saw Psycho as a child and Norman Bates’ mom is shown swirling around in that swivel chair with the naked light bulb careening crazily around her. When you’re in someone’s basement, you’re in their intimate secret spot. and you don’t have to Anna Freud to ask yourself why. Anyhow we climbed down the ladder into Elyse Malouk’s show, the very first basement installation Triple Base has ever had. You might easily think that this cellar was used for smuggling liquor during Prohibition, but Malouk has re-done it as a palace of northern lights. It must be a video setup that throws a pattern of delicate fairy lights across the room’s four walls, speeding up and growing distorted as they clear the corners, then snapping to a measured pattern until the next corner looms up. Additional mirroring surfaces are built into benches and low-slung surfaces near the floor, and I spent the next half hour feeling, well, I’ve finally hit fairyland. 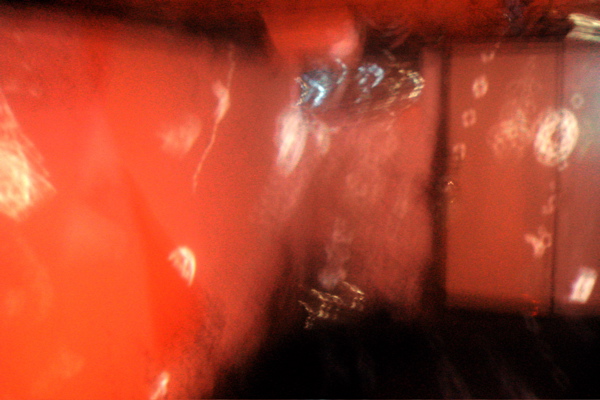 Tripping out in the basement of Triple Base

On terra firma once again I asked Joyce to fetch me the picture I had come for, Rachel Kaye’s 2009 “Blake” (Lively, star of TV’s Gossip Girl). The moment I saw this picture, painted on humble, yet sturdy Chinet, in Rachel Kaye’s spring show at Triple Base, I knew I had to have it. Kaye’s painting and drawing excites me in just about the same way that Hilary Knight’s illustrations to the Eloise books turned me on when I was a wee lad. Her studies of celebrity, privilege, display and glamour aim both high and low, but they deliver devastating messages that aren’t always pretty—and she’s so right on with her allusion bank. I thought I was the only one who remembered the shopworn angel they used to call Princess Lee Radziwill—and yet Rachel Kaye has allowed her to possess her much as that quiet, unnerving Helga once possessed Andrew Wyeth. You know I like bright glitzy surfaces, so this picture of Blake Lively is for me. She looks here like the archetypal “Blonde on a Bum Trip” that Warhol and Paul Morrissey envisioned for the film they wound up calling Women in Revolt (1971). If you know Gossip Girl, you know that Blake plays Serena van der Woodsen as though she were a conqueror, pitted against a brunette nemesis, aristocrat and frenemy, Blair Waldorf. Who’s trashier in real life, Blake or Leighton Meester, the young actress cast as Blair? Well, Leighton Meester was actually born in state prison, that gives her point right there. 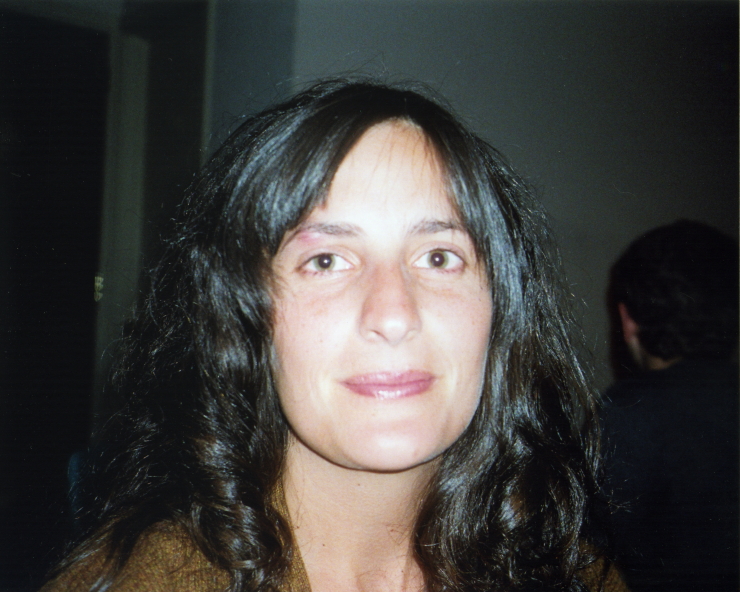 Rachel Kaye in happier days when she still lived in San Francisco, but God bless her in her current home in NYC