Art is a Gamble 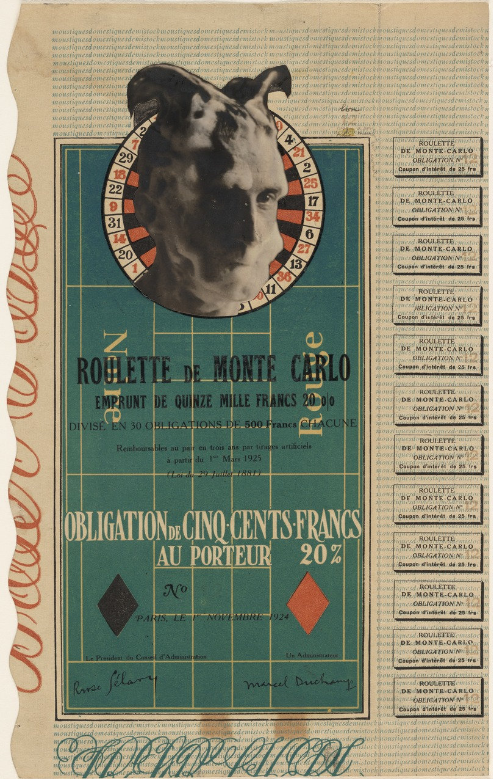 Last week, I went to see Inventing Marcel Duchamp: The Dynamics of Portraiture at the National Portrait Gallery in Washington, DC. In light of my ongoing ruminations on the economy’s effect on artists, one work especially stuck in my mind. In 1924, Duchamp proposed a project in which he invited investors to contribute to a fund, which he would use to play roulette in the casinos of Monte Carlo.

Monte Carlo Bond bears an image of the artist as the Roman god Mercury, photographed by Man Ray. His hair is whipped up with shaving lather to resemble the messenger god’s winged helmet. The print is designed to look like a roulette table. Along the right edge is a row of stamps, each denoting an investor in Duchamp’s gamble. The work is an overt comment on speculation in the art market, a phenomenon which benefited Duchamp both as speculator and as artist.

In the Bay Area, where the market for contemporary art is slow even at the best of times, artists have often turned to variants on Duchamp’s model. For example, Dan Nelson has recently initiated Make an Artist a Millionaire. Appropriating the philanthropic model of a non-profit organization, Nelson invites people to support him with donations of $1. He intends to solicit donations from 1 million individuals, which he will present as a bundle of cash as a work of sculpture. (Disclosure – I have donated to this project). Nelson’s art projects are frequently cumulative in nature, for example his artist book All Known Metal Bands which was a compendium of said bands alphabetized by title. Whereas earlier works were also research-based, this new project is entirely made by accumulation.Back in 2006, Oakland artists Sean Fletcher and Isabel Reichert lived their lives as artists and parents under the rubric of Death and Taxes, Inc. Inviting a group of artists, curators and critics to serve as Board of Directors, Fletcher and Reichert set up a corporation to govern their finances and their lifestyles. The idea sprung from the very real financial pressures the couple faced when raising a daughter on an artist’s budget. Inspired by conceptual art-life precedents such as the work of Tehching Hsieh, and unable to control their spending on their own, Fletcher and Reichert appropriated strategies from the corporate world. What they found was that the rigid structure exacerbated the pressure as much as alleviated it. They created a documentary on the project, and editions of quarterly earnings statements and Savarin coffee cans that they sold to raise funds for their family/corporation.

Additional examples abound. I’ll cover some more in future posts, and encourage commenters to describe their own art-as-life approaches.