Last month Joseph Del Pesco and I wrote about the new initiative by Artforum and e-flux (under their collaborative Art & Education site) which aims to serve as a database of scholarly essay on the history of art. Titled “Call for Art Historical Knowledge,” that post put forward speculations about the new archive, and mentioned that Joseph had sent to Art & Education a request for further clarifications about the editorial structure and economic model of the project.

In late June we received a response from Dawn Chan, an assistant editor at Artforum, who replied that the Papers archive is “an added service to the community,”  and “simply a venue whereby scholars can share their work.” It “yields no income.” She informed us that the goal of the project was to make worthwhile papers more easily available – which would supplement, rather than compete with, the venues where these articles might often appear. The few papers currently available seem to confirm this: they’re essays from gallery exhibitions whose catalogs are years old or relatively hard to access; translations, or studies which don’t seem to have been published before. The purview of the papers is wide, and the standards of writing are variable; the submissions are “given a cursory review by an editorial staff member, but are not edited. “All rights and permissions remain with the author. 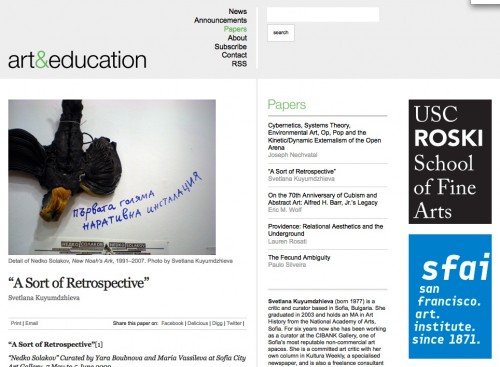 I wonder if there is a large backlog of papers yet unscreened; or if the takeup in the first few months has been as surprisingly low as it appears, considering the potential reach of the archive.

Her letter also confirms the “hybridity” of the project in the sense discussed in our earlier post: the blurring together of commercial and sharing economies. While this may be “simply a venue” for scholars, the banners that appear on the page represent (somewhat less simply) “added value to some of A&E’s clients and supporters.” We find an interesting twist here,  for “added value” is recognizable as a phrase used in service economies – much like a “free gift” or a “complimentary breakfast,” something abstracted from the real service provided (and, need I say, contingent upon the variable efforts and will of the provider). It can also be used to describe resources expended by management to encourage satisfaction and good will amongst producers of value.

It is breathtaking to see the exchange of art historical knowledge positioned so deftly as “added value” on the margins of publicity and advertisement. Should we historians nod cheerfully, now, thankful that someone somewhere has accorded us any sliver of space at all? Use it if you will. Take it if you must. A token of our mutual interest. A bright smile with your transaction.