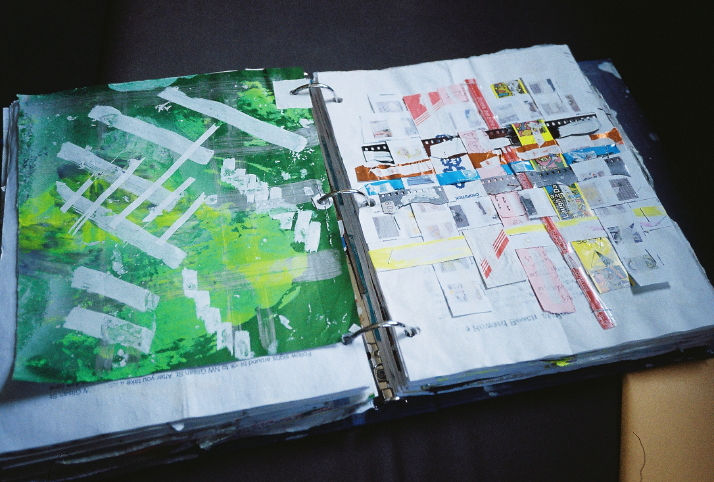 San Franciscans have but a few days to scurry down to Ratio 3 on Stevenson Street, there to check out “Liberation Upon Contact,” new work by gallery artists including Jose Alvarez, Sam Gordon, Jordan Kantor, Ruth Laskey, Barry McGee, Mitzi Pederson, Ara Peterson, and Jonathan Runcio. (Show closes May 30.) For those of you who have never been there, Ratio 3 and its director, debonair, saturnine Chris Perez, ”bring vastness to the mind.” That’s their slogan, and I always wince when I hear it first, then I think a little, forced to acquiesce.

A year ago I got a package in the mail with a few DVDs in it, each one an excerpt from Sam Gordon’s project “The Lost Kinetic World,” a 24 hour video montage of his wanderings through the art world. I scanned the accompanying press materials and was surprised to see myself listed among the hundreds of art figures appearing in the film. Dodie Bellamy too. She was on disk 4 and I was on disk 9 or something like that. Naturally we were curious to see what we were doing! The instinct was to fast forward through all the other chazzerai and find ourselves, and yet the rhythm and the fantastic juxtapositions of the material slowed us right down, and we wound up watching for hours. In New York last week I went to visit Sam Gordon in his studio and find out more about the man who had made us immortal with his roving eye. 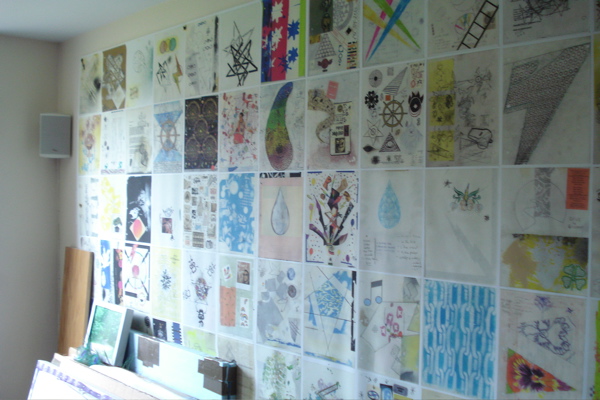 Once a year he Xeroxes the separate drawings then makes a wallpaper size print out of them (here hanging from west wall in his studio above desk).

Gordon’s East Village studio it turns out is right around the corner from St. Mark’s Place, and when I got there he had thoughtfully left out a copy of the catalogue Colter Jacobsen made for the KIKI: The PROOF IS IN THE PUDDING show that CJ and I had curated at Ratio 3 last summer. I assumed this meant that he wasn’t annoyed that we had taken his idea and run with it! For it was Gordon who had first proposed to Chris Perez to do such a retrospective, independently of my own vague plans for a similar project. I asked Sam to talk about Rick Jacobsen, the iconoclastic gallerist who had run Kiki (on 14th Street in the Mission, between Valencia and Guerrero) while fighting AIDS in the mid-1990s. “You must have been very young,” I queried. “I was right out of RISD and stumbling into Kiki I saw a new way of making art, or a new dynamic.” 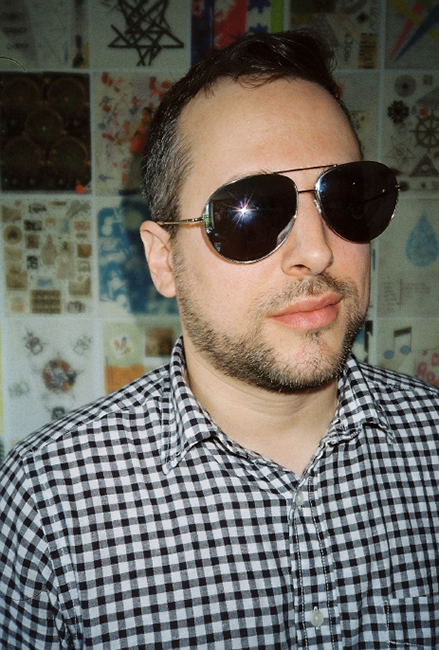 He moved through the apartment to show me scrapbooks of his own progress as an artist: big loose-leaf binders filled with sketches, paintings, drawings and scraps of his life , constantly changing, as time and circumstance altered his ideas. I loved the little drawings and the memorabilia of his life, layered into the work. “Sometimes literally,” he joked, lifting a baggie filled with material swept up from the work floor–a bag filled with glitter, wood shavings, dust, that would be applied to the surface of the paint, more DNA, traces of the daily.

Sam put a disk from “The Lost Kinetic World” into the projector, and trained it onto the brick wall opposite. The camera moves nimbly and gracefully through an exhibition of B. Wurtz’s sculptures—Wurtz, a New York artist with certain affinities to Gordon’s work—and called my attention to the music accompanying the sequence. “Recognize it?” “No,” I said absently. “It’s Arthur Russell!” he explained. Oops, but Arthur R has so many tracks I’d have to be Brainiac to recall them all. Sam Gordon’s sense of moving through life through the art works constellating through his life sticks with me, and I watch “The Lost Kinetic World” with the same fascination that one experiences watching the history films of Rossellini. 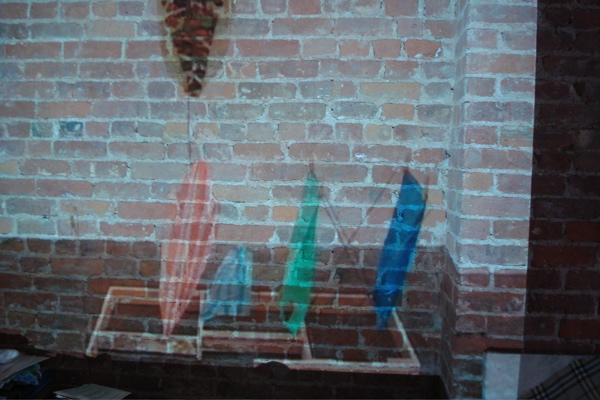 Can you make it out, this is the brick wall upon which we show a screen capture from “The Lost Kinetic World” Hardly optimal viewing surface, but strangely heimlich, home-made, contingent.

Time dissolves, knowledge articulates itself in movement—like the old time dissolve flowers I used to watch in school—except without dissolution, without regret.

Up on the wall Sam shows me images of a new series made up this time out of his own clothes. There’s one in which strips of denim are applied to the canvas in Rosicrucian patterns, another of raingear. Are these clothes you actually have worn? I ask. “Yes, but in a sense they’re representative of the clothes of the working artist.” Paint smears, turpentine, razor cuts mark the spot, as if to say, this is what I had on when I was alive, this is what covered my flesh as I moved through the world of light. 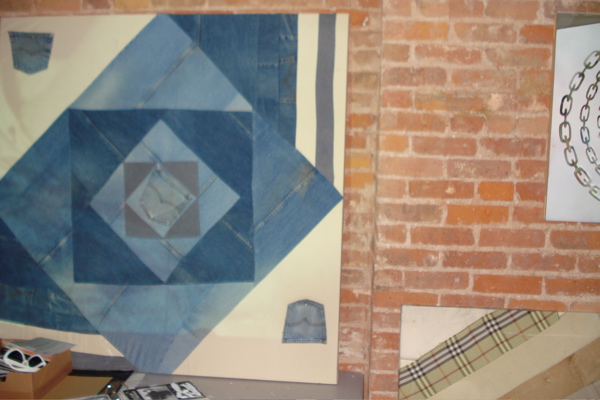