The documentary Empress Hotel, which screened at the recent San Francisco Film Festival, tells the story of the eponymous halfway house in San Francisco’s Tenderloin district that provides unique assistance to the city’s homeless, offering rooms and support services to help them transition back into normal society. The film, directed by Bay Area locals Allie Light and Irving Saraf, follows both the hotel’s residents and its tireless manager, Roberta Goodman (also a co-producer of the film), projecting stories of hope, ambivalence, and despair against a blighted urban backdrop all but unrecognizable to even the worldly San Franciscan. If the documentary alone wasn’t plenty poignant, Goodman and one of the hotel’s former residents (who has since transitioned to a semi-normal life) were at the festival screening with the directors to talk further about their experiences. It was enough to bring tears to one’s eyes. So would it be in bad taste for me to criticize the film for being so, well, ugly?

As a graphic designer, I admit that I’m more concerned with the way something looks than most people. I hold onto the romantic notion that aesthetic beauty, whatever one’s personal taste, has as much to contribute to the equation as function or intent. The gritty quality of the often badly-lit and hand-held camerawork in Hotel suited its subject matter though it rarely felt intentionally so. I’m sure the production was completed on a shoestring budget so I can somewhat forgive the lack of feature film sheen, but what really made me wince was the stock footage often used to further illustrate some of the residents’ stories. “I had problems with alcohol” translates to a kitschy clip of a glass under a flowing beer tap. Do we really need to see this? Don’t the lines on this poor man’s sandpaper face say enough? It’s the equivalent of using a bad stock photo in a brochure design. 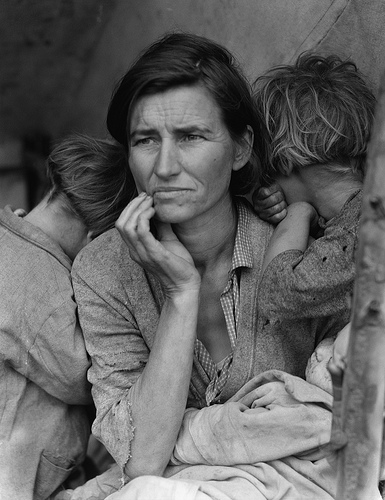 An argument for the filmmakers’ tact is that to aestheticize these people and the hotel would be irresponsible—a fetishistic exercise that distracts from their plight. One could level this criticism, I suppose, at an image as archetypical (and, these days, timely) as Dorothea Lange’s photograph Destitute peapickers in California; a 32 year old mother of seven children, February 1936 (also know as the “Migrant Mother” photo). I would argue, though, that the crafted beauty of this photo is what helped it become an iconic symbol and do exactly what the Lange intended—to call attention to the struggles of everyday people whose lives were devastated by the Great Depression. 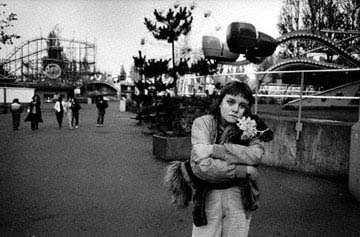 I thought about Lange’s photo in relation to Hotel after attending SFIFF’s annual “State of the Cinema” address delivered by the photographer Mary Ellen Mark. Mark quickly ran through a presentation of  Seen Behind the Scene: Forty Years of Photographing on Set, a survey of her film location photography, and then, after some goading from the audience, showed selections from her Twins series as well. Mark initially didn’t want to show the Twins photos because they had been taken with a 20 x 24 film camera and their projection onscreen in the theater didn’t capture the nuances of the original prints. She said repeatedly during her presentation, “All my photos are sharp. Do they look sharp?” Here was one of the premiere American documentary photographers emphasizing—gasp—that craft was a critical factor in her work.

I was introduced to Mark’s work through her photos of Seattle street kids collected in the now seminal monograph, Streetwise. I discovered the Streetwise photographs via the 1984 film documentary of the same name (directed by Mark’s husband Martin Bell) that evolved out of the original photo series. After watching a few sections of Streetwise online, I’m struck how the stark, sublime essence of Mark’s photos is retained in Bell’s film. The opening shot alone is a stunner—a street kid, barely in his teens, looks straight at the camera while, through voiceover, he talks about loving to fly. The film then cuts to the boy perched on a bridge and as his soliloquy concludes—”The only bad thing about flying is having to come back down to the f–king world.”—he jumps, the camera following his descent in slow motion to the water below. The film medium demands a different strategy than Mark’s photos, but the anguished poetry is still there.

Streetwise, photo series and documentary film, have endured as much due to their finely-honed aesthetic visions as their social ones. The digital age has put cameras in the hands of everyone and I’d be silly to argue that it’s a bad thing. But what’s striking about viewing these 25 year-old works today is how the care and craft stand out even more amidst the deluge of amateur photography and video that was inevitable with this democratization of technology. Pointing one’s camera at subject matter that has poetic potential doesn’t ensure one will end up with poetry, no matter how well-intentioned the motivation. Some years ago, a designer colleague of mine was asked to judge a prestigious design competition. He remarked to me that he wouldn’t be “letting in any of that do-gooder, non-profit work that looks like crap. It needs to be judged on the all the merits like anything else.” This may sound like grumpy-designer talk, but his point is vaild—the intent alone is not what makes the work worthy.

The act of documenting is a necessary one, often illuminating and preserving what previously was hidden or lost. Empress Hotel surely does this. I just wish I was left with an indelible image that turned this documentary into art I’ll never forget. Godard famously remarked, “The cinema is truth at 24 frames per second.” What good is the truth if we don’t really remember it afterwards?