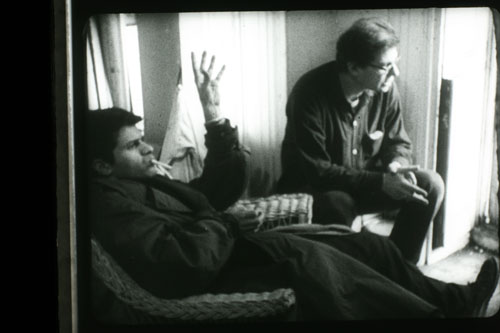 The first program of the extensive Robert Frank retrospective has arrived—prepare yourself for a turbulent voyage. The Americans evinced an underlying interest in narrative, and before it had been released in book form, Frank had made the leap into filmmaking, in the process helping to launch the spectacular era of “Underground Movies”. This movement, rising from the intensely passionate world of New York cinephilia in what might be termed its “alternative” forms, would swell to become one of the dominant fixtures of the New York scene for more than a decade, before long making its influence felt around the world. Made at a time when it still seemed possible to propose a self-sustaining “counter-cinema” to the established genre forms of Hollywood features, Frank’s beginning forays were short, but were nonetheless major salvos towards the creation of a renewed cinematic culture.

Pull My Daisy, written and narrated by Jack Kerouac (whose voice-over commentary includes all the cast’s dialogue), and featuring Allen Ginsburg, Gregory Corso, Peter Orlovsky, Alice Neel, Larry Rivers, and Delphine Seyrig, among others, is easily the most famous and celebrated of Beat films. Based on an incident from Kerouac’s relationship with Neal and Carolyn Cassady, Frank and co-director Alfred Leslie create the illusion of spontaneity and improvisation in their depiction of the clash between the free and easy Beats and those encumbered by petit-bourgeois convention. While form and content seem fused, Daisy followed its script, and was rehearsed and photographed via conventional means. The results, unveiled in a double-premiere withJohn Cassavetes’ Shadows in November 1959, were hailed by Jonas Mekas in the Village Voice as the “most alive and the most truthful of films”.

The Sin of Jesus, based on a story by Isaac Babel, is the tale of a pregnant farm wife whose man abandons her for the army. With no other apparent desire, aside from her child, but companionship, she is rendered disconsolate. Taking pity on this simple soul, Jesus informs her he will lend her one of his angels to keep her company, but with whom she mustn’t reproduce. After a “wedding party” celebrated with her new companion’s brethren, she is left alone with a creature more beautiful than any she’s ever encountered, and in the darkened house the warnings of Jesus are forgotten… Through low-budget, but flamboyantly expressive cinematic means, Sin brilliantly evokes a private dreamscape, made the more convincing by contrast with its indigent setting. Featuring the first film performance by “Telli” Savalas, this film confronts the duplicity at the heart of Judeo-Christianity when its newly-emboldened protagonist turns the tables on Jesus and His laws, demanding to know “Who”, after all, “made me this way?!”

OK End Here amalgamates the stylistics of Antonioni and cinéma vérité to portray a day in the life of a New York couple on the verge of middle-age. It’s clear the time of carefree dreaming is over. As they lie in bed one morning, the woman asks: “Deus ex machina… what does that mean?” “It means”, the man says, “it’s time to get up”. Through fluidly floating movement by a seemingly “independent camera”, and fragmented editing, Frank conveys in a nonpareil manner the disassociation and disconnect experienced by the woman, and through her, by the man. By turns heavy and whimsical, OK is graced by several superlative performances, Martin La Salle as the man not least among them. For those familiar with La Salle only through his immortalizing, but deliberately uninflected appearance as star of Robert Bresson’s Pickpocket, the sensitivity and lightness of his performance in OK will come as a frisson-laden shock. A gorgeously crafted work, OK End Here is a major entry in the cycle of films dealing with female ennui and alienation which would play out over the next decade, whose highlights include Godard’s Vivre sa vie, Antonioni’s Red Desert, and Cassavetes’ A Woman Under the Influence.

The strength of these three works augurs well for this retrospective. Though Frank’s interest in narrative payoff is tenuous, as with The Americans it was immediately clear to those of vision that his films were imbued with an emigre’s acute sense of a country in an on-going and tormented process of evolution. Keep alert to the developments of this series—those familiar with Frank’s work solely via his still photography only know part of this wide terrain.