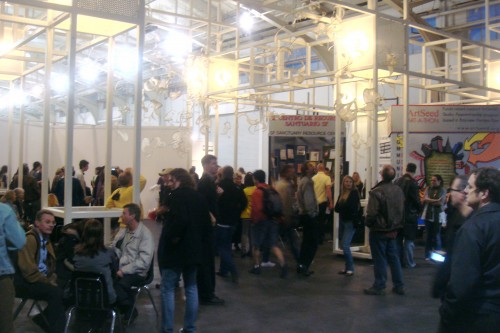 The end of the spring term at art schools is marked by multiple convocations – symposia, commencements, barbecues, brunches, kaffeeklatsches – none more charged and peculiar than the graduate exhibition. A vast amount of effort, skilled thought, time and energy is expended on these events, by students, faculty and event organizers. And yet the exhibitions are as a rule ambiguous: grand, chaotic marketplaces where uneven intentions, practices and audiences converge upon one another.

My photographs, I should say, are from a specific event, San Francisco Art Institute’s 2009 Vernissage, but my remarks below aim to put forward some ideas about the general form, and not the one occasion.

What is a graduate exhibition anyways? Who is it for, and what status achieved by the artworks it includes? Its origin would seem to run very deep into the history of art education, to the moment when art study became the province of academies, rather than craft or guild apprenticeships. As a modernist I am out of my depth historically on this subject – most of what I know comes from one fantastic book – but it seems grad exhibitions reach back at least to the origins of the Salon, which began when the professors of the Académie royale de peinture et de sculpture in Paris hauled out the paintings of recent graduates of the Êcole for a semi-public comparison at the Salon Carré in 1673. Such salons would become a vital staging-ground for public judgment in the 18th century – the very idea of a public sphere emerges from such situations – as well as an important counter-force to the museums and noble collections. 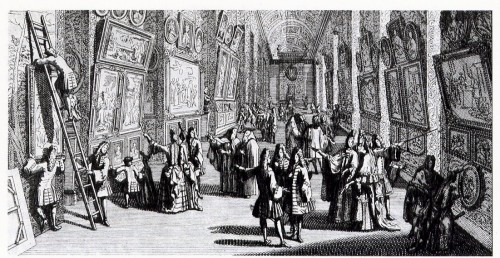 Compare the contemporary grad show to an image of those Salons (this one A. Hadamart’s engraving of the Salon of 1699), though, and a number of differences immediately appear. Rather than a dense and cacophonous visual field, the contemporary grad exhibitions often hive their students into corners, zones or stalls, not unlike those of art fairs. This organization removes comparison from the visual field, and therefore obviates meaningful relationships among works by different artists. Artists too have increasingly insisted on determining the conditions of their exhibition, arranging works into constellations that aim to defy or compensate for their status as mere objects. An effect of this is that each artist is individuated, such that exhibition is foiled a frame for judgment; “Each artwork is defined by its intention to… stand alone.”

So too is critique assumed largely to happen anterior to exhibition, amongst the adepts in the studios. Public debate, such as it occurs, is baffled by the spaces of exhibition, funneled down hallways and scattered amongst cubicles. Charles Baudelaire cut his teeth in his twenties writing about the Salons critically. In contrast these modern Salon-like events are largely ceremonial culminations, secular bar mitzvahs. To criticize the grad shows, to write about them at all, would be to misrecognize this fact – which is not to say that such a misrecognition might not be worthwhile. 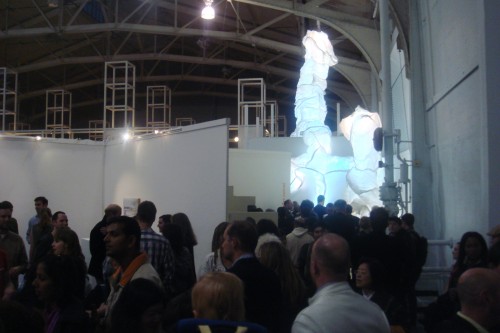 On the other hand, a curious visitor will discover that curators and gallerists do sometimes use grad shows to prowl for new artists. The demands of pedagogy dovetail too harmoniously at times with the logic of the market. Which is not to say that many succeed in getting shows or gallery representation from the event – but to say that this is the deceptive promise of the grad exhibition’s fair-like form.

Art schools are meant to be incubators of novel forms and styles of art-practice: “The future of culture,” as CCA’s slogan goes. Grad shows, however, often put forward alongside their “future” a broad range of styles and subjects deemed obsolete by magazines, museums and the market. Which institutions, need it be said, don’t necessarily or solely determine what art can do or mean. It would be too hopeful to suggest here, as Samuel Delany has argued of science fiction, that devalued margins may be places where more freedom can be found. But I don’t mind the idea of the school as partly a reservation for déclassé styles and forms of knowledge; they might be grounds from which difference can be pictured and the limits of the contemporary can be perceived.