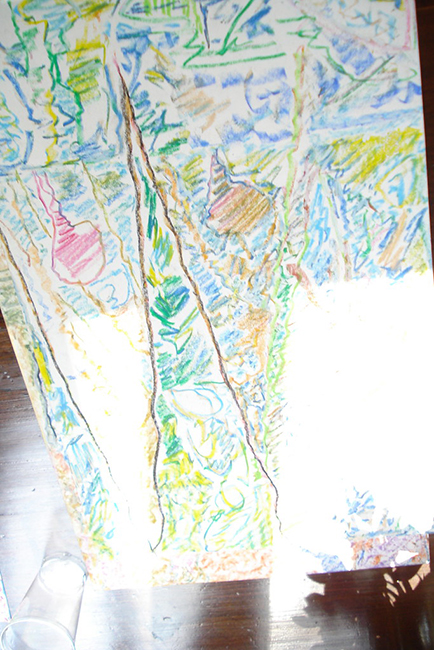 I’ve never met the painter Harry Jacobus but his position in San Francisco art history is unassailable, and his romantic vision has this sort of, oh I don’t know, sublime excess that speaks to me even today.  Maybe you have to be in the right mood to get him, and perhaps that’s why his reputation is highest among poets, musicians, and other artists.   That’s just a guess on my part.  The work is decorative, pleasing, and stops just this side of florid, but all these things are true of Cezanne, right, and yet Harry Jacobus is a name unknown except for, hmmm, I am tempted to use the term cognoscenti even though that seems dead wrong!  But I do love him.

Some find his work unbearably twee, even trite.  If you find the early, romantic pictures of Jess too sincere, you are definitely not man enough to stare down the limpid realities of Jacobus at his most characteristic. (With Jess and the poet Robert Duncan, Harry Jacobus founded the legendary King Ubu Gallery on Fillmore Street back in 1953.) Thus it was with great interest that I opened my mailbox to find an invitation to a show of Jacobus’s crayon drawings—some paintings—that was going to be held at a private home in Berkeley right behind the Claremont Hotel.

I went with Eric Delehoy, a friend of my wife’s who was visiting from Portland, a man whom I hoped would appreciate the rarity of the occasion. Eric, a writer himself and one of the editors of Gertrude magazine, just gulped and got into the car, and from there we got lost three different times.  So when we tiptoed in, the event had begun and our hostess was playing some French music on the piano and it was like a Raul Ruiz film come to life. Either she had taken all her other art work down, and just hung every wall with Jacobus work of all periods, or she actually has this on her walls every day.

A drawing by Robert Duncan sat on the spinet—or whatever it’s called. Outside of that it was 100 per cent Harry Jacobus. 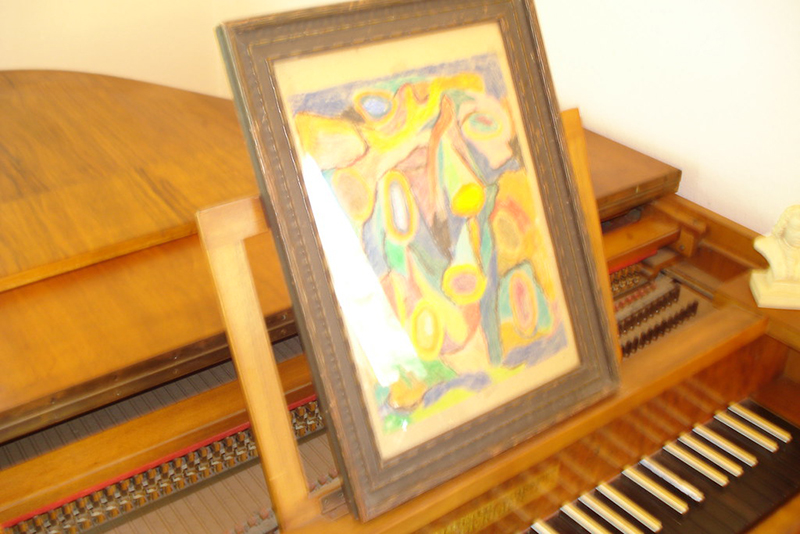 Christopher Wagstaff, the organizer, works with the Jess Collins Trust, and he is well known for his pioneering work curating and publicizing the work of the artists in the circle of poets Robert Duncan and Jack Spicer. His interviews with the leading lights of this undersung group are fantastic—a book of them would be a revelatory experience, and a game-changer for what we now think of as Bay Area art of the 40s, 50s, 60s and beyond. 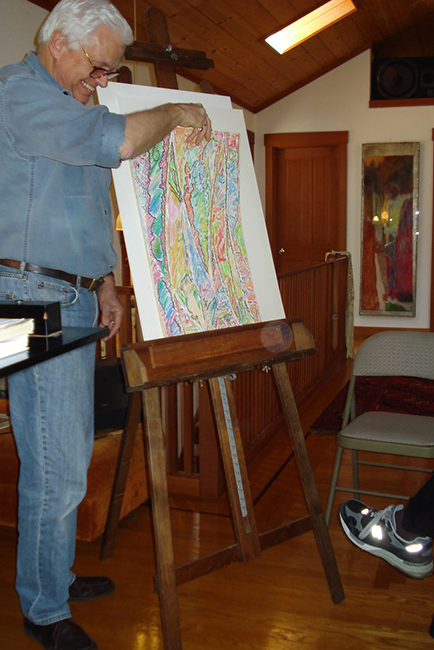 SFMOMA, for example, owns nothing by Jacobus. But canon-making was far from our minds that afternoon—except the prices were so crazy cheap! I have absolutely no room in my apartment for another Jacobus drawing, and yet how could I resist? They are so beautiful and “reasonable.” Wagstaff joked that these were recession prices; if I had gone to lunch by myself at Chez Panisse I would have spent more totally! I thought of getting like a dozen as Christmas gifts, but as I say, HJ is not for everyone and I might have lost some friends I guess. Some sheets had a drawing on each side, same cheap price! Now that’s value.

Christopher showed each piece on an easel, then another, and another, and then we looked at each one separately again. Then the crowd shouted out our favorites and we ooed and aahed about each of them. And then finally the drawings were laid in heaps on a long refectory table, vacant with beauty. The artist is still alive, he’s 85 or something, and lives in Fulton, Alabama, and all the proceeds of this little sale were going to be sent directly to him. Was it Fulton? Now I’m forgetting—something like that. Or was it Leroy? For some reason I’m thinking Leroy.  The drawings occupy the space between figuration and abstraction, and the stippled marks on the paper create a ripple of association every time I look at one.  Over the years, I have looked at one of these drawings hundreds of times, and seen something different in it each time—specific things, eerie and unpleasant things as well, for they function as Rorschach blots of the perverse imagination: oh look, there’s a little man throwing up; oh look, there’s a patch of violets on fire; wow, I never noticed before but there are children’s heads, rolling down a Mexican hill, surprise and bewilderment in their tiny rolling eyes. 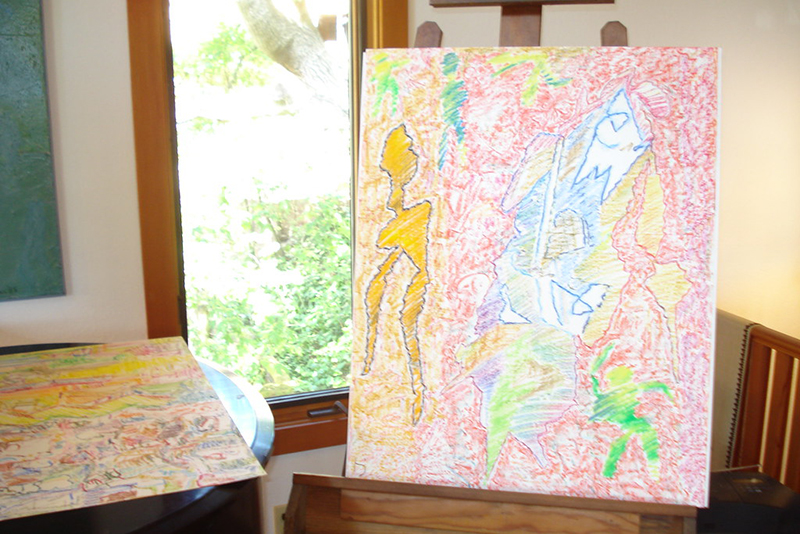