I saw this one doll had won the coveted Rondo award for best horror toy of the year 2008, and when I stopped laughing I fell in love. It is the new Barbie doll dressed as “Tippi” Hedren in Alfred Hitchcock’s horror classic The Birds. Heaven only knows the licensing fees that form the backstory of this one, but Mattel spotlights the Hitchcock name so avidly that you know his estate must be getting its cut. But what of Ms. Hedren herself? What’s she getting out of this, one wonders. America’s greatest actress is still alive and very beautiful at age 79 and she must approve in some fashion of this doll, and how do I know this? Because if you went on eBay and looked up this doll you can buy a copy she signed herself (comes complete with photos of her signing it, and of course, a “certificate of authenticity”). No living soul interested in Bay Area visual culture can turn their nose up at “Tippi” Hedren in The Birds, filmed largely right in our backyard in Bodega Bay. Jean-Louis, the designer, does he have an estate? Or can you just copy down to the tiniest detail the pale green wool suit he created for Ms. Hedren and just do so scot free? This blog is about image control and dissemination, so I should know the answers to these questions, but I come to you today as a collector. 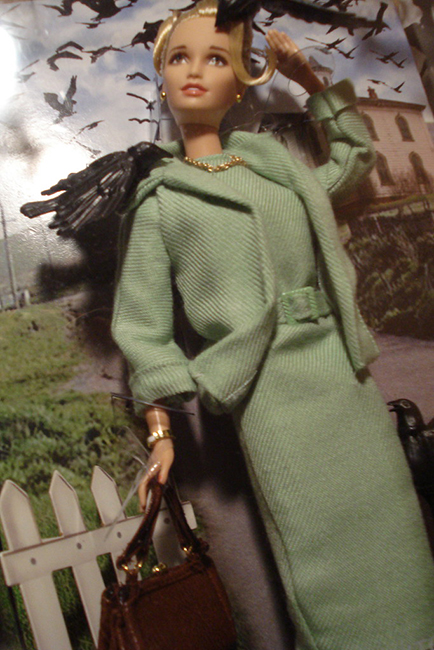 In mint condition still in the box: Barbie/”Tippi” Hedren golem

A collector without much room in his apartment. To make way for my new “Tippi” Hedren doll, I am having to give the axe to my only other doll–a mint condition Kylie Minogue doll from the Fever era, a gift from a treasured friend, a gift which has dominated the front room of my apartment for many years. It is a tragedy but it is a new rule of mine that every time I get something, I have to throw away or give away two of whatever category it falls into — in this case dolls! I love Kylie of course, but I will say one thing always kept me from totally embracing the doll of her–its utter lack of resemblance to the original–whereas the new “Tippi” Hedren Barbie is not, or so they tell me, actually modeled on Hedren’s own face, but it’s an amalgam of Barbie’s face with Birds-era makeup, and thus exists in a floating world, halfway between Barbie and “Tippi” Hedren — neither and both. Roland Barthes could do a better job than I at explaining the sinuous appeal of this simulacrum, but hopefully a picture will tell a thousand words. 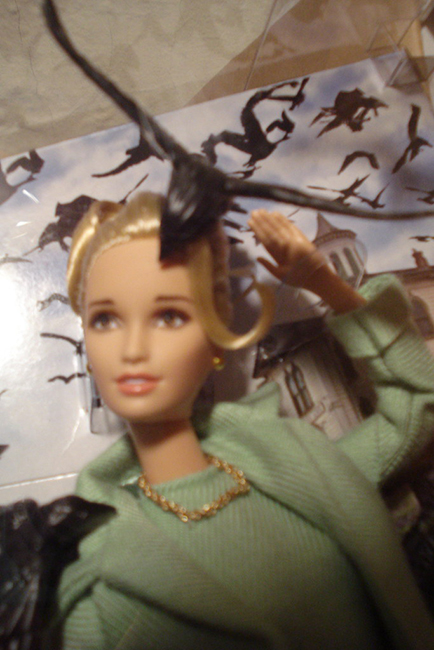 I asked my friend and colleague Gerald Corbin about this doll. He is the man I go to whenever I have a doll question which is frequently often. If he looks familiar to you, maybe you’ve seen him in one of my plays! A brilliant actor, designer, wit and improviser, Corbin has originated my roles in my theater, including playing both Jose Canesco and Barry Bonds (in different plays), as well as Jean-Michel Basquiat, Diana Ross, and celebrity stylist Maurice Anton.  Watch for him this fall as Will Smith in The Smith Family! 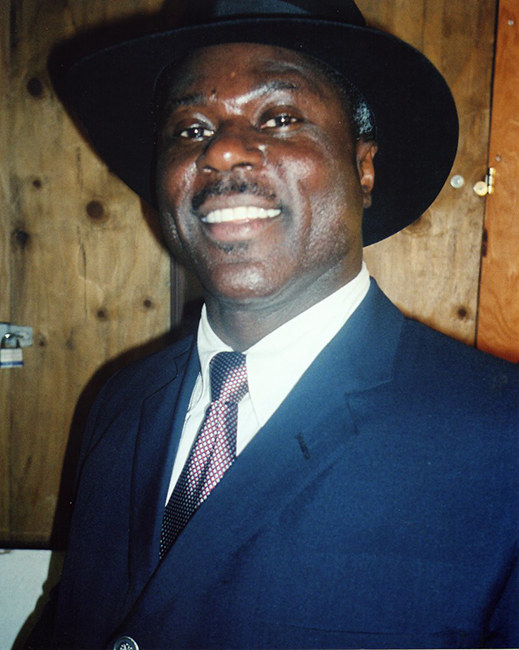 He tells me that for some time Mattel has been attending the fan world of doll shows, and watching to see what the fans have done with their Barbies. From this world of corporate surveillance on the rank and file, they spied one fellow doing his version of Barbie being attacked by a flock of birds, and went for it in a big way. They also have Barbie as Audrey Hepburn both in My Fair Lady and in Breakfast at Tiffany’s, and also Lucy and Ethel wrapping chocolates in the famous Job Switching episode. They also have one of Goldie Hawn the way she looked in Laugh-In, in the bikini with people writing jokes on her skin with paint! If that only had a Bay Area connection I’d show a picture of that. 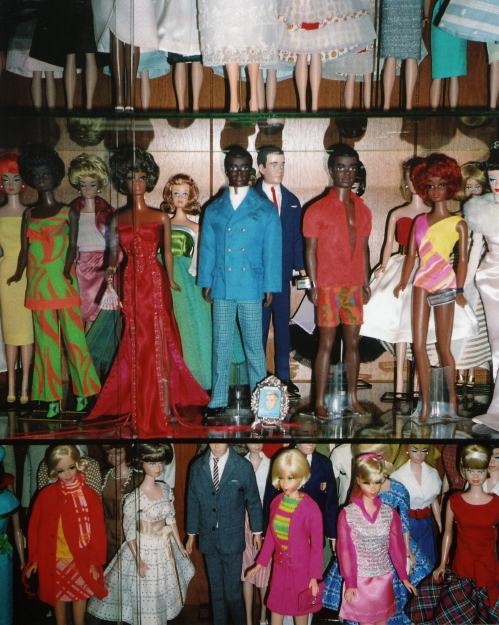 Just a few items from Corbin’s incredible doll collection, the passion of a lifetime.

(I hope my continual use of quotation marks around the name “Tippi” isn’t too precious, but real fans know that that’s the way her name appears in the credits of The Birds and Marnie, as “Tippi” Hedren.  It was almost as though Hitchcock had so much passion invested in his project that he was vainly attempting to put the brakes on by applying the ironic quotes ’round her name.  Or maybe quotes weren’t ironic in the early 60s?  Maybe it’s more analogous to the case of poet Louis Zukofsky and his long poem “A.”

Parents’ groups have wondered whether or not Mattel should be selling a doll for children in which the subject figure is being attacked by birds (and the reproduction makes the birds even huger in comparison, doesn’t it?). As a student of Bay Area visual culture I applaud their just not caring much about this question, though maybe they should have left it in the hands of the fans. So I like it, but I don’t like it, however audacious and magnificent it might be. 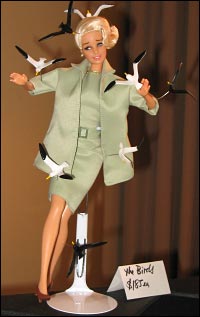 The “original” fan-made offering Mattel swooped down on.