The Context of No Context: Design in a Museum 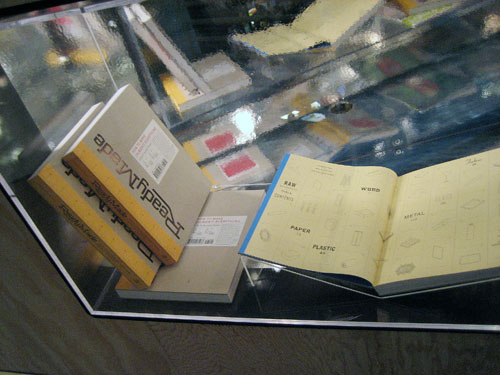 The ReadyMade book in the SFMOMA exhibit, Innovation by Design: CCA at 100, 2007

When the work of my design studio, Volume, was included in SFMOMA’s Innovation by Design: CCA at 100 exhibition in 2007—I admit it!—the elite glow attached to the setting was a huge part of the thrill. I could now tell my parents, regardless of how much they truly comprehended what I did for a living, that my work was now in a museum. That they understood.

When I later walked some visiting relatives through the exhibition, though, something funny happened. I started to explain the ReadyMade book and then, flustered from not being able to handle the piece that was hermetically sealed behind thick glass, said, “Screw it. Let’s just do this with one of the copies for sale in the museum store downstairs.” And so my presentation continued, but amidst the shopping din and ringing of cash registers rather than the solemn, contemplative air of the upstairs gallery. Such is the conundrum of the contemporary design artifact in an art museum.

I was reminded of this anecdote recently after reading (for a design course I was substitute teaching) Arthur C. Danto’s essay, “Art and Artifact in Africa” (from Beyond the Brillo Box: The Visual Arts in Post-Historical Perspective, 1992). Danto, discussing the difference between art and artifact (for which one could easily swap the word “design”), remarks, “In contemporary society it is very difficult to see or say what art does apart from being art. And our museums reflect this attitude, thrusting the work forward against blank walls in closed galleries under cruel illumination, asking only our response to them, not as part of anything, but as consummatory and self-contained presences.” There is no context other than the art itself in museum settings, and when this scenario is imposed on design, the work becomes divorced from from its original purpose and inevitably loses something in this transition. Danto concludes, “An artifact implies a system of means, and its use just is its meaning—so to extract it from the system in which it has a function and display it for itself is to treat a means as though it were an end.” Ask any designer if their work is just about the way it looks, and most will scoff and talk of intent, function, culture, or purpose. Once that design artifact is behind glass at your local museum, though, a small wall caption won’t compel the viewer’s mind to venture much beyond what they see. 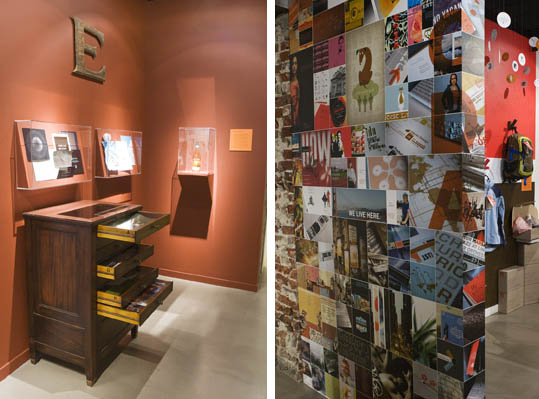 Just last week, I took my mother through the San Francisco Museum of Craft and Design exhibition (alas, now closed), San Francisco Graphic Design, in which my studio was featured. The show’s construction was a hybrid of curation and self-promotion—local San Francisco designer Michael Osborne assembled the artist lineup, but then left the work selection and display up to each of the designers. This made for a schizophrenic experience as radically disparate styles and exhibition approaches butted up against each other in SFMCD’s compact spaces. It’s also why the show was so fun. As Mom said to me, “So many different, creative minds all in one place…it’s very exciting!” 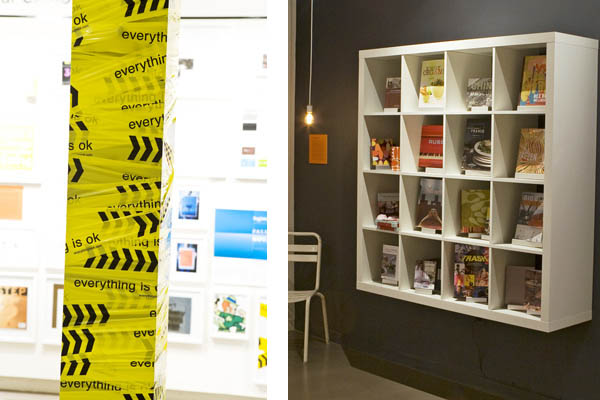 What might have been lacking in critical assessment or a unified philosophical skew was compensated for through the joyful eclecticism that embodies Bay Area design in general. Elixir Design meticulously arranged their equally rich and thoughtful work under specimen drawer glass in a vintage armoire. Chen Design Associates amplified their luscious form making with floor to ceiling wallpaper of the work’s tastiest details. Noon’s area was nothing but details—nearly 400 of them, each carefully cropped and mounted behind plexiglass, obsessively arranged in a grid. Mine displayed its “Everything is OK” tape as it’s meant to be used by wrapping an adjacent column. (Admittedly, I wish they had gone crazy with it in the museum’s front courtyard instead.) Sara Schneider left the books she’d designed out for people to leaf through and experience as they normally would anywhere else, while Chen, Mine and Volume also allowed similar interaction with some of their work. By forgoing conventional (dare I say, neutered) display methods, visitors were exposed to the philosophies and processes that joined these designers’ often disparate project types, and were given an opportunity to dig beyond the visual aesthetic that is so privileged when work is frozen and isolated behind glass. 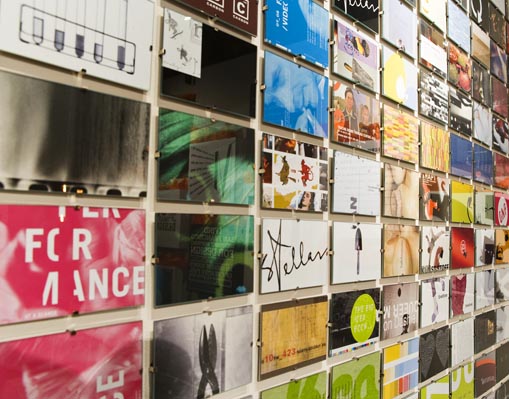 Placing design in a gallery setting allows one to appreciate the nuances that might be missed when it’s out fighting for attention in the hustle bustle of everyday life. It says, “This artifact is special, so please stop and give it a little more attention.” The SFMCD show inched toward proving that also celebrating the context, intent and process inevitably leads to more understanding and thus more appreciation. I look forward to more museum design shows slinking further down this path. I certainly know my mom does.