One on One: Elizabeth Gand on Leo Rubinfien

Alongside our new curator “One on One” talks, we’re doing regular ‘one on one’ blog posts, from curators, staff, and public, on a particular work or exhibition they’re interested in. Today’s post is from Elizabeth Gand, Assistant Curator of Photography. 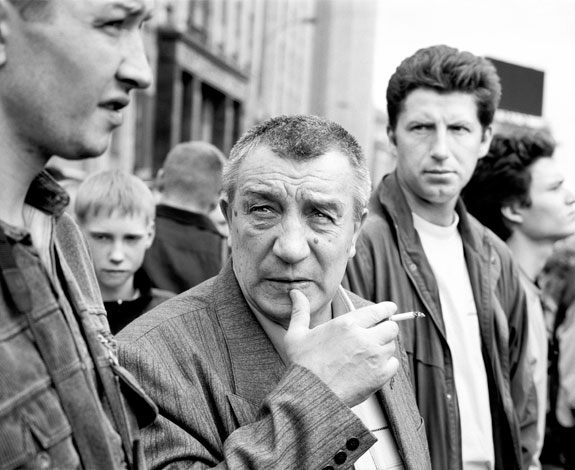 When crisis or calamity strikes, what can photographs do? All four photographers in the exhibition The Face of Our Time ask that question, but each takes a different path towards an answer. For Leo Rubinfien, the question has deep personal roots. In early September of 2001, Rubinfien and his family moved into a new apartment two blocks from the World Trade Center. On September 11th of that year, he found himself face to face with “the massacre across the street,” as he calls it.

The chaos, destruction, and agony of that massacre prompted Rubinfien to embark on a five-year photographic quest. He visited cities across the world that have suffered acts of cruel violence meant to terrorize the populace. In each city, he photographed the faces of people passing by in the street. Bombay, Benares, Buenos Aires, Casablanca, Colombo, Hebron, Istanbul, Jakarta, Karahi, London, Madrid, Manila, Moscow, Nairobi, New York, Seoul, Tel Aviv, Tokyo are all represented in Rubinfien’s photographic essay. Each city is personified by individual, anonymous citizens who gaze out from the picture with searing intensity.

For the April 16th “One on One Curator’s Talk,” we’ll look carefully at, and converse at length about, a single photograph from Rubinfien’s series. The single-focus approach is a worthy and exciting format (especially for our age of attention deficit disorder!) but it poses certain challenges if the piece in question is a photograph. After all, modern photography as a medium is all about reproducibility, multiplicity, the ability to produce mass quantity. And Rubinfien’s project is canny about those defining features of his medium; he makes them fundamentally part of the vision and purpose of Wounded Cities. 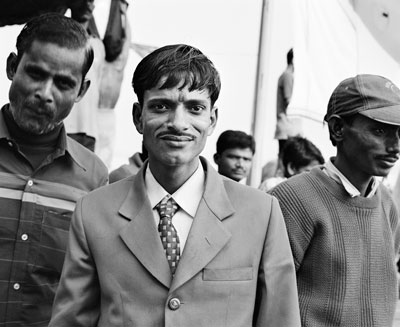 Consider, for instance, that Rubinfien made it his task to visit and photograph passersby in every city that has suffered an attack, no matter how far-flung across the globe. This premise relies directly on the camera’s serial power. As the crucial conceptual backbone of his project, this seriality has profound implications for the meanings the photographs convey to viewers. The pictures emphasize a tension between a sense of shared fate and the tremendously diverse individuality of people everywhere, all living with the weight of history and political conflict written into their bodies, in the expressions on their faces, and in the way their eyes look out at the world. Rubinfien took the tradition of street photography, which emerged within the explosive growth of urban living in the 19th century, and used it to produce a meditation on the global reality of political violence. His pictures coax us into acknowledging not just about our own vulnerability as Americans or New Yorkers but the vulnerability of every human body. 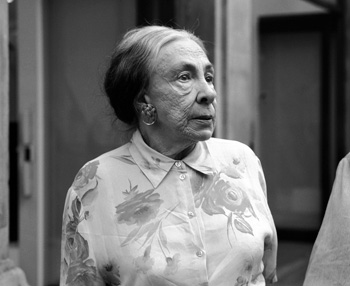 In thinking ahead to the One on One talk, I spent time with Leo in the galleries where Wounded Cities is on view. “Which photograph would you single out for conversation, if you had to pick only one?” I asked him. “That’s hard!” he replied. As we walked around the exhibition, studying the faces in the photographs, trying to discern which stood out as the right candidate for the talk, Leo would pause before a picture and say, “Maybe this one.” He suggested the man in Moscow at Okhotny Ryad [at top]– there’s much to say about the gesture he makes as he touches his thumb to his lips, the creases around his eyes and brows betraying the effort of an inner life deeply engaged in thought. But Leo lingered longest at the grandmotherly woman from Regent Street in London, who stands with such quiet authority and grace, her spine erect, her generous shoulders and bosom adorned by flowers printed on her blouse. “Look how beautiful she is,” said Leo. “There’s such a sense of consciousness in her face, and vulnerability.” He added, “She looks like Civilization gazing upon what it has wrought: ‘Is this what we’ve done?'”

As of today, I’m still making a final decision about which picture will provide our point of focus on April 16th. Please join us at 6:30 that evening to find out! I’ll be curious to hear what picture you’d choose. Our gathering will be, I hope, more of a conversation than a lecture. I’d like it to be a shared experience of observation and response, collectivity and individuality — and in that, very much in keeping with the spirit of the work we’ll be examining.

Tags: egand, Elizabeth Gand, Face of Our Time, Leo Rubenfien, One on One