SFMOMA associate curator of Public Programs Frank Smigiel arrived on the scene here a year and a half ago, and in record time he’s implemented a whole new SFMOMA programming vehicle, Live Art. This blog has been following his projects with interest, in part because of their boundary-pushing & often community-attentive nature, but also because, on more than one occasion, there’s been cabaret involved. Here Frank waxes prophetic (as opposed to nostalgic) on last year’s Valentine’s Day-era cabaret extravaganza Weimar New York: A Golden Gate Affair, and its seedling relationship to his ever-expanding set of Live Art programs. 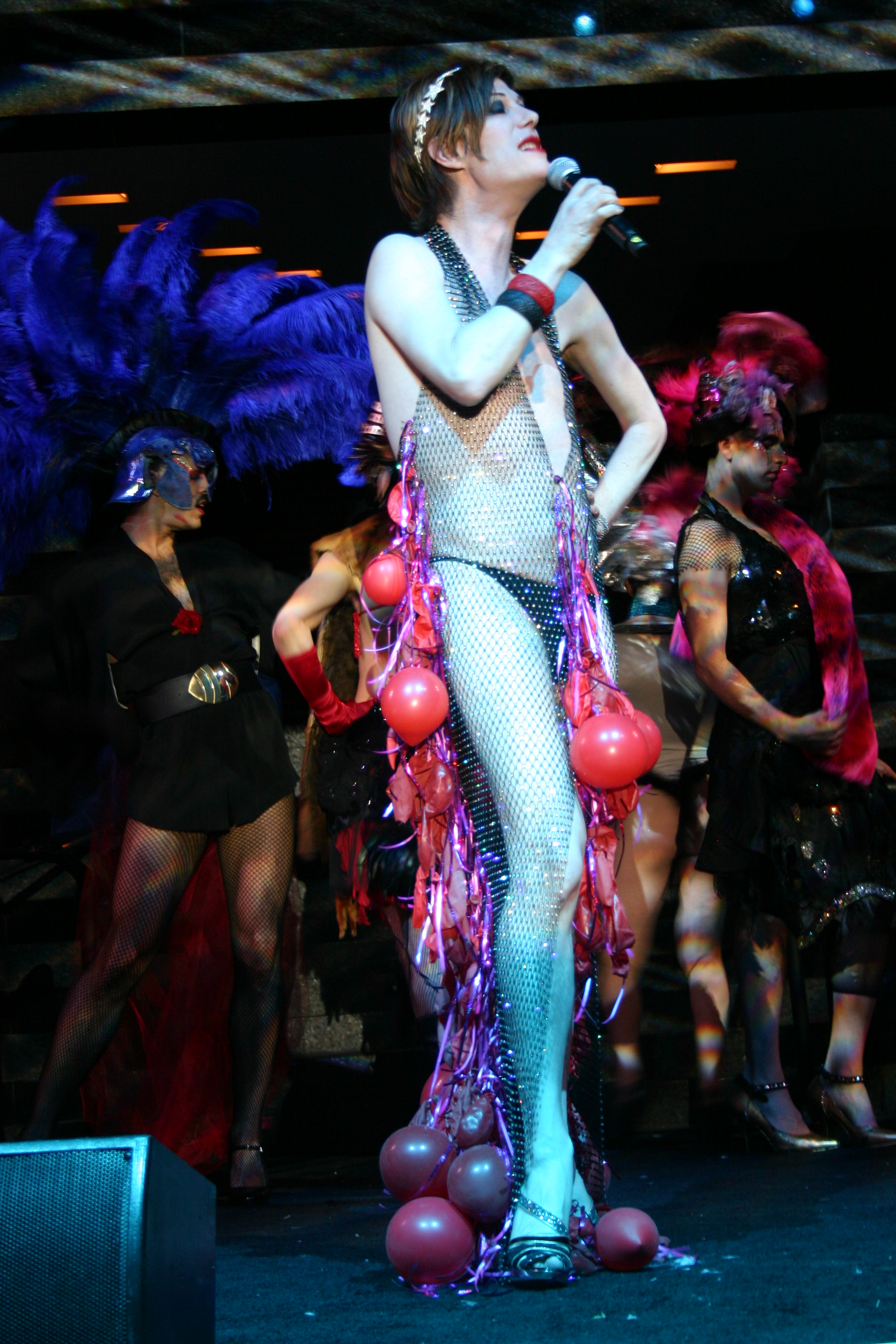 Just before the holiday weekend last year I was immersed in a week of activities surrounding Weimar New York, a radical cabaret created by curator, producer, and all-around downtown New York impresario Earl Dax. The show uses Weimar-era Germany as a rubric & reference to gather burlesque, cabaret, comedy, drag, and East Village-flavored performance artists. The goal: to sing, dance, strip, and think out loud about oppositional politics, sexual identity, dependence and independence, and living, as co-host Justin Bond tells us in his introduction, “between the first terrorist attack and the last.”

Weimar‘s thematics seemed suited to San Francisco, though SFMOMA as its stage might, at first glance, prove more puzzling. Many museums, seeing a nineteenth-century model of contemplation and civic edification coming unglued in our unending era of mass entertainment, have turned to the more popular models of live music, DJ sets, and Hollywood as a means of pumping new life blood — not to mention new bodies — into the museum-form. Yet it’s also true that many artists today turn to popular, or perhaps what I like to call vernacular, forms as a medium for their work. Neighborhood Public Radio (NPR) can run a low-watt, community-based radio station; the Center for Tactical Magic can dispatch its Tactical Ice Cream Unit to deliver ice cream and political pamphlets, tactics, and information; Lisa Anne Auerbach can knit fashionable sweaters that serve as calls-to-arms and not haute couture. 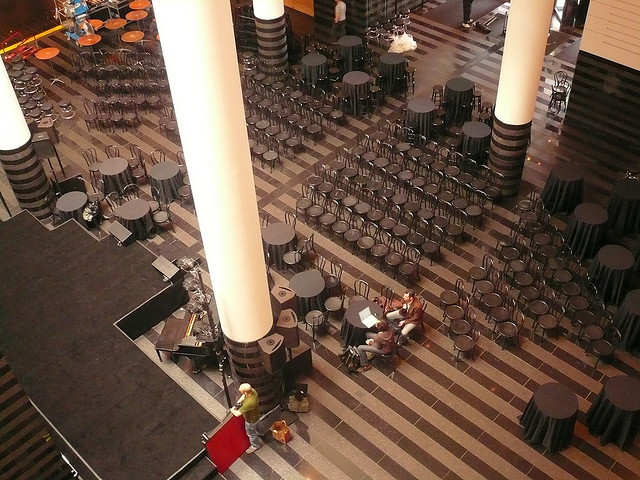 I came to SFMOMA with the hope of introducing a live strand of visual arts practice that might complement the gallery-based, exhibition-model SFMOMA has already been doing — for 75 years.  With a grant from the William and Flora Hewlett Foundation, we were able to launch Live Art @ SFMOMA: a series well documented on this blog and so far including Eve Sussman & the Rufus Corporation, Fritz Haeg, Rene Yanez, and Tony Labat. Next month, we’ll bring a version of Claudio Monteverdi’s opera The Return of Ulysses, reconceived by William Kentridge with the Handspring Puppet Company. Other upcoming artists on the Live Art roster include Mika Tajima/New Humans and Charles Atlas; Marie Lorenz , OPENrestaurant, Allison Smith, Rebecca Solnit, and so on. All of these artists, I would contend — and so all Live Art projects — seek to re-imagine relationships with audiences and to explore art-work through this new vision. In this, Live Art follows the model of the recent Art of Participation: 1950 to Now exhibition, and tries, like RoseLee Goldberg’s Performa biennial, to highlight the way live engagements with audiences have, across the last 100 years, revived art practices across visual culture.

But all of this began, for me, in many ways, with Weimar New York — and in Weimar, you can see the DNA of the Live Art series.

If you were one of the 800 + folks lucky enough to see the shows last February 13th (the durational cabaret model, leading cohost Ana Matronic to quip: “this show has now lasted longer than the Weimar Republic”) or the 14th (the tighter model, where Marga Gomez reminded us: “Thanksgiving and Christmas point out what’s wrong with your family; Valentine’s Day points out what’s wrong with you.”), I’m sure you had an amazing time. I am also sure you looked fabulous. But behind the amazing or the fabulous — and all the Weimar folks were amazing and fabulous —  was the fact that Weimar worked: as art, as entertainment, as a reinterpretation of known forms, and as a successful model of community imagined and achieved, even if for only one or two nights. 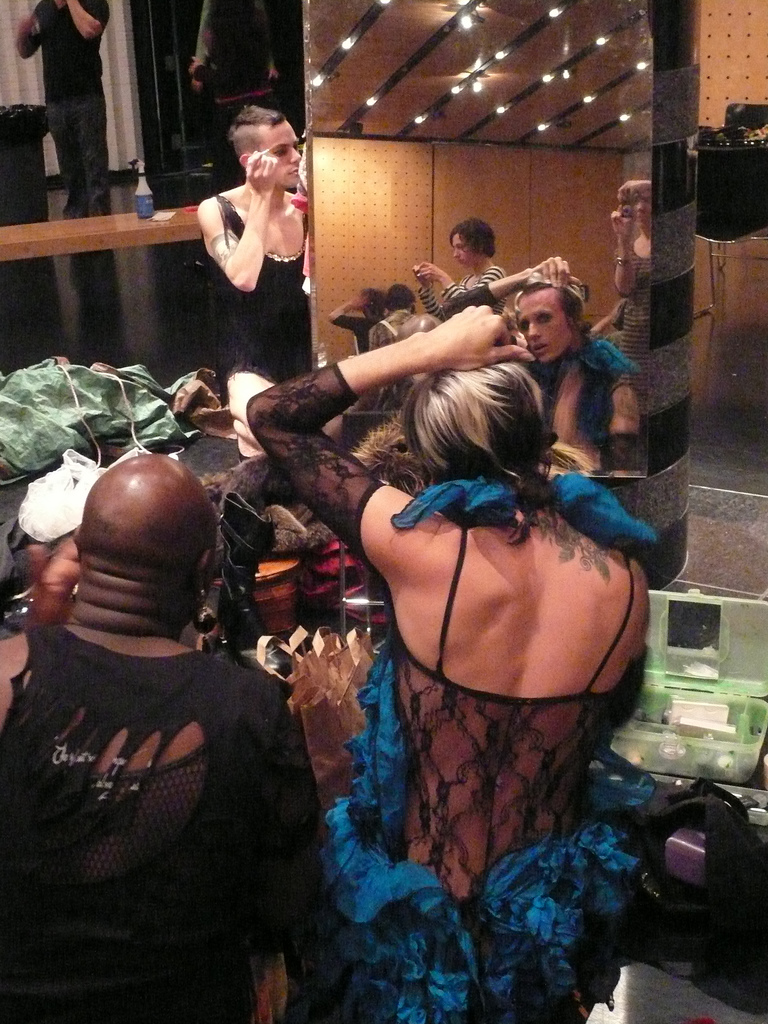 I might note that before New York and before Weimar, Earl Dax worked as a community organizer, at one time with LilyYeh’s Village for Arts and Humanities in North Philadelphia-a highly successful example of neighborhood-arts outreach and local transformation through the arts. Dax approaches Weimar New York as if it were a continuation of this earlier gig. Here’s Dax describing Weimar to Time Out New York: “I often refer to the work that I do as a kind of community organizing, among a community of artists that has been ravaged over the past 30 years by ongoing forces: gentrification, AIDS, defunding of the arts, the culture wars.”

And so it was in San Francisco. In our version, Weimar New York: A Golden Gate Affair, cohosts Ana Matronic and Justin Bond returned to the city where they became who they are; geographically far-flung performers like musical director Lance Horne, Daniel Isengart, Meow Meow, Novice Theory, and NYC-legend Penny Arcade made SF debuts; and SF-based artists like Harlem Shake Burlesque, Kitten on the Keys, Veronica Klaus, Stephen Pelton, Vinsantos, and Paula West showed why everyone should move here in the first place. In my own memory of Weimar, behind-the-scenes and backstage, a small community was born-as I know it was in the performance space itself. No real gulf here, between star and fan. Instead, artist and audience act as co-conspirators, old friends, lovers, or attractive strangers. Weimar brings a certain glitteratti together and suggests that, with just a touch of the right make-up, we’re all back-stage and with the band. Improbably together. 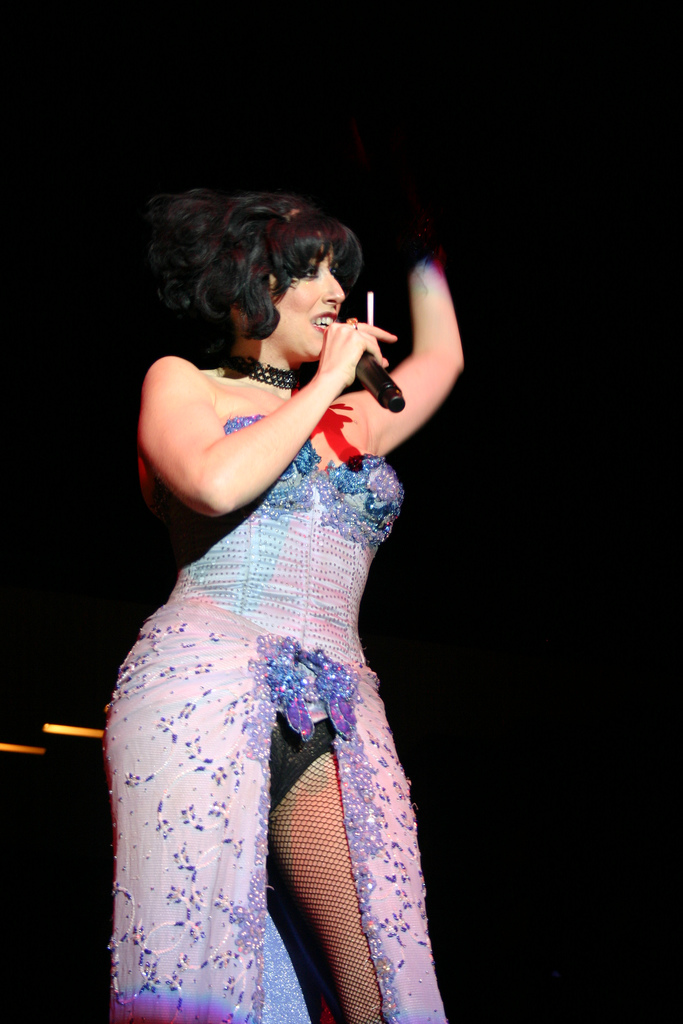 I titled this piece “My Weimar” after a Dave Hickey essay in his Air Guitar: Essays on Art & Democracy — but I was re-reading the book yesterday and realized I had the wrong essay. I was thinking of a piece, “Shining Hours/Forgiving Rhyme,” where Hickey remembers his jazz bohemian childhood in Texas, when his dad gathers an unlikely cast of characters to jam at their house. Hickey’s wife reads the draft essay and tells him “it would be read as an allegory of ethnic federalism in which two African-Americans, a Latino, four Irish-Americans, and a German Jewess seek refuge from the dominant culture in order to affirm their solidarity with the international underclass.”

Hickey “squealed”: “But it was not that way at all.” He goes on to imagine how the scene could be rightly rendered, in all its potential sentimentality, utopian promise, and real-life deal. He decides only Norman Rockwell or Johnny Mercer could have figured this one out, replete as they are “in an atmosphere of generosity and agreement,” albeit one always devoted to the exception and never the norm, one sensitive to the nuance and the individual, one critical of the category.

It is this spirit I always recognize in Weimar New York. Weimar is always many things: entertaining, educational, naughty, satirical, affirmative. It’s about complication and contradiction, not always consensus (though the Boos! at conservative politics are there too). It’s about history and the now. And it’s all these things because of who it gathers: an improvisational, unlikely, even outrageous cast of characters, who cook up a rhythm and riff just so. As my model for Live Art, Weimar nods to projects like these: the jam band that starts together, even if it ends apart. 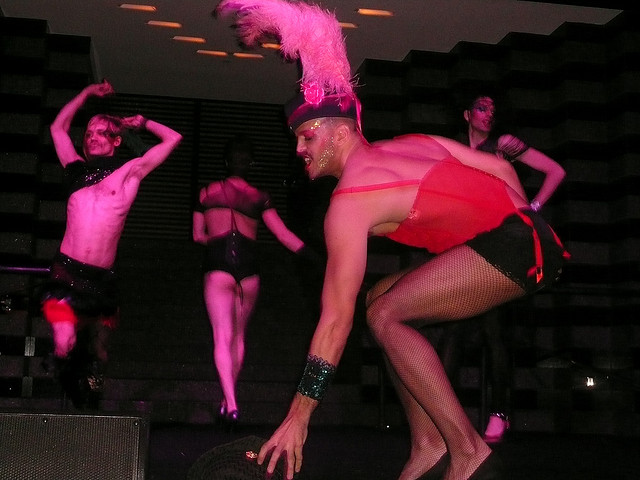 CODA:
Hickey’s actual “My Weimar” tells the story of his Weimar Theater professor, Walther Volbach. Herr Volbach, a refugee of that time and place, tells his idiosyncratic story: all the 20th century wars draw off the “Aryan muscle-boys” to fight, and when the Aryan muscle-boys get back, they find “the culture of their nation being run by effeminate, Semitic, commercial pansies!” The AM-B can only fight back by seizing public cultural power, via government and universities:

“So all the muscle-boy artists and writers, they will become professors and darlings of professors, and they will teach the young to revere their pure, muscle-boy art, because it is good for them, and they will teach women and Jews and queers to make this muscle-boy art too. And it will be very pure, because they are muscle-boys and they don’t have to please anyone. So there will be no cabaret, no pictures, no fantasy or flashing lights, no filth or sexy talk, no cruelty, no melodies, no laughter, no Max Reinhardt, no Ur-Faust, no A Midsummer Night’s Dream. And nobody will love it.”

He also adds that “nobody will pay money to own it or see it” — because money is “a Jew thing, a queer thing, and a silly woman thing” — though it’s quite the artist’s thing. Herr Volbach concludes: “So all you Aryan muscle-boys down there at the end of the table, Don’t be Aryan muscle-boys! I have seen enough official culture. I will teach you how to hit your marks and set the lights and make the tempo float. The rest you will have to learn from women and queers — out in the dark.”