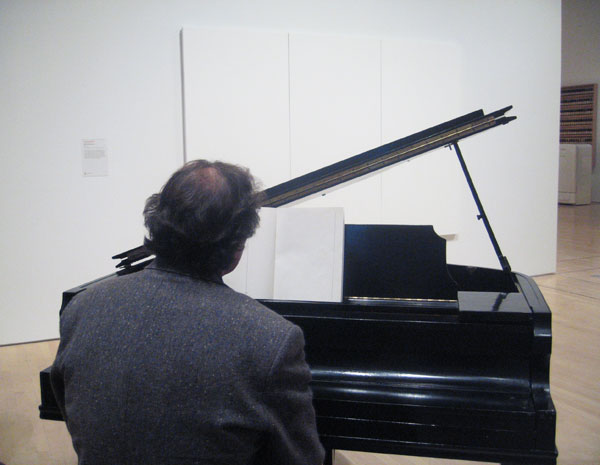 David Bernstein, Head of Music and Professor of Music at Mills College, demonstrating 4’33” for staff performers, back in early November. On the piano is the Irwin Kremen 4’33” score in proportional notation, and behind the piano is Robert Rauschenberg’s White Painting (Three Panel).

Throughout the run of the Art of Participation, we’ve been treated to daily performances of John Cage’s seminal work 4’33”, a composition of silence lasting — well, yes — four minutes and thirty-three seconds. A score of ‘silence’ highlights ambient sounds surrounding the performance. Cage was influenced by Robert Rauschenberg’s White Paintings, and together these two works form the opening or entrance to the exhibition. Below, SFMOMA visitor services attendant Michael Zelenko, on what it’s been like to experience 4’33” day in and day out, for the last three months. There’s also a nice YouTube clip with Cage discussing silence, here.

Once a day, six times a week, four weeks a month, for almost three months…I’ve seen John Cage’s 4’33” performed at least three dozen times while I’ve been working part-time as a gallery attendant on the fourth floor. Maybe I needed to see it that many times in order to let the whole thing develop, to ripen. My feelings toward the piece have gone from veneration to frustration, fascination to boredom, and finally, in these last few weeks, a return to reverence. I now experience those four-odd minutes as a resting place in an otherwise scattered work day.

Over the weeks, my attention has shifted inevitably from the performance to the audience. On the wide spectrum between befuddlement and admiration, most visitors’ reactions fall somewhere in the middle. However, after a few weeks I realized that those listeners at either end have a common reaction–total and absolute silence. Admittedly, the completely attentive individuals are rare, but they have contributed more than their fair share to my experience. I remember in early December when an elderly Swedish music professor stood riveted next to the piano, intensely focused during those four and half minutes. Afterwards, he shared with me his theory regarding the length of the composition in a hushed tone: the 273 seconds that make up the piece are possibly a reference to -273 Celsius, or absolute zero, when all molecular motion stops, or at least reaches its minimal state, a sort of molecular silence. These audience members –the fans — are my favorite because they stick it out, smile, and applaud warmly when the performer stands up from the bench.

On the other hand, I’ve repeatedly heard the story of a visitor who brazenly tapped a performing staff member on the shoulder, asking for directions. When someone from the audience whispered that they were interrupting, the visitor stepped back in disbelief, as if suddenly awakened. For the most part though, visitors patiently watch the pianist for a couple of minutes before they look at each other and, smiling sideways and shrugging their shoulders,they move on. Others don’t stop at all, but simply throw an awkward glance in passing.

After almost three months, I’d yet to do the honors myself! So it was with excitement that I finally sat down behind that ominous looking piano last week. I have to admit I was a bit nervous. As the seconds ticked by, I began hearing the kinds of things I’d overlooked during all those other thirty-six performances: the droning tones of laughter from Kit Galloway and Sherrie Rabinowitz’s Hole-In-Space or the abrasive sawing of Hans Haacke’s News printer, both installed nearby; and finally, a woman singing, right next to me, in front of Nam Jun Paik’s Participation TV, blissfully unaware she was engaged in two pieces at once, Paik’s and Cage’s. At some point during the third movement, as if orchestrated, all these previously unacknowledged sounds seemed to come together. It felt to me as if the museum itself was performing for us. When it was all over I turned to the audience and heard the pitter-patter of applause, not quite sure who it was for.

Michael Zelenko lives, works, writes and studies in San Francisco. He is currently a writer for Where magazine.