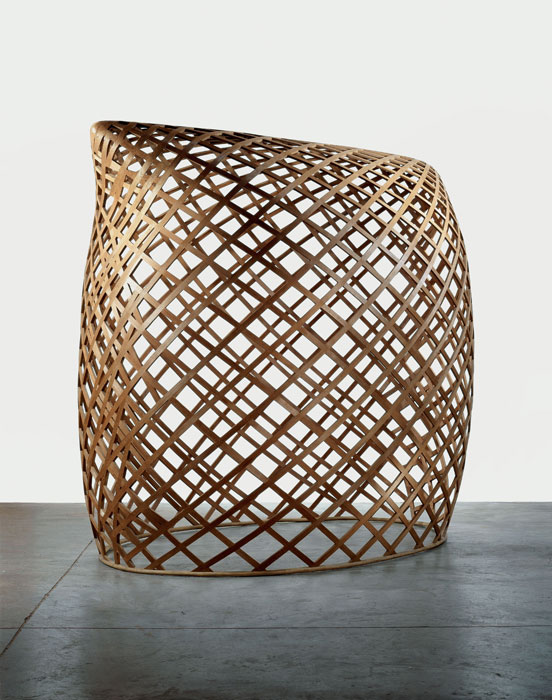 One of the things I love about art is the relief I feel, when looking, from having to always think in language. This leaves me a bit at odds with the demands of a day job — in an art museum no less — that requires at least some amount of thinking through writing. I often take walks into the galleries to catch my breath, & to rest by walking, looking, and seeing. Of late the best rest has come in the fifth floor galleries: Open, expansive, and with fantastic light from the new glass wall which will look out onto the sculpture garden, the fifth floor is beautifully laid out right now with the Martin Puryear exhibition. The sculptures, large in scale, and strange, tactile and approachable, do remind me of one of the reasons I took a job in a museum in the first place: to look. However, my fifth-floor visits have also been fraught with a follow-on frustration: I am always left speechless, and the job does require I occasionally find something to say about the art.

Finally, though, it strikes me that my own slow unwinding of a beginning isn’t unlike Puryear’s painstaking process of making these works. Puryear, who began first as a painter, turning early to sculpture, and who has spent a life as a sculptor learning and refining woodworking processes from all over the world, often works slowly.  It takes time to bend a strip of wood, to split a sapling. The docent said, He’ll keep a piece of wood in his studio for years, until — like Michelangelo and the proverbial block of marble — it reveals something that lets Puryear know what to do with it. Those wagon wheels — found on a farm in France — were in his possession for fourteen years before he made Ad Astra. This kind of labor takes time. You take one part, you work it, and you put it together, eventually, with some other kind of part.

There’s something present in the many metaphors current in the media right now, of the ‘hard work ahead’  and the need for patience, vision, and labor, that continually evoke, for me anyway, the labor of hands, specifically the labor of hands in relationship to ideas, and this hasn’t been far from my mind while looking at these sculptures. Puryear uses a lot of natural materials (among them tar, rawhide, wire mesh, stone), but wood especially always seems to me to be something we understand in an almost familial way, its workability seems — if properly labored at — open to anyone. It’s the renewable, combustible engine of that foremost human centralizer and organizer: the hearth, and almost everything we have to rest on or shelter in has some presence of, or relationship to, that material. And the hand-working of the wood in these sculptures is often visible. In Brunhilde [at top], up close, you can see the many tiny holes left behind by staples used to help bend the wood into shape.  A hand stapled the strips of cedar and a hand pulled the staples out.

In an interview with David Levi Strauss in the Brooklyn Rail, Puryear described Ad Astra, and discussed the provenance of the title: “…the new piece has a very long sapling attached, like an attenuated shaft for the wagon, stretching upward “to the stars.” There are two Latin phrases the title derives from: Ad astra per ardua, meaning “to the stars through difficulty,” and Ad astra per aspera, which translates as “to the stars through rough things or dangers.”

I’m the hopeful type; I like transcendent metaphors. Standing in front of the work A Distant Place, the docent said, quoting Puryear, You begin in one place and you arrive at another, by slow process. It took a little time for me to be able to know what to say adjunct to the sculptures of Martin Puryear, but how about this, as a well-wishing for a new year, new presidency, new economy, in what are supposedly dire times: ad astra per ardua, ad astra per aspera.