This Saturday, as part of our “Vegas Highs, Vegas Lows” film series, and timely to our winter holidays, we’ll be screening Bay Area filmmaker Caveh Zahedi’s I Don’t Hate Las Vegas Anymore. Winner of the prestigious Critic’s Prize at the Rotterdam International film festival, this real-life documentary comedy follows Zahedi on a road trip to Las Vegas with his father and half-brother, in an attempt to prove the existence of God. When it isn’t going in the direction he would like, he attempts to force God’s hand by trying to persuade his father, half-brother and a heart-sick sound recordist to take Ecstasy with him. All thanks to Caveh for this backstory introduction to the film. 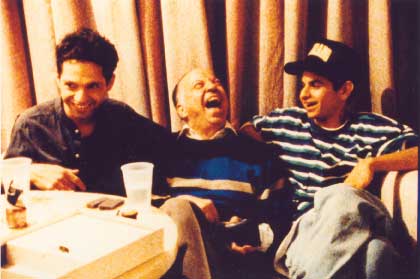 When my first feature, A Little Stiff, premiered at the Sundance Film Festival, I took the opportunity to pitch a dozen or so ideas to film producer James Schamus (now co-president of Focus Features). Of all the ideas I pitched him, his favorite (which he offered to produce) was also the least commercial — a film about taking a road trip to Las Vegas with my gambling-addicted Iranian father and teenage half-brother. Career-wise, it was so counter-intuitive to make that my next film that I decided it must be the right thing to do.

Since I didn’t really know how to write a script, I decided to travel to Las Vegas with my father, my half-brother, and a tape recorder. I figured I could just record our conversations for three days, transcribe those conversations, edit them down to a ninety-page script, and voilà. Which is exactly what I did.

I submitted the script to James Schamus who tried but failed to raise the $200,000 needed to make it. After two years of rejection letters, I finally got a grant from the American Film Institute for $20,000 to shoot the film. Because much of the film took place in a Las Vegas casino and some of it took place underwater (in the casino’s swimming pool), it wasn’t possible to shoot the script that I had written (or, more accurately, transcribed) on that budget. What to do?

I called the American Film Institute and explained my predicament. I also explained to them that while waiting for the funding to come through, I had written another script entitled I Am A Sex Addict which I would rather shoot instead, if it was okay with them, simply because it was more recent and seemed more commercially viable. They explained to me that I could depart from the original script as long as I kept the title and the original premise — in this case, a weekend road trip to Las Vegas.

I was broke at the time and didn’t want to say no to $20,000. So I agreed to shoot a film with that title and premise, and set about trying to figure out how to do it for $20,000. What I decided to do was to throw out the script and just re-enact anything interesting that happened on the trip, immediately after it happened. This quickly proved impossible to pull off, mostly because it became clear almost immediately that my father couldn’t act.

So the film became a kind of documentary about this second trip, although this time there was a camera crew who became the secondary characters in the film. I brought some Ecstasy along to spice things up just in case nothing interesting happened, and what actually did happen I never in a million years could have imagined.

I spent two years editing the film (which was shot in 3 days) and submitted it to the Sundance Film Festival. Because I shot and edited on film, the tape splices broke during the projection and the Sundance programmer, angry that I had wasted his time, called to tell me that I would have to send him a VHS copy. I later heard through the grapevine that he HATED the film, and that he spoke vituperatively about me and the film for years afterwards. I soon learned that he would not be the only person to HATE my movie.

Whereas my previous film had been bought by both the Sundance Channel and German Television, this film never made a penny. It basically destroyed (irrevocably?) my once-promising film career. Despite winning the Critic’s Prize at the Rotterdam International Film Festival when it premiered there, the film was panned by almost every single American film critic and reviewer. One rather eminent critic called me a “twerp.” I was depressed for a year.

A few years later, I met Michael Stipe, the lead singer of R.E.M.  I told him how much I loved his songs, and he asked me if I was the guy who made I Don’t Hate Las Vegas Anymore. “You’ve seen it?” I asked him. He told me that he had, and that it had become a cult film in Athens, Georgia. That was the first time I’d heard anyone talk about that film as a cult film, but I heard it again and again over the years.

The film is almost impossible to find. It has never been released on DVD, and it has long since been out of print on VHS (the company that distributed it eventually went broke). I couldn’t even get the master back from the lab because the distributor never paid them and they were holding my film as ransom.

But time has a way of changing things. What is unquestionably my least successful film ever is, in the eyes of many, the best film I ever made. Many people who hated the film when they first saw it have since come around and now like it. I’m not sure how to explain this. Was it ahead of its time? Has the world caught up to it? Was it just bad timing?

In any case, it’s a film that is very close to my heart. I started dating my current wife after she saw the film and fell in love with it. Without this film, my life would have been completely different.

Caveh Zahedi received a B.A. in Philosophy at Yale University and an M.F.A. in Film Production at the UCLA School of Film and Television. His feature-length films include A Little Stiff (1991), I Don’t Hate Las Vegas Anymore (1994), In The Bathtub of the World (2001), and I Am A Sex Addict (2005).