We have a fantastic pair of Jarman films this Saturday for your holiday weekend, and I have to say that, for my part, I can think of no better method of recovery from over-familial holiday indulgence than a good dose of hours in the Wattis theater watching movies. Plus, nearly four hours with Tilda Swinton? Who would refuse?

The line-up is: The Garden (1pm) and Wittgenstein(3pm). Gina Basso tells me the pairing is partially a matter of print-traffic timing and partly an oblique reference to “home”. Many readers will know that philosopher L. Wittgenstein also took a foray into architecture, designing a house for his sister, with architect Paul Engelmann, at the sister’s behest. Jarman, on the other hand, was a gardener as well as filmmaker: when he was diagnosed HIV-positive, he bought a fisherman’s cottage in Dungeness, Kent, and spent the years from 1986 until his death in 1994 designing and building the garden which surrounds it, and where the The Garden was shot.

Thanks to one Lady Vervaine for this picture I lifted from Flickr, of Jarman’s real garden (LV describes the picture as a recreation of an important scene in the film, so if you’re here Saturday, look out for it).: 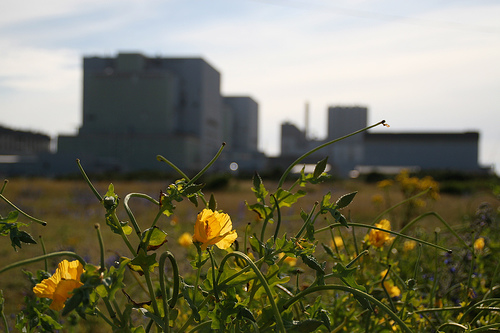 There’s also a cool Flickr set of the whole garden here, by someone named Angus Fraser. I was surprised to see the pictures, as in my ill-traveled American ignorance I never think of any part of England as looking so inhospitable & bleak as a Southern California desert. There’s a lot of rock, stone, and cactus here, and it’s illuminating to note that Jarman set his film here as a garden of Eden. And keep an eye out for the greying hull of some sort of small ship, set against an awfully blue & wonderful sky.

As to Wittgenstein, this is Jarman’s depiction of the life and philosophy of. IMDB describes the film thus:

A dramatization, in modern theatrical style, of the life and thought of the Viennese-born, Cambridge-educated philosopher Ludwig Wittgenstein (1889-1951), whose principal interest was the nature and limits of language. A series of sketches depict the unfolding of his life from boyhood, through the era of the first World War, to his eventual Cambridge professorship and association with Bertrand Russell and John Maynard Keynes. The emphasis in these sketches is on the exposition of the ideas of Wittgenstein, a homosexual, and an intuitive, moody, proud, and perfectionistic thinker generally regarded as a genius.

A review of the film is here (at my favorite cinema blog, Only the Cinema) and here you’ll find a review of both screenplays, which were published together by the British Film Institute.

If you want to do a little prep but don’t feel like trying to get through the Tractatus after your turkey and stuffing, you can watch a nine-part mini YouTube course (a bit weird) re Wittgenstein on language & logic here.

And here’s a short clip from the film itself, which gives a great sense of the mood, the style, the discomfort, the themes, AND Jarman’s humor, all in under two minutes:

We’ve been promising roundtable discussion on the Jarman films, and will give you a dose of it starting early next week with a lovely essay by James Mackay, producer of many Jarman films, and further conversation as the week continues. Come join us in the theater and talk a bit with us here on the blog. You can find all the postings on Jarman (including a week’s worth of music videos) here.