Tony Labat’s I WANT YOU: Round One: Solo Auditions At least fifty auditionees/sloganeers turned up for round one of Tony Labat’s I WANT YOU project this Thursday last, to deliver their I Want You to…imperatives to Tony and his team of celebrity(esque) judges. The bound, wailing creature above was one of the more curious and dramatic of the auditions but, interestingly, not the only performer to eschew actually speaking a demand.

Outside the theater, the Atrium looked a bit like any downtown casting call: The auditions themselves were a bit unlike anything the Wattis stage is likely to have seen before: And there was at least one inside job: 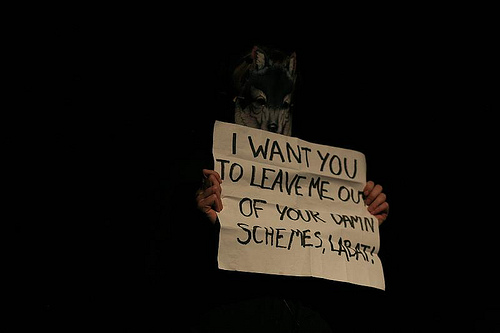 Overall it was a deeply SF/Bay-style set of demands & performances: There was a lot of half-nudity, a fair amount of enviro-positive, sex-positive demand (I want you to ride your bike, I want you to be nice to sex workers), a bit of silliness (I want you to eat your vegetables; I want youtube), and—at least in the round of 20 or so auditions I got to see—a surprisingly small amount of sloganeering directly addressing the upcoming presidential election.

One of the more amusing moments of the night, for me, came backstage, where I was standing in the stairwell text-messaging myself notes on the auditions. A woman in a black sparkling dress, next up to perform, was being outfitted with a wireless mic but explaining to the tech that she was going to take her dress off when she got on stage. A curious conversation ensued, regarding the limited options as to where this bit of technology might then most logically be affixed. She delivered her imperative (I want you to love your fat, beautiful body) while performing an old-school trick with tassles.  One judge’s response? “Now there’s a poster!”

Of course, this was only the first round, and the public performance/vote-off is still ahead. The judges have narrowed the field to THIRTY FINALISTS who will compete THIS THURSDAY, SEPTEMBER 11th, onstage, American-Idol-style, in front of a live audience (THIS MEANS YOU). The audience will choose the five winners, who’ll have their slogans made into posters Tony will plaster around town between now and the November election.

All photos: Aimee Friberg. The Flickr set is here.