How many Fridas does it take to… 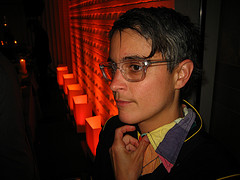 I attended the Frida Kahlo opening last night and took Andrew McKinley as my chaperone. Andrew, if you don’t know, is the charismatic owner of Adobe Books. He’s also a notorious flirt. Since I was horribly underdressed, my chaperone offered up a vintage, silk shirt that he found in the bottom of a box of books that had probably been molding in his car since 1988. It smelled ok, so I put it on, draping it over my usual patchwork clown look. We made a bee line to the bar. Lucky for us Mendillo was ordering just as we arrived and ordered up some whiskies. We headed toward the food: ceviche in tiny plastic cups, far too small for the giant tri-colored corn chips that were meant for dipping. I broke the chips into smaller pieces while balancing my drink on my elbow. The waiter brought out gazpacho. And I started for it, but then stopped. There was something in the news lately, about tomatoes. Was it a good or bad mention…I couldn’t recall the hard story. Something about cancer I think. They cure cancer! Cause cancer? High in vitamins? Salmonella? E-coli? Lock jaw? I stepped away from the gazpacho. Photographers snapped pictures of the guy from coat check-dressed in Frida drag. He looked quite good, but I thought my natural ‘stache and eye brows made me a more subtle dead ringer. Whatever! I spotted Dominic, empty handed. He explained his aversion to free drinks and his preference for paying. I assumed it was a form of masochism having something to do with his recent fascination with Fassbinder and Berlin Aleksanderplotz. I suggested he work through it by tipping the barkeep extravagantly. Suzanne said, for next time, we make a video, where we pose the question: “Have you been upstairs yet to see the show?” I took some really blurry pictures. Thankfully, Jessica Whiteside was there and took some really good ones.