Offering another view of the unfolding Berlin Alexanderplatz narrative, field correspondent Dana Ward is reading the novel but NOT watching the film. Welcome, Dana!

Hey Brandon & Cynthia & Suzanne, & nice to meet you Dominic & Julian & Stephen & all readers. My name is Dana Ward, & Suzanne asked me to act as a correspondent to y’alls roundtable concerning Fassbinder’s “Berlin Alexanderplatz” by reading Döblin’s novel, something I’d wanted to do and not found an occasion to– so I happily accepted! As such I’m reporting here both from the world of Döblin’s book and from the world of Cincinnati, Ohio. I’m following a few paces behind I think, though in having finished the “Third Book” as Döblin has it, I think I’ve about caught up. 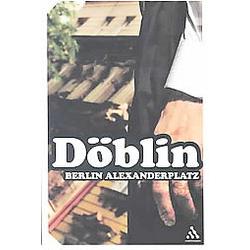 First, the Continnum edition of the novel I’m reading is delightful as an object: a two-pound glossy rectangle with titles printed in what looks like the default font for thought-forms in Teletubby consciousness. This contrasts somewhat gruesomely with a close up of our man Franz’s bloodied sausage fingers dangling out from a pristine white shirtsleeve.

Döblin’s a fascinating writer, and the translation (by Eugene Jolas) is totally engrossing. I don’t have any German as they say and as such can’t vouch for anything more than the magnetic readability of the text, but I do vouch for that! Something I want to ask: in the novel sometimes we leave Franz and the ‘eye’ of the book floats away through Berlin, to some tragic or comic social incident manifesting a significant aspect of Weimar life. Wondering here if Fassbinder weaves these flights into the plot or stages them, intact and discrete, as they are in the novel? Much of this shading constitutes the books best bits so far.

I agree with what’s been said here regarding Franz’s subject positioning. He seems to be someone in search of an insoluble category to inhabit. Döblin suggests at times that ‘prisoner’ was that very category. Confronted with the ambiguities of social reality in Berlin, Franz usually gets pretty weepy for life behind the gate (“closed, as any good gate should be”). The transposition of prison life onto the unruly and uh…differently mediated experience of urbanity seems his fondest wish.

Too, I keep thinking of this idea, that perhaps Franz is some kind of anti-flaneur? He wanders aimlessly but resents modernity, his drifting is done under the auspices of work & his desired destination is an ill-defined horizon of “order” and “peace”. Franz himself is groping constantly after their tonic effect, this set in relation to the myriad homeopathies offered up by contemporary consumer culture, which in the novel occur as enormous catalogues that appear jarringly amid plot points and dialog.

So we’re seeing the channels through which Franz’s violence is routed, & its destination object is usually women, with the occasional communist thrown in the mix. Despite his occasional hangdog moments, he’s been on the whole an unsympathetic figure.

Such great pleasure and mystery in writing this and being in dialogue with all of you, not knowing at all what Fassbinder has or has not included and when. What aspects of the text has he seized on and elaborated, what aspects has he neglected entirely? I love all these blank spaces. Anyway, much looking forward to hearing from all of you on the next installment.

Tonight! Round 2: Part 4 – A Handful of People in the Depths of Silence – Part 5 – A Grim Reaper with Powers from Almighty God – Part 6 – Love Has Its Price – Part 7 – Remember: An Oath Can Be Amputated