In what will become a regular feature, we’ll invite a local writer, artist, visitor, or observer to respond in whatever manner they choose (given the limits of blog-hosting technology) to an exhibition, public program, film, or object on view. In this first installment, poet Eleni Stecopoulos reflects on the An-My Lê exhibition, Small Wars, on view now through May 4. 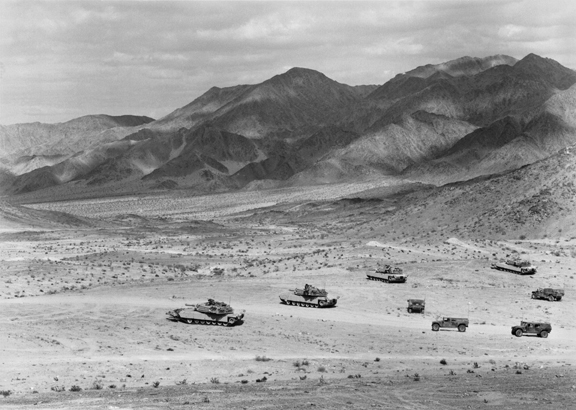 American development has exhibited not merely advance along a single line, but a return to primitive conditions on a continually advancing frontier line…this perennial rebirth…this expansion westward with its new opportunities, its continuous touch with the simplicity of primitive society, furnish the forces dominating American character.
— Frederick Jackson Turner, The Frontier in American History

At the 5th anniversary, the war in Iraq remains “over there” — an abstraction for many Americans, despite the deaths of more than 4,000 Americans and hundreds of thousands, if not over one million, Iraqis. Americans have had the luxury of regarding war as something that takes place in other people’s countries.

By documenting large-scale exercises in artifice that uncannily relocate foreign wars to American landscapes, An-My Lê’s Small Wars and 29 Palms pose imaginative provocation to this illusion. Pine forests in Virginia stand in for the jungles of Vietnam. The Mojave stands in for the desert outside Baghdad or Basra or Kandahar. Lê turns her gaze on two American regions, the South and the West, perhaps the most mythologized in the nation, which themselves hold historical battlefields and spaces of conflict.

Much of Small Wars was shot in Virginia, home to Manassas, Appomattox, and more battles than any other state in the bloodiest conflict in U.S. history. The Civil War was the first major American war to be photographed and covered by the media on a large scale. It was a war that took place at home, where families combed the battlefields to recover the bodies of loved ones. Although the legacies of the Civil War remain grossly evident throughout the nation — in race relations, politics, and culture wars — only the South actively remembers it.

On the ground of the world’s “first modern war,” Virginians reenact what became known as “America’s longest war.” In an artist’s talk, Lê confirmed that these men often begin as Civil War reenactors before “moving on” to World War II and then Vietnam. Their reenactments take place on land that bears the memory of its own war, land revered as hallowed ground.

The South holds a space of memory, preservation, resistance to change. It plays the past in American mythology. And across from it stands the West, a space of invention and self-invention, the infinite possibilities of the future.

“I take SPACE to be the central fact to man born in America,” wrote the poet Charles Olson.

In 29 Palms, the grand expanse of the Mojave invokes the receding horizon of the frontier. Yet the open space of western landscapes covers the erasure of cultures. The West is epitomized by the simulacrum of Buffalo Bill’s Wild West Show, which featured real Native Americans playing Indian in simulations of Little Bighorn. At Twentynine Palms now, Marines patrol Potemkin Middle Eastern villages, firing paintball guns at costumed insurgents.

Lê’s show invites meditation on how specific landscapes activate historical imagination — our sense of how time and space move together. This is what the philosopher M.M. Bakhtin referred to as the chronotope (literally, “time-space”), naming the way we experience time and space as a single phenomenon. Dates and geographic locations can function as chronotopes, becoming repositories for collective consciousness. Places of war become chronotopes: Appomattox. Wounded Knee (twice). Vietnam. And now, Iraq.

A portrait of American space emerges from these landscapes. Public space: the nation’s negotiation of itself as a union of different regions, states, peoples. Global space: the way American identity has been formed by encounters with others, at home and abroad.

The South plays the role of memorial; the West, a future that has no memory of its collateral damage. It’s a diptych: two wars, two displaced landscapes, two national traumas no longer visible in the places they occurred.

The portrait is double because the American chronotope is double. It has governed imaginations of the Americas from visions of Egyptian civilization in the Mayan pyramids, to contact theories that turned Native Americans into the Lost Tribes of Israel, to the quest for El Dorado. Even before the Age of Discovery, the Americas stood in for other places. Once thought of as a ghostly region beyond the boundaries of humanity, the fourth quarter of the world was transformed into a paradise of gold and eternal youth. Time and space shifted according to the fantasy invoked. The hemisphere was “discovered,” after all, as Columbus’s error.

In the United States, the land and its figures have been framed in simultaneous narratives of primitivism — restoring Zion — and progress — Manifest Destiny. American time is essentially pioneer time: always setting out, always returning. America’s mythology of itself requires it to draw authority from the past and energy from the future.

In Small Wars and 29 Palms, the slippage between landscape and event enacts a divorce of time and space that only makes the chronotope more palpable. A row of Abrams tanks, dwarfed by a mountain range, looks ready to fire on the land itself (Mechanized Assault, 2003-04). Trucks roll into a mock one-horse town (Small Convoy Attack, 2003-04). The artist, playing the role of a Vietnamese interpreter, gives a lesson to a soldier in a pastoral scene that nicely reverses the image of colonial missionaries collecting words from the natives (Lesson, 1999-2002). 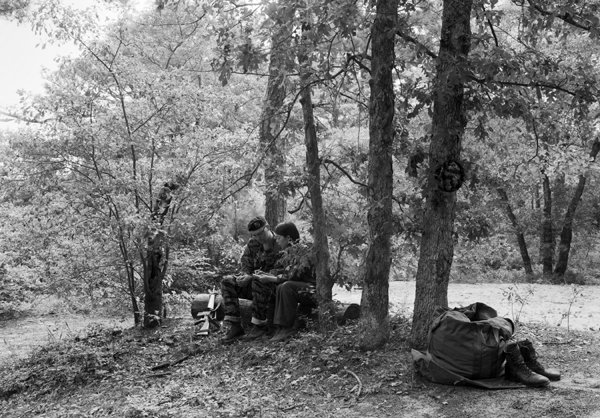 In dreams, or trauma, we can find ourselves in two places at once. In Small Wars, disoriented between commemoration and simulation, national myth and present duration, we might begin to see.An expanse of Western desert, populated by armored vehicles and crude stage sets, signifies that half of American character that resides in the future: which is about invention and innovation, but also obliteration and amnesia. Viewing Southerners fighting the Viet Cong in the forests of Virginia lends a feeling of estrangement, one which reminds us that our “home war,” the war that defined the nation, continues its violence despite (or because of) its absorption into reverie. By contrast, the Vietnam War was disowned as unwinnable and purposeless, a quagmire that furnishes the most popular analogy today for Iraq.

Nearly fifty years ago, Edmund Wilson framed Patriotic Gore, his masterpiece about Civil War lives and literature, with a critique of the Cold War. The need to spread the American way of life around the globe lives on today with “spreading liberty” in Iraq, as well as new frontiers that offer “new opportunities,” or markets. All justifications for starting wars, writes Wilson, are ideological. All justifications for war are inventions.

Eleni Stecopoulos is a poet and writer based in San Francisco. She is the author of AUTOIMMUNITY (Taxt, 2006) and has just completed a manuscript called Armies of Compassion. She earned a Ph.D in English from the University at Buffalo, where she first wrote about American time while studying Civil War literature and the Dawes Act with Americanist Neil Schmitz.