Who We Were When We Were Here 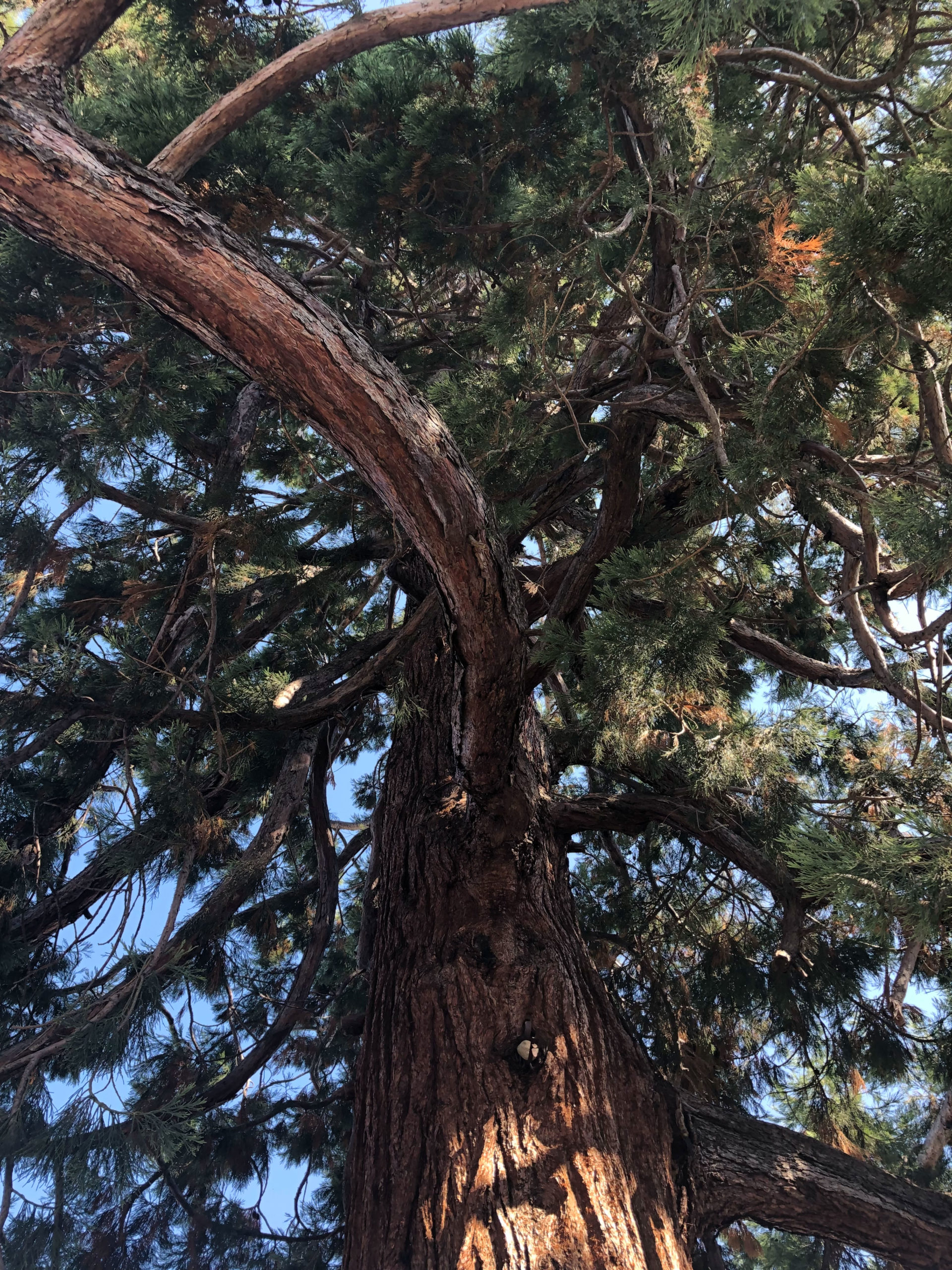 We were teaching on the reservation when, overnight, the campus closed. We were working remotely, seeing students in person only when shopping at Fred Meyer. The tribe took care of us, valuing science over the bottom-line. There were challenges for students — finding Wi-Fi in Starbucks parking lots, dealing with children, caregiving. There were losses in the community and personally, too. We flew to California to be with family, with grandma, especially, who was recovering from Covid. Coming from a sewing lineage, in which grandma and mom worked in sweatshops (and we studied apparel design), we formed a production line making masks. We stopped writing, but then brought it back through the theme and process of sewing. In Bellingham we walked the neighborhood, becoming familiar with and grateful for neighbors, dogs, children, free vegetables, deer, and rabbits. There was much more we might say, but what was the proper protocol for telling stories not our own? And how might we respect and honor the people they involve?

We were underground for a time, like a cicada or a mushroom, and then we emerged. Like many great women artists (Emily Dickinson, Hilma af Klint, and Lee Bontecou to name a few), we sprung out, bursting at the end of or after a life, posthumously, like monotropa uniflora. We wondered: Were we a fungus or a flower? We were no longer hidden. We got a divorce. Together we stayed in the house and farm until they were sold. Together we got Covid and then we got better. Afterward, apart, we moved into town. We didn’t sleep much. We were working, painting, teaching, chairing, thinking. We were alone, so we had time for reading, too. We made small groups dedicated to theory and dream-work over Zoom. We walked the one hundred-acre wood, discovering places we’d never been before. We had discovered we were capable of a lot more than we knew.

The Universe Owes Us Nothing,
but We Have to Live Some Kind of Life

At the beginning, we fell in love and fled — to Taos, Tahoe, Moab, Bend, and Lincoln City, meeting our person, making escapes. Racing up the coast, we nosed ahead of fires, landing as a friend’s house burned. On the road, we taught in parking lots and slept under the stars. Back home, we washed our bananas, led studio classes masked-face-to-masked-face, and performed Friday Night Scream Therapy on Instagram. We paused our own work, pouring something of it into our students and the community, co-crafting soundscapes and video projections around Bellingham. Our matka complained that even during World War II, when there was no food and the Gestapo took people, the schools never closed. We turned her words over to the students and added our own—the universe owes us nothing, but we have to live some kind of life.

We were driving the autumn dawn, lulling our sleepless daughter into dreams while her mother, an insomniac, slumbered in the warm of our bed dreaming, too. We circuited the neighborhood at first, going nowhere in particular. Pulled to the north and west, we moved along the water, finding our way to the reservation, to Lummi Nation. What we remember was the sound of the rain and the blue of the bay. It made a deep well, a home. While we worked here, our art travelled elsewhere, to Poland and Palestine. There was a lot to do. Exchanges with partners abroad were rich, but our technology poor — over WhatsApp our friend and collaborator, a sound artist, sent extensive, devastating reports about life in Ramallah; over Zoom we performed a solemn, public ritual in Chrzanów, the call dropping right in the middle.

Decades ago, as a teen, we read Camus’ The Plague, everything on AIDS as well as on the flu of 1918, initiating an obsession with epidemics. This prepared us — stashing water, a month’s supply of canned goods, one hundred N95s — just in case. Yet, with lockdown, preparations fell short. How could we plan for the dissolution of a cross-border relationship? The boomerang of childhood trauma? Our elderly dog going deaf? It wasn’t enough for her to be in the same room as us — needing to press up against, just as we were no longer able to touch another human. To make sense of time, we kept spreadsheets tallying Covid cases in various locales, baked bread, took long walks, and taught AIDS literature. A season later, we fell in love and returned to writing essays. A year later, we laid our beautiful dog to rest on the longest June afternoon.

The Law of the Conservation of Energy

We had returned to this place, just before the virus arrived, seeking refuge again, this time from Seattle. It was the fifth return, maybe even the last, but who knows (although building and sustaining community is more appealing now than new experiences). Often we found ourselves at Little Squalicum Beach or behind the plywood factory, remembering the many hellos and goodbyes we bid the city there. Before the pandemic, we were sick, unable to date or make art, but grew stronger living moment to moment. Out of each day we carved long walks, and from each week ocean swims. We slowly grew close to someone we had crushed on for ten years, but our nostalgia for the form this specific energy had taken before was misplaced. We returned to art projects abandoned over the past decade, recouping the energy in rethinking them and recognizing the multitude of possibilities which already exist.

With the border closed, we stayed home, our regular crossings no longer possible. It was there in Canada, too, where we had grown up Franco-Ontariens; where notre mère and frère still live; where we met our American partner at Banff; and where we spread the ashes of our youngest horticulturalist frère among the rhododendrons in Stanley Park. It was over there we were denied entry, into here, our marriage being unrecognized then. So, we were home, teaching and re-evaluating our legacy, with photos we found and took. We began to sort and separate, fold and suture, sharing the process of commemoration — Look how handsome I was! What goofy glasses. Where were we? We walked the neighborhood counting bunnies (49, 30, 24, 62). We lost our eighteen-year-old cat, gained friends among neighbors and a café owner, and began Zooming with notre mère on Sundays. Somehow in all this, things got stronger.

We had come back from a long time away living in Northern California. There, we made performance art using profane rituals exploring apocalyptic themes. Our mothers, practitioners of the sacred arts, were rooted here, where we were raised, and growing older. We longed to join them and a larger community, but found in the latter the insidious affliction of a general liberal malaise. We turned to activism — to defund the police, to provide aid to the houseless occupation camp at city hall, and to stop sweeps of the same camp, where police in militarized gear, rooftop snipers, and officers from five different law enforcement agencies violently kicked people out. We adopted the space of the street as theater, donning the clownish persona of the do-absolutely-fucking-nothing mayor, “listening to” every request and need. None of this is over and we have not given up, a profane optimism fueling us forward.

Distance is far. Traversed so easily before, two or more times a year we’d fly 16,000 kilometers to our homeland under proximity’s illusion, but with lockdown we had to reckon with distance’s true reach. Years before, we chose to leave from where we had come, just like our mother, who migrated there (Deutschland) from here (US) before we were born. We had, in a sense, returned to the motherland, yet with a firm anchorage back home. Raising a child without family cut the hardest, but the sad narrative of being away transformed as our relationship to this place deepened. Slow to see its beauty, it took four years to realize we lived on the sea, to fall in love with an apple tree moving through seasons. From this sanctuary we cocooned, exchanged frequent, lengthy voicemails with our best friend in Berlin, and wrote from the depths of our body, claiming the darkness of this time without shame.

We were sick already, the house we grew up in having poisoned us with mold. Half fixed when lockdown began, it stood vacant in upstate New York for months. By then we had stopped making work. What was the point? We thought we were dying. We walked the city for air and to spy. Who was alive? What was changing? We started meditating. Slowly we got better. A neighbor gave us a kitten. We took it with us, driving cross-country last summer to renovate the house in New York. By autumn, we found the hallway expanded — into parallelograms of golden-white; no longer pure architecture, but a light structure; not a dark Reaganomics shelter 어머니 built, but a jewel-box. After listing, there was an offer within days. Then came a call from the adoption agency. There was a match. On Christmas night our miracle was born.

With thanks to Cynthia Camlin, Elizabeth Colen, Yanara Friedland, Brel Froebe, Pierre Gour, Casandra Lopez, Sasha Petrenko, Peter Rand, and Robert Yerachmiel Sniderman for the pandemic stories that informed these portraits of artists and writers in Bellingham, Washington, also known as the sacred ancestral and perpetual home of the Lummi people. Deepest gratitude to Bean Gilsdorf and Claudia La Rocco for the invitation and support of this piece.