The Approach to Writing for Youth: Some Questions We Have

Children in any environment are entrusted with responding honestly. Any issues and tragedies are manufactured by adults.

We sit and watch films around youth and wonder how easily some of the language happens, why it feels real. Youth generally just bring that to an environment. They show up as themselves, lending their whole selves to a role maybe more than adults do. What strikes us and makes us particularly mesmerized is their genuine delivery. 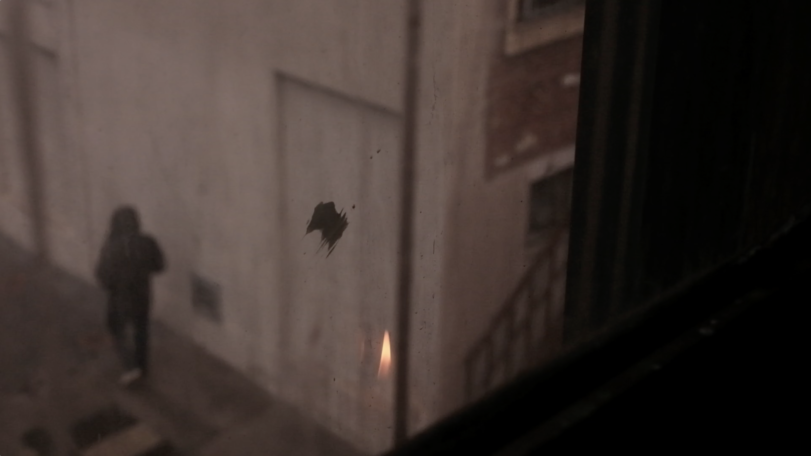 Written and Directed by an+ev 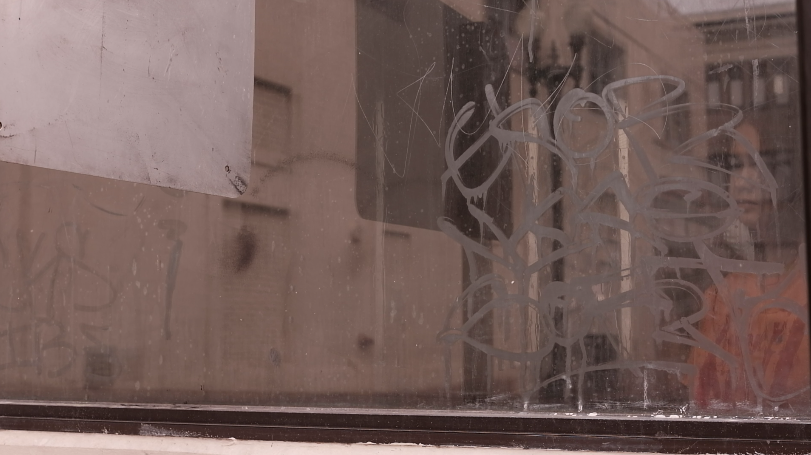 A teenage girl preps an elevator for her performance piece and digital letter to her friend quarantined in Brazil.

The writing process with children has to be more circumstantial, not fixed as a script. In the same way you approach writing a script for a documentary by first transcribing your research and crafting the rest around it, you have to be open in writing for youth in such a way that you truly listen; it’s innately demanding.

Our engagement with youth has looked this way outside of scripts, it’s shaped the best way we think to write characters: delicate. 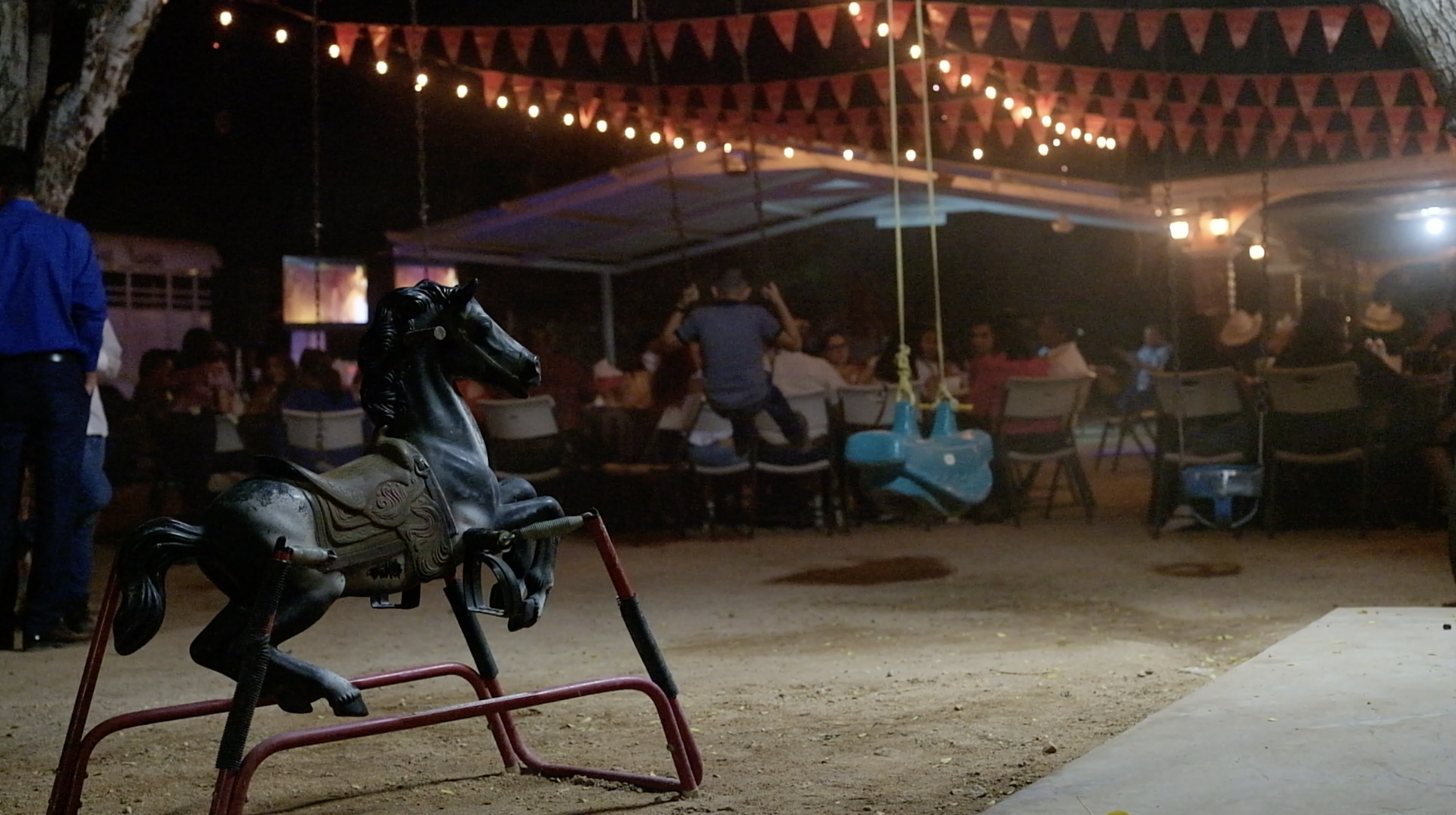 A straight shot of a boy swinging as the family eats in celebration of Prieto’s 15th Birthday. 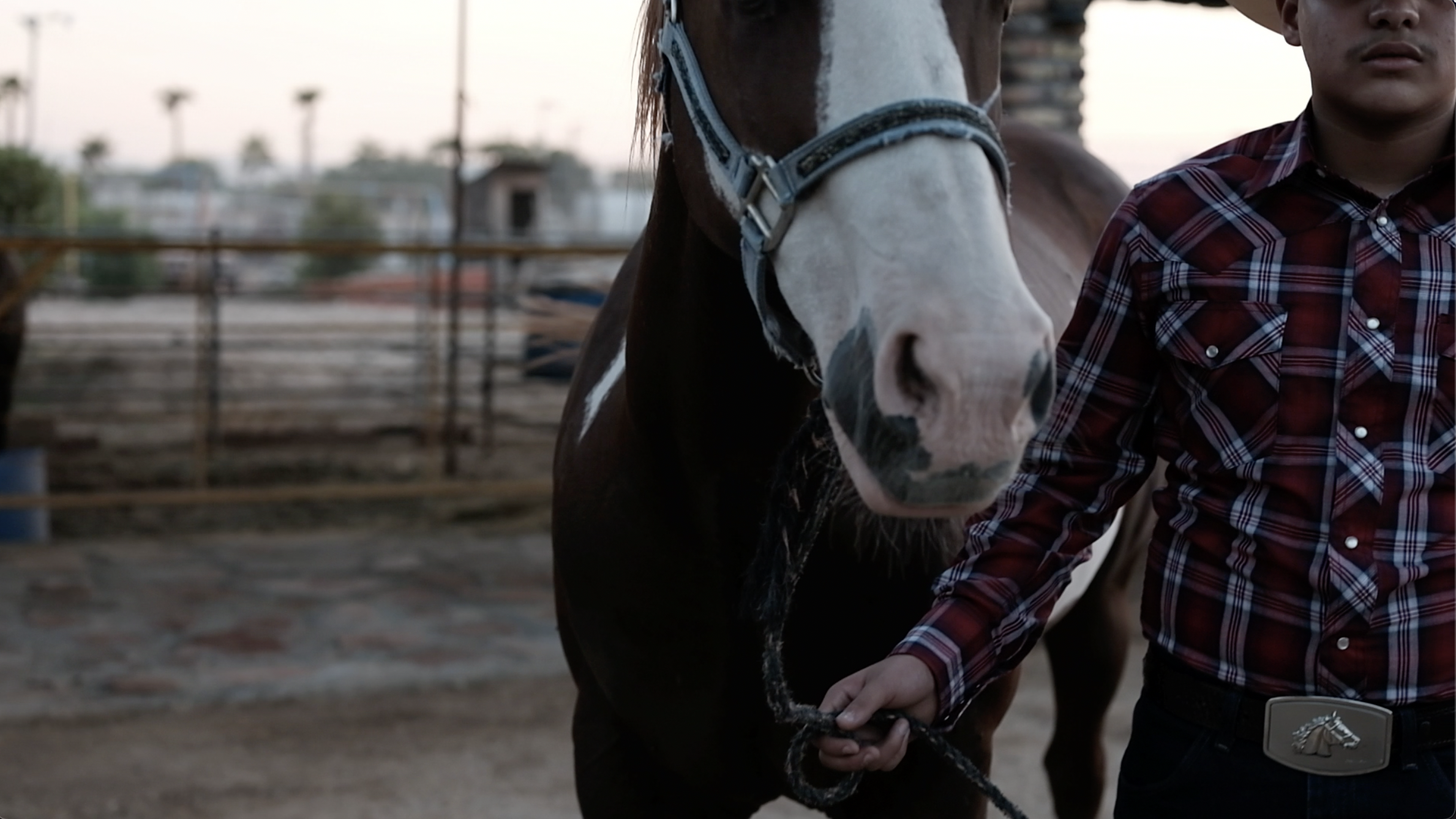 We often watch interviews and often our questions are not answered. We listen to the casting process and the development of characters but care about what really happened. How personable or intimate are these roles? How does a director feel moving on to the next project? How do they relate to the geographies if they aren’t from there? Is there an approach in casting and filmmaking considering the longevity of peoples’ lives in and outside of an acting career? As we move deeper into character development in our own work these questions feel important to answer. We do not answer them here though.

What we know is that being with youth has always required 100% of our attentiveness, so much so that the world becomes muted and time feels irrelevant.

We wonder how many directors have the same questions when a film feels so honest. We want to know more about how time is spent, if writers/directors are reading what kids write, looking at what they make, play, talk about, listen to. A kid’s perspective is almost too bold for us to make up.

How much of the worlds being built for the characters are voyeuristic or suffocatingly nostalgic, idealized versions of our own childhood? To what extent are youth taken into mind, both those performing and those watching?

As (adult) screenwriters, what are we projecting onto youth in film? What are our own ethical terms we set not just in the directing process but also the writing one?

Although we pull from the experiences of our own childhood, we are not writing for children in order to resolve anything in ourselves; we want more autonomy for them than that. We feel challenged by the direction taken in writing a film, whether it be a documentary or a fictional narrative, because of the truth we want to achieve. We want to challenge the craving for completing an archetype or the fed conclusion we are accustomed to, demanding also some engagement, some of that undivided attention.

The stills shared are narratives that play with boundaries that feel real. This feeling lies in the framing of a shot, the color, length or where both the foreground and background have their own stories.

What’s the point of an invented story if it’s not trying to tell the truth somehow? 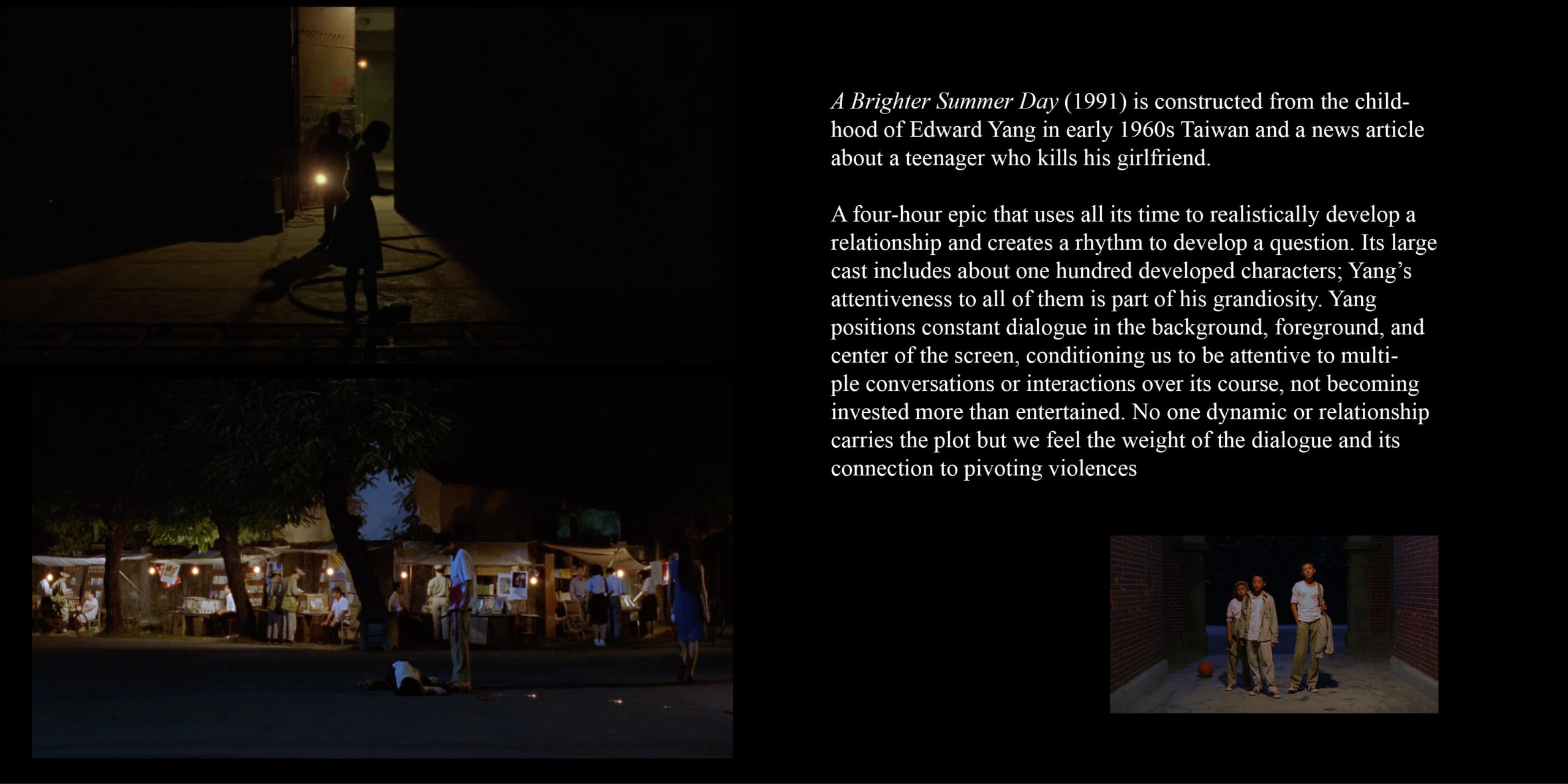 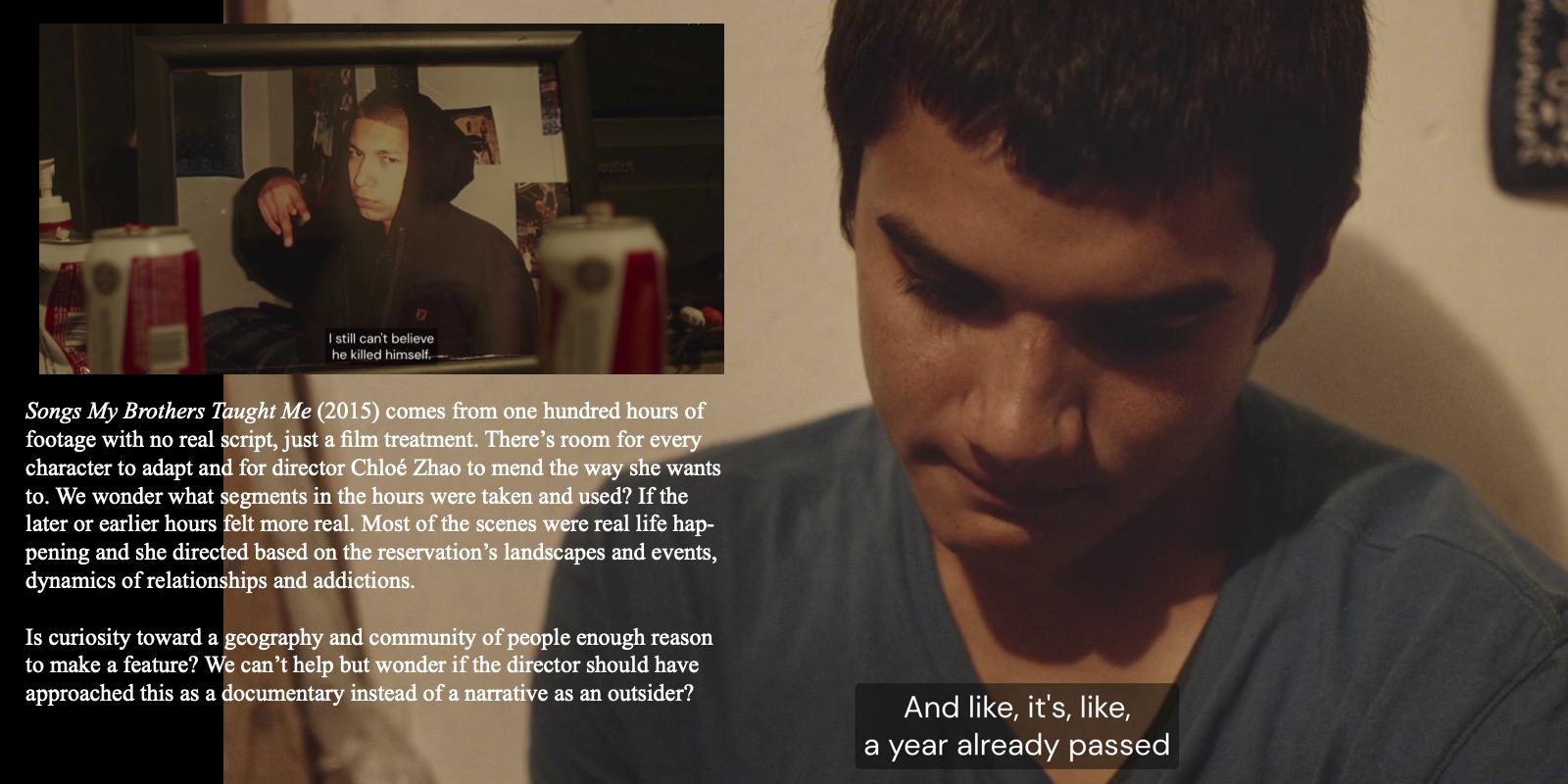 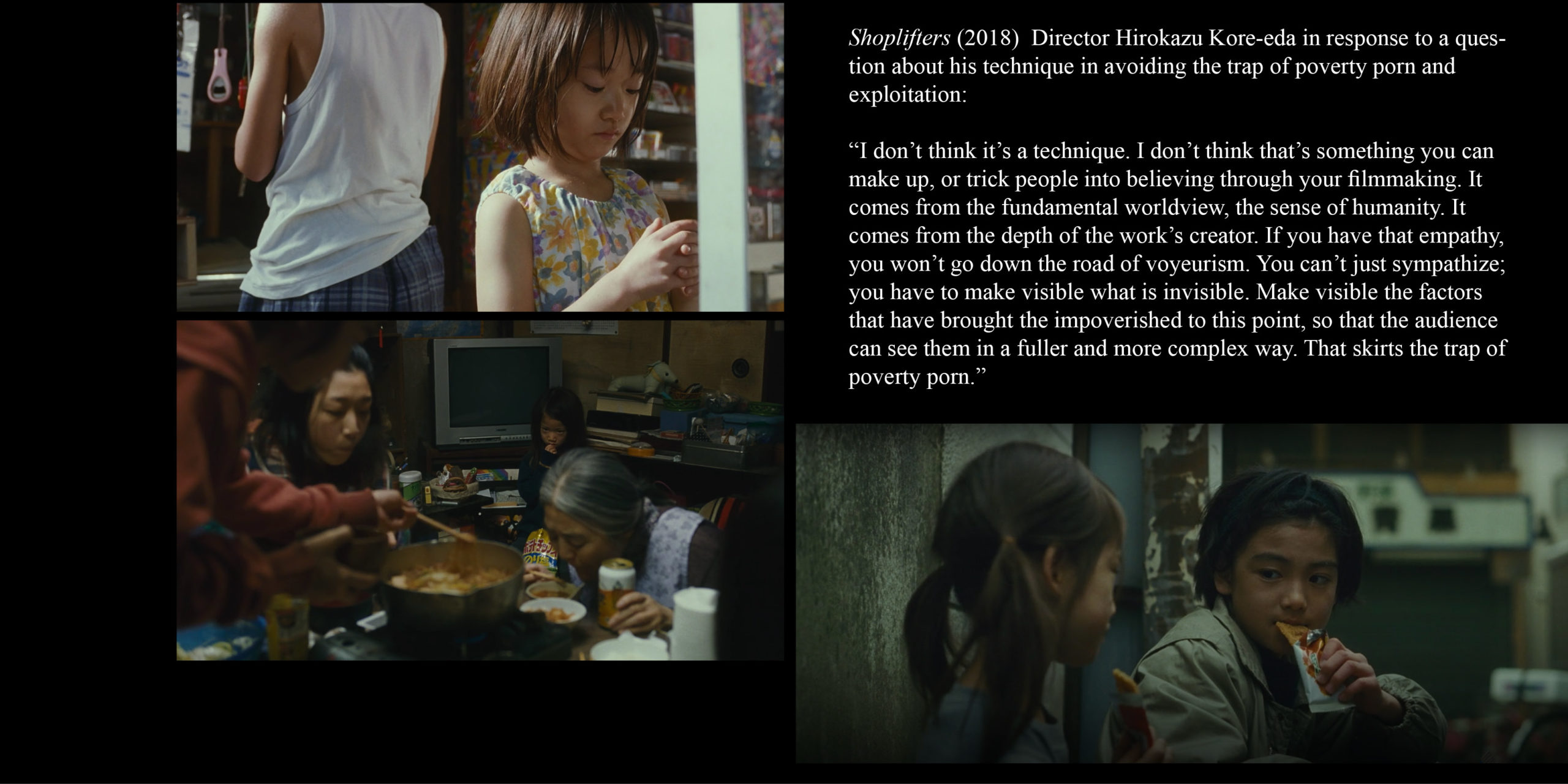 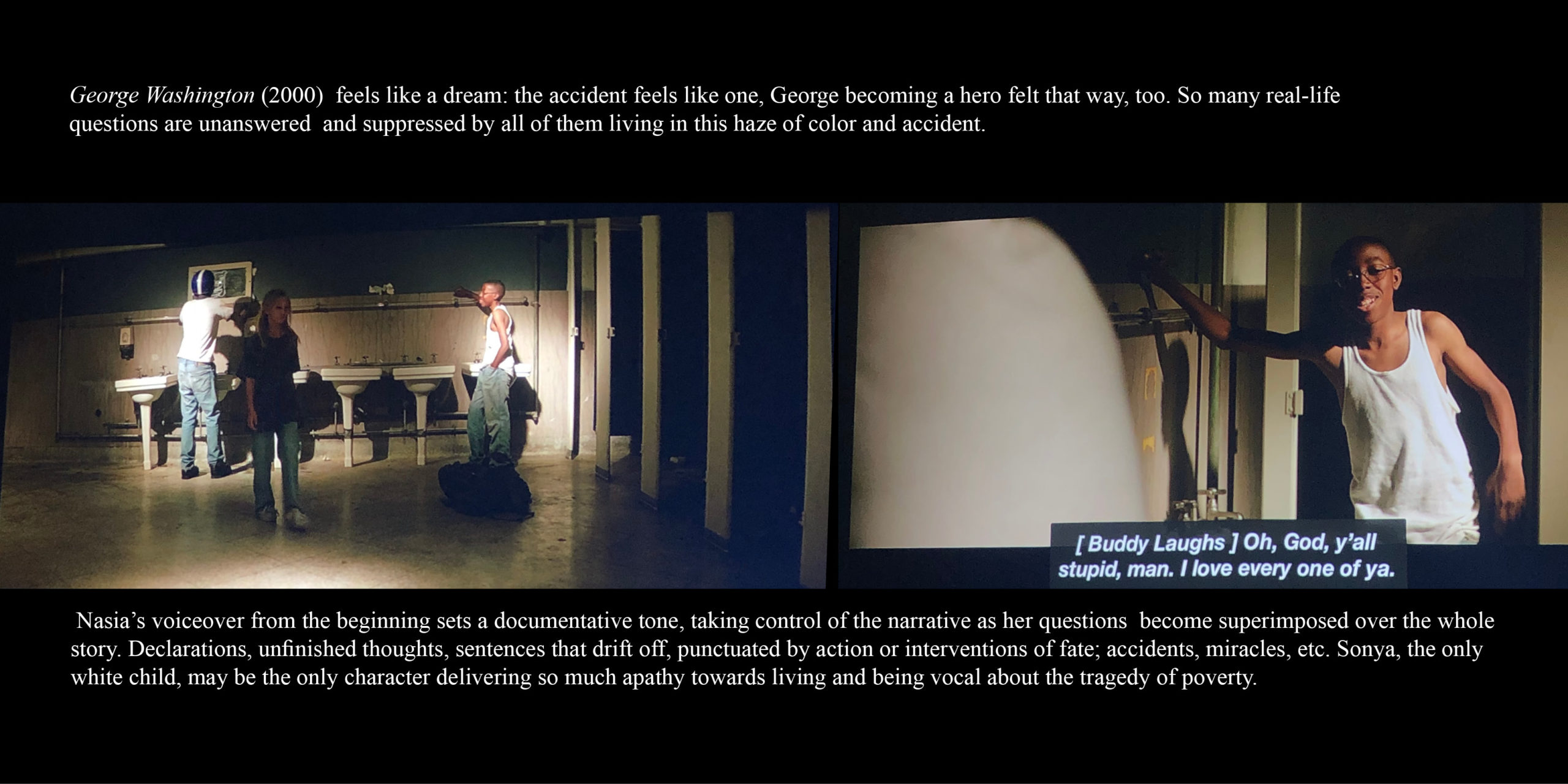 We do feel connected to our youth when we see them on screen, therefore we want the characters we write to feel pleasurable to watch.

We find ourselves attached to characters and thinking of other things they would say or do outside of the film. We are reminded of them in circumstances.

There’s always a want to know where young actors are at or if they will ever do a film again. We wonder how much communication is kept with them post-film. Wonder what parts their families were involved in. Wonder if they ever felt uncomfortable or if they feel the same attachment to their roles.