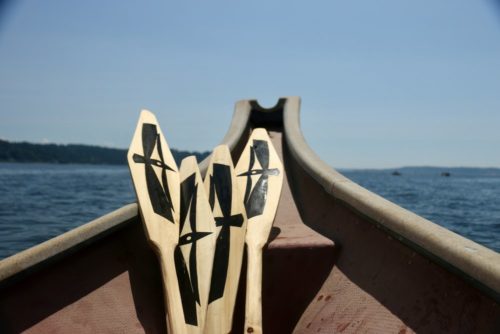 On that Monday, Indigenous Peoples’ Day 2044, canoes launched all day, hundreds of them. Aquatic Park was one launch point. Chrissy Field was another. Add in Candlestick Point, Sausalito, Berkeley, Alameda, San Mateo, Benicia, and pretty much every boat launch in between. Canoe families traveled across the country from as far away as Shinnecock and Seminole. And they traveled from around the world too, from Aotearoa, Tonga, Fiji, Japan, Taiwan, and a whole lot more. My dad had been running canoe camps all around the Bay for years, mostly for Indigenous kids, and also for other kids who cared about the water but didn’t have access to it. Many of them had formed their own Canoe Families, and they were there in force, helping visitors who were new to the Bay understand, appreciate, and respect its powerful tides, currents, and winds.

The water was thick with every kind of vessel you can imagine. Sailboats and motorboats, kayaks and cabin cruisers all came to bear witness and show support. The boats cleared a path so canoes could navigate around the island safely. Circling the island has become a thing, more popular among tourists than taking the ferry and walking into cells. And for locals with access to just about any kind of watercraft, it is easily the most popular day trip. 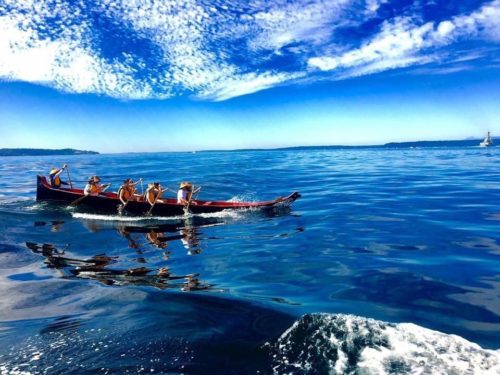 See, what had happened was, back in 2024, when Secretary Haaland returned to D.C. after attending Sunrise Ceremony on Alcatraz, she made a few changes out on the island.

When the original Occupiers issued their proclamation in November of 1969, it included these words from Richard Oakes, “Further, it would be fitting and symbolic that ships from all over the world, entering the Golden Gate, would first see Indian land, and thus be reminded of the true history of this nation. This tiny island would be a symbol of the great lands once ruled by free and noble Indians.”

I think Auntie Deb understood what Uncle Richard was getting at. 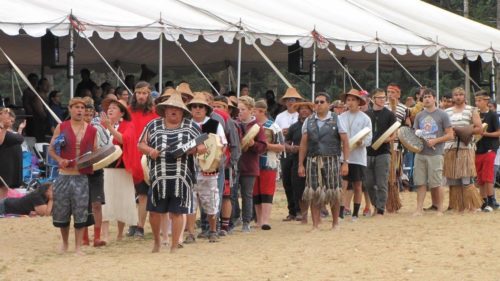 2024 was pretty much the apex of the climate crisis. Tech titans from every corner of the globe were investing in technologies and processes to reverse global warming. Sprawling tent camps of climate refugees steamed in crazy high heat that didn’t break for weeks. There were no more salmon below the 48th parallel, and water was rationed from May to September. When waterfront properties filled up with rising tides, even the rich turned into climate activists. It was a time when the nation needed a reminder of its underlying power, beauty, and resilience. It needed to remember the values, cultures, and lifeways of its first people. It needed to find its heartbeat. 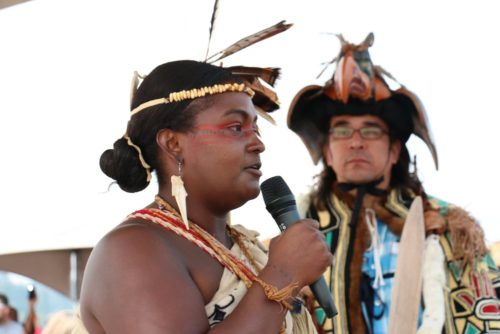 And so, Secretary Haaland created a cultural center on the island. This was exactly what the Occupiers asked for in 1969, shortly after the original San Francisco Indian Center burned to the ground way back when. She also allowed much of the island’s perimeter to be used as a sculpture garden — one of the world’s most iconic contemporary art installations. Indigenous artists created monumental works. Non-Indigenous artists contributed pieces paying tribute to Indigenous cultures. Some of the sculptures moved and turned like living beings. Some played visual tennis with San Francisco’s skyscrapers, and some created windows into the possibilities that open out to us like the waters beyond the Gate. The island became a beacon for a continent on the mend, and that mended continent became a beacon for the world.

Now, when I climb the hill for Sunrise Ceremony, there is a chill in the air that warms me all the way through. I get that certain feeling, the same one I felt when Ruth Orta launched us out onto the water way back in 2019.