'AMERICA' The Beautiful: An Open Letter To Glenn Ligon 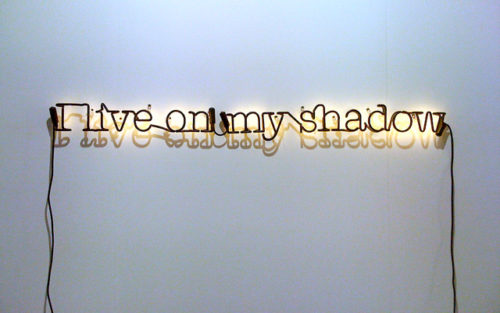 I’d like to begin this letter with an apology.

For years I’ve included your work in my personal pantheon. Since my first encounter with your text-based paintings in the pages of Artforum during your early days at the Whitney Museum, to your critiques of Mapplethorpe, to your contributions to the San Francisco Museum of Modern Art, I have always found your work intriguing, inspiring, and — at times — exasperating. In short, you’ve never failed to impress me. Even more so when I consider your very vocal status as a gay black man in the high-end art world and as a gay black artist in the world at large. Still, I owe you this apology because, though I’ve held you in high esteem, I have underestimated you.

AMERICA, the catalog for your 20-year retrospective show held at the Whitney this year, has given me the opportunity to study the  breadth and depth of your body of work. Being able sit with this sturdy black book, this 300-page piece of art in itself has — frankly — put me through some changes, brother.

Scott Rothkopf’s introductory essay talks about your early days as an Abstract Expressionist seeking your voice and how you found “that there was too much of a gap between what I wanted to say and the means I had to say it.” This reminded me of the line, “I’m simply without the means to conduct my own prism” from Will Alexander’s poetry collection Compression and Purity — which is what inspired me to write you this letter instead of some critique or some such. If you haven’t yet, you should read Alexander’s book. You’d like it.

Pulling inspiration from sources like Basquiat, David Hammons, Adrian Piper, Jasper Johns, and Martin Puryear, you began to make literary-based pieces where text is the primary — but not the only — means of communicating your newfound voice. And this, I confess, is where I got all messed up.

Take your dream-book series. As a viewer of painted text, I took it as a given that everyone knew what a dream-book was. That everyone knew what those three stenciled numbers in the middle of each piece meant. I thought everyone knew that you were preserving a magical artifact, and lucky magic at that. Only you knew better. You knew that everyone did not know dream-books, or magic numbers — and where better to preserve this occult knowledge than in a museum of modern art? You understand curatorial expression, that how and where you say it is just as important as the saying itself. You have created literary-based multimedia narratives. I didn’t see this until AMERICA, and for this, I apologize.

I also apologize for what I can say, in hindsight, was a once-over of many of my favorite text pieces. In my defense, I didn’t get the opportunity to study your work in such great detail as the lush and plentiful plates in AMERICA have allowed me. Perhaps if I had, I wouldn’t be feeling so bad right now. I was so taken by the passages you chose from Zora Neale Hurston, Ralph Ellison, James Baldwin, and that I seemingly glossed over the statements the paintings themselves were making.

Glenn Ligon, Untitled, “I’m Turning Into a Specter before Your Very Eyes and I’m Going to Haunt You” 1992, Philadelphia Museum of Art

In one of my favorites, the words, “I’m Turning Into A Specter Before Your Very Eyes and I’m Going to Haunt You,” are painted in bold black stencil that starts at the very top of a large white canvas. And as the phrase repeats again and again, the letters begin to merge and darken, so by the bottom of the piece the letters are so thick, smeared, and obscured that all that remains is the intent of words, the feeling behind them. The effect is eerie and liberating at the same time. Okwui Enwezor’s essay “Text, Subtext, Intertext: Painting Language and Signifying in the Work of Glenn Ligon” shed much light on that.

I guess because of your dry wit and wry observations, I have not given you your “teeth.” Your take on runaway slave posters, placing yourself as described by friends and associates as the runaway, or your tribute to Henry “Box” Brown, the man who mailed himself to freedom, have intrigued me. But it was in the interview with Thelma Golden, where you mention that quoting Richard Pryor was scary, that I found my missing piece. There is something in the way that I laugh when I listen to Pryor that is relieving. His every punch line is like a daredevil outrunning the hell-hounds once again. You’re right, Pryor is scary.

For your part as the impetus to the “post-black” movement, for your haunting texts and textures, for deciding that AMERICA is the best theme for your retrospective — you scare me. I wrote this to say you scare me, Glenn Ligon. And I like it.