On the fifth anniversary, 2024, things were already starting to change. Dad and I still went to Sunrise Ceremony. He was still coffee; I was still hot chocolate. He carried the drum, and I took the blanket. But the chill in the air was different. It didn’t make me cold inside and out, the way it used to.

Dawn again, and another strong wind blowing off the water. But all those souls? The souls of the prisoners? I don’t think they were trapped on the island anymore. I think they passed through the Golden Gate and into the beyond right after the first Alcatraz Canoe Journey. 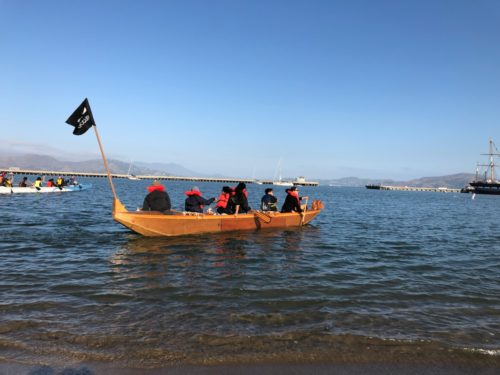 The story I heard goes something like this: A bunch of the skippers and their crews — Canoe people who came from all up and down the Coast to celebrate the fiftieth anniversary of the Occupation — took the ferry out to the island the day after the first journey. Uncle Eloy made that happen the same way he made a whole lot of other things happen so that Alcatraz wasn’t just a prison turned into a museum, so its place in the history of Indigenous rights didn’t get erased. The skippers and their crews brought songs, drums, wisdom, and spirit. They sang inside the prison, in the halls where Hopi men were shackled because they wouldn’t give up their children to the boarding schools. They sang the cages open and the souls free. That’s how the story goes, and I believe it. Because every year since then, when we head over to the island on Indigenous People’s Day and un-Thanksgiving, it isn’t cold. Not like it used to be. 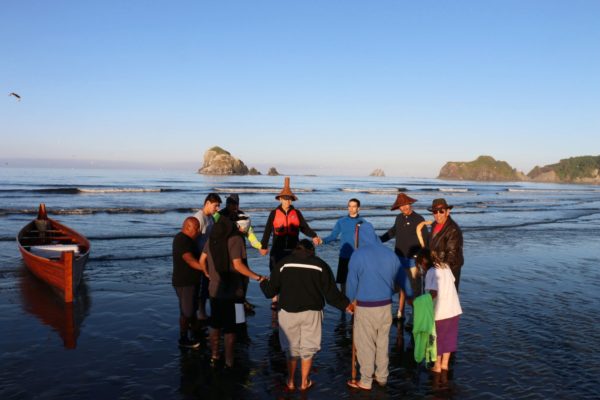 A prayer to the creator and the ancestors for a safe journey to distant villages. Photo: Julian Brave NoiseCat.

I had a special job on that fifth anniversary. I escorted Madame Secretary Deb Haaland from the wharf in San Francisco, across the water on the ferry, and up the big hill to the Sunrise Ceremony on the island. There was a fierce competition among us kids from the community for this honor. I had to write an essay for the qualifying round and give a speech in the finals. I prayed and practiced, practiced and prayed. I didn’t think it was going to be me, but it was.

When I met Secretary Haaland on the dock, she was wearing a red ribbon skirt and so was I. I guess we were both thinking about honoring Missing and Murdered Indigenous Women that morning. I figured we had a few things in common.

It seemed like a lot of people had heard Secretary Haaland was coming for the Sunrise Ceremony. I’m pretty sure I saw Colin Kaepernick on the edges of the crowd. And Dad told me over breakfast burritos later that morning that Jane Fonda was there, too. 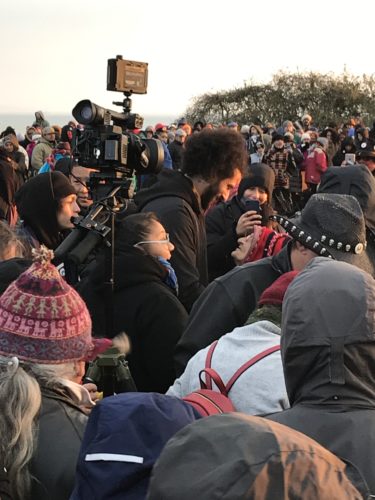 Secretary Haaland chose to walk up the hill even though they offered her one of the golf carts. I thought that was pretty cool — especially since walking up that stony road in moccasins kind of hurts. I know. I’ve done it many times.

Every Sunrise Ceremony is powerful, but I think that one was especially so. Seems like Secretary Haaland felt it, too. On the way back to San Francisco, she told me to call her Auntie Deb. I have loads of aunties, but she is my first Laguna auntie, which is pretty cool. A pair of seals swam alongside the ferry, like they were playing with us. I think we both took it as a good sign.

And then, when Auntie Deb got back to Washington, D.C., she made some changes, which she could do since she was Head of the Department of the Interior, and that’s the part of the US government that is in charge of Alcatraz. 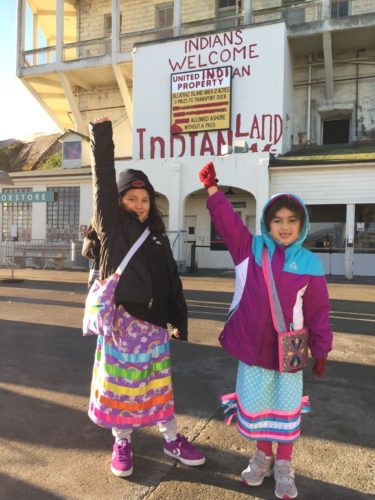