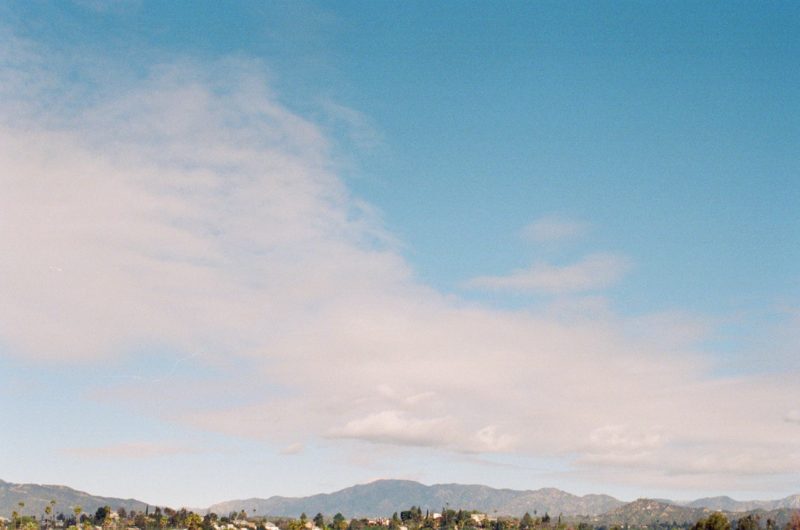 I’m homesick, so I’m listening to Morrissey and reading City of Quartz.

I’m homesick, so I’m smoking a blunt, lying in the sun that cuts across the Zapotec rug X gave me when he saw the state of the carpet in the rotting apartment/ex-punk house I now call home, naked, listening to Art Laboe’s Dedicated To You, Volume 1.

I’m homesick, so I’m trying to write a sensory memoir here, homies. You feel me?

I’m homesick, so I have nightmares. I walk into my tía Linda’s room — in this dream, it’s dark, cramped, shallow. She’s in bed, a silk bonnet covering her curls, the television is on. She’s talking to my tía Mary on the phone. I look at the television screen and see what looks like a massive hole cut into the ground, like a copper mine. Two figures in hazmat suits march into the frame, holding a naked corpse by the wrists and ankles. The camera zooms into the face, then a name appears on the screen, followed by a voiceover reading of the name. The hazmatted figures throw the corpse into what I have now realized is a mass grave. My aunt says into the phone, oh, so-and-so is dead. So many people are dying, that they have resorted to a twenty-four-hour parade of the dead on television. That’s the only way you’ll know if your loved one, your friend has died.

Two days later in The New York Times, I read:

In the Los Angeles area, in the parking lot outside the Community Hospital of Huntington Park, Mr. Estrada has watched as more than a dozen bodies have been brought to an unmarked white refrigerated container, the makeshift morgue.

“Basically you’re waiting to see your family member come out in a bag,” he said

I’m homesick, so I FaceTime my sister. She shows me all her new meds, her nebulizer. Familiar steroids. She pauses every other word to catch her breath. I think back to when she used to line her lips and I had a bowl cut. There was Pasadena you and me, I think, and there was Huntington Park you and me. There was you carrying me on your back down Orange Grove at midnight to Huntington Hospital, as I struggled to breathe. There was you and me on Tweedy on New Year’s Eve, stolen shopping cart and stolen snacks, yelling and laughing as we waited on the traffic island for Mary and her boyfriend, you in that rabbit fur coat you got working at the Penney’s on Pacific. You and me, I think, back when the world floated above my eyelids, the word “fuck” in the color and shape of Rave hairspray and the bleached patio of a skater drugdealer. You and me, against abusive boyfriends, roaches, collapsed ceilings, shot up picture windows, and stuck up people from Downey — the world — armed only with Noxzema, Corduroy, some SweetTarts, a $20 bill reeking of marijuana, and The Cure’s Standing on a Beach on cassette.

Please, my older sister Veronica says with great difficulty, do not get this.

I’m homesick, so I’m thinking about how Latinx people are more likely to commit suicide the more assimilated they become and the farther away from where they come up they end up. I miss my family; and yet I never pick up their phone calls. Tatiana, contesta, one aunt goes. Quiero preguntarte por tu mama, tu hermana, tus sobrinos. She’s going to read this and be angry. Contestame, Tatiana, por dios. This aunt spends six weeks in Chapala, then gets homesick. She spends six weeks in West Covina, then gets homesick. My cousin waits for her patiently at the Plaza del Sol bus terminal on Soto.

My grandfather told me he fell in love with my grandmother because she used the voseo; and he used to cry whenever he ate an alfajor. This all started after he began taking LSD and going cumbia dancing. Instead of taking LSD, I fell in love with a person just as traumatized by gentrification as me. The closest I have ever felt to home in San Francisco — I have glimmers of it, by the way, like at dusk yesterday on Capp between 16th and 15th — was making out in the back of the Castro Theater, openly being the homeboy beautiful maricón that I have always been, in the dark. I cry when I eat Hot Cheetos.

I’m homesick so I’m walking down 24th Street. The darkness, murals, painted nail salon windows, and dude from Hidalgo selling pulque out of his van feel like an alternate dimension version of Highland Park. For years I refused to go back — I closed my eyes on the Gold Line, didn’t visit family, blocked people who moved there. Then I gave up. The last time I saw a friend who moved from San Francisco to Highland Park, he played me a song he’d just finished mastering, a song about Panadería La Victoria, about the vanishing of the Mission of nuestrxs hearts and dreams as we drove down 24th. I told him how the ficus trees, how they’re destroying the sidewalk, remind me of Figueroa Street. The song feels like something my tía Soraya would trapear the floor to, the smell of Fabuloso, her silhouette, and her loneliness and longing wringing my heart through a metal screen door. It feels like the perfect orange juice can curls of a pachuca, a pair of burgundy viscose bells crossing Mission, their cuffs hitting the winos carrying them across. We listened in silence, down Mission, down 24th, up 20th, down Guerrero, down 16th, back to my apartment. Then we said goodbye.

When I was seventeen, my mother and I were evicted from our home. It was one that she and her former partner, a white photographer well known for documenting a since destroyed Mexican-American community called Chávez Ravine, had lived in for a while; when I moved in, at the age of nine, there were bees living undisturbed in the chimney. En esta casa, she told me sternly, respetamos a las abejas. In the hours before the sheriff locked us out, I had spent the morning obsessively photographing details of the house that I was terrified of forgetting. The stained linoleum tiles under the refrigerator. The vent above the bathtub. The shadows of the banana trees through the blinds. The floors, the light fixtures, the banana trees themselves. The kitchen curtains.

My favorite Chávez Ravine photographs were not taken by Don. They’re of Aurora Vargas being forcibly removed from her family’s home at 1771 Malvina Avenue, struggling against cops carrying her down the front stairs by her ankles and wrists. At the bottom, Aurora looks ready to break from their grasp and run back into her home. They’re my favorite because I know exactly how she felt.

Last week, Justin asked me at the café: have you heard this? Then pressed play.

The phrase we keep repeating:/ “that place is / that space is gone.” It’s the same song my friend played for me that night before he moved.

If you’re someone who was born and raised in the Mission, was gentrified out, and now live in Highland Park: let’s switch places sometime.

I’m homesick so I daydream. I don’t know why all of this makes sense in LA and not in San Francisco. We can move back to Huntington Park, around the corner from Titi and Ari. You can have your studio and I can open up a bilingual bookstore and listen to the kids when they call me a gentrifier; or more accurately, a gentefier. I’ll become a Guadalupana and start a punk band with Carla, take my mom out to lunch at El Gallo Giro on Saturdays and go over to my tía Linda’s on Sundays. You’ll come with me and watch the Dodgers with us on the patio. She can give me some cuttings of my grandma’s roses and we’ll plant them. I’ll make Barraza drive — Huntington to Soto, through El Sereno and Boyle Heights and past the Sears, et cetera — to come visit us. Just like Geronima and Leonor before me, I’ll grow corn in the front yard. We can go out to Part Time Punks at La Cita and stay up late and dance, then get tacos by la llantera. We’ll go hiking in Debs Park the next morning and bring Shabina oranges from our tree and in the afternoon I’ll bleach my bangs again.

I’m homesick and it’s fucking hot. The kind of weather perfect for burning my nalgas on the fake red leather of my nina’s Coup de Ville; perfect for a crime wave, for a wedge of lime, for being delusional and thinking soaking a San Marcos blanket in water and hanging it over the window is going to keep the house cool. The cerulean synthetic quilted mattress, glossy and embroidered, bare underneath us and lubricious with our sweat. The room is bright from the trio of tungsten lights, the ceiling throbbing with trails and asbestos glitter. We can hear prime time television — in Spanish, English, and Korean — and their frequencies in the next room, across the side yard, next door, the house across the patio. Helicopters. Rancheras on one side, Power 106 on another. A Dodger game — Vin Scully is still on the air — floating above like an ice cream truck lullaby. The 110, an ocean just beyond the block. Dogs barking. The noise seems to make the heat more urgent. If we were to step outside, bright halogen stars, silhouettes of palm trees and telephone lines, pulses of headlights from passing cars would cut across us, leaving behind fleeting nuclear shadows of rose bushes and wrought iron gates. But no, we’re on the bed. The fan is gasping — tán, tán, tán, ayyyyyyy, tán, tán, tán, ayyyyyyy — and the radio is on, the Art Laboe Connection whipping around us, slow jams pulsing in the hot air. Have we eaten? Probably not. Qué calor — I pull my hair up and chonies on and walk to the freezer for a half-eaten paleta. I get back and you’re already rolling a blunt. Fuck, it’s hot. Do we want to go out? Yes. Pues, OK, then let’s go.