Series Lucid Dreams of the Apocalypse
Lucid Dreams of the Apocalypse
Edited by Sarah Cargill
How might an intimate relationship to sound, frequency, and vibration inform how we participate in shaping collective change? Centering improvisatory experimentation, creative intimacy, process, memory, and Black temporalities, three Bay Area sound artists investigate sonic interaction as an embodied liberation practice for co-creating new realities. Performing artist and cultural worker Sarah Cargill is joined by composer and scholar Amadeus Julian Regucera, and installation artist and sound engineer Leviathe (Lien Do): a deconstructed ensemble, reimagining the possibilities of ensemble-based instrumental performance. The series culminates Friday, March 19 at 6 p.m. in a special broadcast on SFMOMA’s YouTube channel, followed by a live Q&A with the artist, sponsored by the San Francisco Arts Commission and presented in collaboration with SFMOMA’s Public Engagement department. 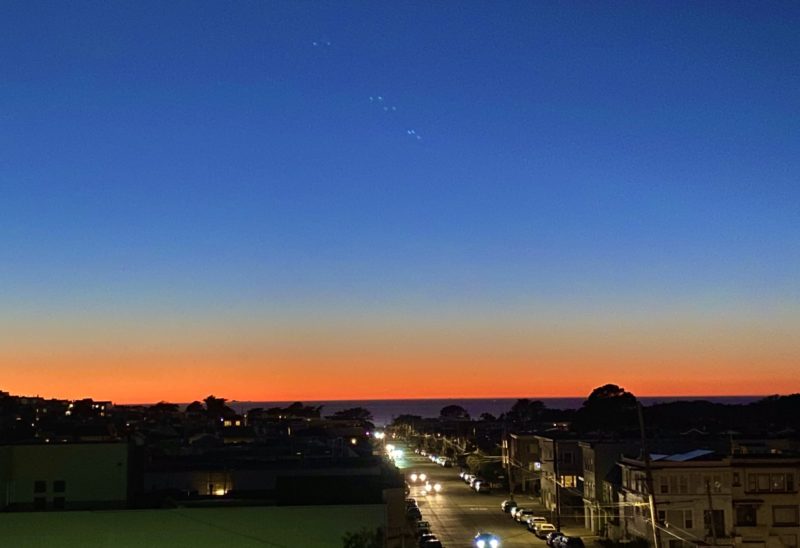 I live on the fourth floor of a tall apartment building in San Francisco. From my bedroom, I meet the gaze of crows perched along phone wires, gossiping with one another from opposite ends of the block. On warmer afternoons, I keep my windows open during my practice sessions to listen for neighboring sparrows, eavesdropping on the boisterous treehouse chatter that jangles across the street.

Early in the pandemic, amid the stilled hush of suspended lives and frightening uncertainty, I noticed a subtly remixed birdsong twinkling from one of the bushes lining the perimeter of the building. At the time, I had trouble identifying the source of the change — shifting rhythms? a new starting note? — but it nonetheless worked to sharpen the quality of my attention, bringing awareness to this moment of deep collective change.

A few months later, I came across a number of magazine and news articles revealing that San Francisco’s white-crowned sparrow population had, in fact, changed its tune. The mass halt in day-to-day human activity yielded a significant decrease in noise pollution, resulting in songs dropping to an alto range better suited for our feathered friend. Researchers had previously witnessed a slow increase in pitch from 1969-2005, coinciding with the rise in urban population and industrialized landscapes. Forced to sing out of range for fifty years. I found common ground in this struggle to be heard, and regretful for the ways in which I unknowingly contributed to their strain. In an attempt to extend sonic aftercare, I now keep my window open to send honied, mid-range harmonies to my neighbors. Free-floating lozenges to deliver us through this extended key modulation.

Lucid Dreams of the Apocalypse is, at its core, an ongoing investigation of how we calibrate and cultivate a meaningful relationship to change through the medium of sound. The project was originally envisioned as a series of skill shares culminating in a group performance among sound artists from a range of musical disciplines (live performance, sound engineering, composition, etc.). Most of the guiding inquiries and prompts that I posed to the group were funneled through a filter of practicality, safety planning and survival. Specialized “survival skills” and areas of expertise unique to musicians became a central focus as we evaluated the interpersonal, communal, spiritual, and biological functions of performance and music-making. I anchored myself in questions like:

A couple of months into the project, the global COVID-19 pandemic tightened its grip with devastating speed, prompting us to alchemize apocalypse in real time. Unable to physically gather for rehearsals or workshops — let alone plan for a live performance — we reassessed our priorities. From this improvisatory place, we made adjustments to both our direction and form, reconvening across physical distance and internet lag time as a deconstructed ensemble. Through these limitations, we uncovered surprising openings for creative spaciousness. Our challenges encouraged improvisation and created the necessary conditions through which to prioritize process and cultivate relational intimacy, all of which, I believe, are critical scaffolds to our collective transformation and survival at this time.

For the purposes of this project, I define music as a category of sonic technology that maps, measures, and alerts us to environmental and relational change. Within the pedagogical tradition of Western European Classical Music, I was taught to cultivate a relationship with my instrument through a framework of ownership and mastery. Mastery over my instrument was relentlessly tested, measured, and demonstrated by the extent to which I could obfuscate the structural inconsistencies of this human-made tool in my own playing. Under the gaze of domination, I relegated natural sonic characteristics organically produced by the body of the instrument (squeaks, sticky pads, cracks between notes, the way that certain notes are sharper or flatter and always require extra care to produce) to the realm of mistakes and structural flaws. These “flaws,” however, alert me to my instrument’s autonomy and language of animacy. By giving space for my flute to access a second language through the use of a looper, sonic imperfections were recontextualized as evidence for my instrument’s bodily autonomy, thus deepening my sense of sonic intimacy with my old silver friend. I wonder how this relational awareness can be extended to other relationships — to land, oceans, rivers, forests, systems, economies, institutions — that ache for transformation at this time.

Time and time again, under circumstances of both radical pleasure and profound duress, music reveals itself to be a social-emotional technology that humans use to connect, communicate, and co-regulate our socially attuned nervous systems. How might we then use frequency and vibration to repair relational harm and facilitate just transitions? How might we, as Robin Wall Kimmerer describes in her breathtaking book Braiding Sweetgrass, learn other “languages of animacy” through procedures and interactions that engender sonic intimacy? How might sonic intimacy help us to uplift and protect the autonomy and agency of our non-human and non-animal neighbors?

The English word “apocalypse” is derived from the Greek “apokálupsis,” meaning “uncovering” or “revelation.” Through each round of collective uncovering, how might music help us integrate hard and necessary truths? How might this kind of sonic practice shape the way we attend to collective crises? How should we use music and sound to reach across communication gaps and repair fractured relationships with our human, non-human, animal, and non-animal neighbors? Engendering this level of consideration for all of our neighbors is, in part, the decolonizing and restorative potential of music.

AR: Why the title Lucid Dreams?
SC: Because I think we’re in one.

While conducting research for this project, I came across a series on Netflix called The Mind, Explained. Watching the episode about memory, I was delighted to learn that dreams and memories activate the same areas of the human brain; indeed, the dreaming human brain can only conjure faces we’ve encountered while conscious. In other words, vivid encounters with our own imaginations are mirrored reflections of memories rearranged by time and alternative possibilities. Black temporalities are not linear: memory is in constant conversation with our visions for the future, and music is one tool to bridge the temporal gap between memory and imagination.

In the midst of disaster, we encounter state-sponsored mechanisms (including cultural institutions) that incite nostalgia and trigger mass forgetting. Such gaslighting, by way of saccharine sedative, is one mechanism through which the State enacts an insidious operation to infiltrate and steal the public imagination. We cannot imagine if we cannot remember. To activate imaginations that envision liberated futures, we must, in that process, refuse nostalgia and embrace practices that cultivate habits of remembrance.

Historically, sonic tools have been used across many diasporic lineages to crystalize and encode memories for safekeeping and future use. Roadmaps to liberation are embedded in the very lyrics of African-American Spirituals like “Wade in the Water” and “Follow the Drinking Gourd.” Samples, remixes, and even holograms (as seen with the post-mortem reappearance of Tupac Shakur at Coachella in 2012) can revive the zeitgeist of political movements, creating new musical contexts for messages that still hold relevance today. Performance offers a sacred time-based container in which we reactivate dormant memories. Within this active and fluid time capsule, we find ourselves in a fourth temporal space that sits between past and present, present and future, ripe with possibility.

This series ends with a performance in which I introduce Pluto Noir to the public. Pluto’s origin story echoes the lineage of Drexciyan tales of the Black Aquatic. She harnesses vibration to codify and activate memories recovered from the archives of the astral plane and other liminal spaces. Forging a partnership with the element of water, she experiments with frequency and vibration to transport these memories across multiple dimensions and temporal planes. Between what is remembered and what is imagined, we find ourselves immersed in the depths of Pluto’s very own Lucid Dream of the Apocalypse.