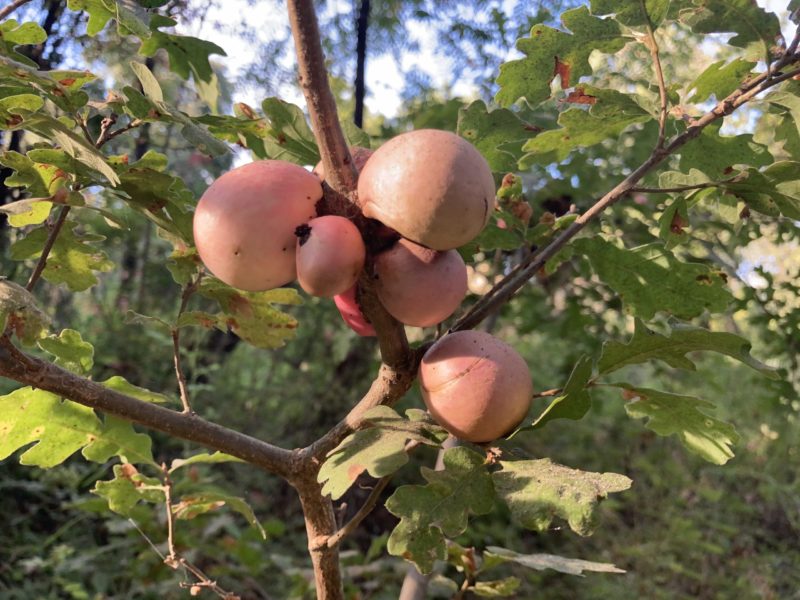 I am sensitive to noises but somehow wind chimes do not disturb me. In fact I am fond of wind chimes. The wind is faultless or at least blameless. Were it a person manipulating the chimes then I think I would mind, no matter how like the wind their disturbances. Elsewhere from trees, especially oaks, hang, or rather grow, galls: the swollen forms, often orbicular and incongruously pink, which insects (and less commonly fungi and mites) induce trees to grow and in which the inducing insects’ larvae mature. A gall might hang from a tree for three years and then fall to a sidewalk. The weight of a gall is unsatisfactory, like Styrofoam. No soft interior that gives sweet juice. The gall, unlike the apple or the peach — both forms the gall resembles — has not enlisted me for its reproductive scheme: no seed for me to swallow and pass. Still a fruit reminds us of sex not because a fertilized flower enfolds a seed but because it blushes, like me.

However a gall is not a plant despite being formed of plant material, and therefore a gall telegraphs thickness. A gall is something that happens to a plant, like a blush is something that happens to me. Whether the material of a gall is of insect or plant is irresolvable. It is easy enough to find images of galls in cross section, and it would be easy as well to make my own cross section of the galls I’ve collected and set up on my desk. But that would ascribe a false sense of consequentiality to the act of revealing. All I gain by looking inside a form is another angle of vision; whereas I’d like not to look but to be seen looking, meaning I’d like to blush under the blush of the gall. And still whether I’d like to blush is beside the point, a blush being what arrives unordained. A gall is pink, the color of blush. But the blush of the gall entails alongside its complexion its engorgement: the swelling of the tissue of the tree too is an index of its capacity to be affected, or in other words its capacity to blush. No mystery then that certain oaks host hundreds of galls while other oaks of the same species on the same block are bare. Neither is the brevity of a blush set beside the durability of a gall a surprise: spelled backwards, a gall is a lag.

I would like to abandon the language of benefit. Whether the relation of wasp to oak is a form of parasitism or mutualism, is on either side only an affirmation of an economic model of utility. The wasp and the oak do not make an alliance because they have agreed the enclosure of the gall will benefit both. Instead the gall facilitates a form of sharing in which the insect and the plant give each other what they have — the insect the inducing injection and the egg, the plant the outgrowth of tissue — not based on a calculus of benefit but a drive for intimacy. While I won’t deny I’m under the spell of sentimentalism here — as if my predilection for blushing hadn’t confirmed that already — neither do I mean to idealize a state in which the borders of the self (the insect self, the tree self, the my self) seem suddenly less stable. That the wasp and the oak can get together and regularly do so in such lurid forms as galls isn’t a function of a likeness or conflation of wasp selves and oak selves but instead architectural evidence of an encounter between different sorts of bodies.

My field guide to California’s galls explains that it is unclear why galls are so extravagantly colored and shaped. But this is exactly it: the pleasure of proximity and difference is in the unforeseeability and even unexplanability of the forms that swell out of such intimacies. What I want is what I won’t see coming. My ultimate fantasy: to be struck by a falling gall, to hear wind chimes without wind, to blush again.

On botanical taxonomy and flatness, see the fifth chapter of Michel Foucault, The Order of Things: An Archaeology of the Human Sciences.

On the history of differential capacities to be affected see Kyla Schuller, The Biopolitics of Feeling: Race, Sex, and Science in the Nineteenth Century.

On the racialized origins of theories of symbiosis, see Zakiyyah Iman Jackson, Becoming Human: Matter and Meaning in an Antiblack World. By way of a reading of Octavia Butler’s short story, “Bloodchild” (a story which features, as does the creation of a gall, an ovipositor: the insect’s egg-depositing phallus), Jackson offers that symbiosis is not a guarantor of freedom or the absence of hierarchy. Rather “symbiosis is a theory that considers the different forms interdependent relations can take.”