“I needed this to be here” 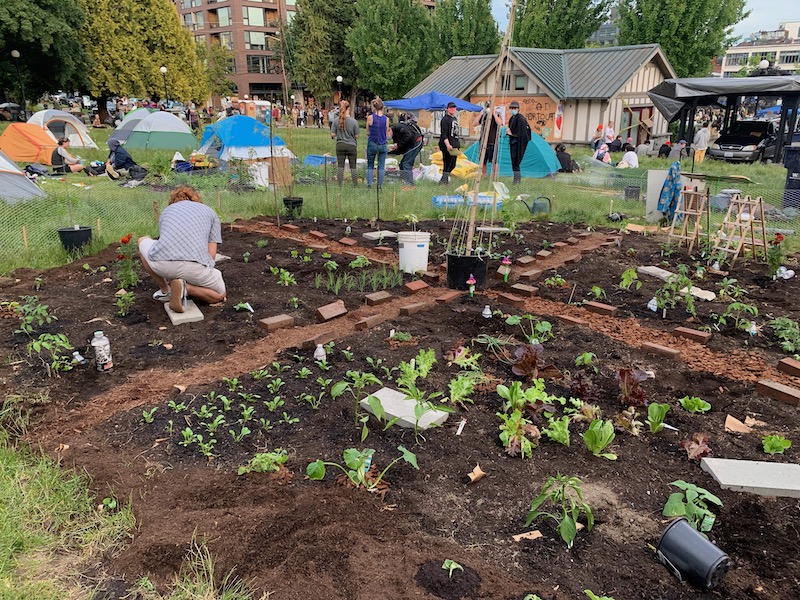 The early stage of the CHOP Garden inside the Cal Anderson Park. All photos: Jeffrey Hou, June 2020.

From June 8 to July 1 of last year, tens of thousands of Seattleites took part in an occupy action, one of many Black Lives Matter protests in the wake of George Floyd’s death. As Seattle Police retreated after days of intense confrontations with protestors, a six-block area in the Capitol Hill neighborhood was proclaimed an “autonomous zone,” taken over by protestors. Inside the occupied zone, one could find “no-cop” co-ops, conversation circles, community kitchens, and medical aid stations, tents for the occupy protestors — and a vegetable garden inside the Cal Anderson Park, around which the occupation started to coalesce. The movement eventually became known as CHOP (Capitol Hill Occupied Protest).

The garden inside the park was started by Marcus Henderson, a newcomer to Seattle with a passion for guerrilla gardening who took a shovel to the site and began digging as the protest began. What occurred afterward was a remarkable instance of insurgent, participatory urbanism, exemplifying how gardens can transform protests and serve as sites of resistance. Almost as soon as Marcus started digging, he was joined by fellow protestors; within days, what had been social distancing circles (mowed patches of grass) inside the Cal Anderson Park became food-producing gardens; a place of refuge inside the tense occupied zone.

Gardens and gardening are not new to protest sites. During the Occupy Wall Street movement in 2011, the crowd was taught how to make seed bombs and grow winter greens and beets in flower beds inside Zuccotti Park; in Taiwan’s Wild Strawberries Protest in 2008, a guerrilla garden produced vegetables, symbolizing a determination for long-term occupation. Neither of these, however, was comparable in scale and magnitude to the gardens inside CHOP, which took over an area about one-tenth of the 7.37-acre park. But the size and magnitude were only a small part of the significance of the CHOP Garden as a site of resistance.

Asked about the role of the CHOP garden, Marcus responded, “People who hadn’t been down at the protests were now seeing something they could join in.” He further added that there had been “a lot of people wanting to help, not knowing exactly what was helpful but just throwing resources at us.” Daniel, a neighbor who lives near the park, said, “What was nice about the garden [was] like, hey here’s a garden that’s really meant for everyone to come together, of all different ages, all different walks of life because it’s something they could all gather around and learn something.” In some way, the garden served as a safe space that enabled a wider spectrum of people to get involved in the occupied zone. Through direct and indirect engagement, the garden helped mobilize resources and connections well beyond the occupy protesters.

Learning was another key function of the garden. Once the garden became an attraction for people to visit the protest site, Marcus realized that it was a chance “to throw some knowledge at them, introduce race and inequality and land justice and land sovereignty and food justice and all these concepts that [the team] feels are integral to the movement.” As the garden became a popular site for visitors in the occupied zone, it served as a vehicle and medium for impromptu interactions and conversation about the issues of races and justice in the built environments and about the connections between land, culture, and community; the protestors also believe that it served as a bridge between them and the unhoused individuals living in the park.

Neighbors around the park were divided in their views toward the CHOP Garden. Some welcomed it while others were upset that the garden took over an area of the park commonly used for outdoor performances. Yet its very presence opened up conversations about how the park could serve different populations and become more inclusive. “It’s a well-used and loved park. For me, the healthy part of this is questioning, well, could it be better?” said Blair, a resident who lives near the park.

One of the most powerful aspects of the garden was how it deepened the meanings of the protest movement. “The fact that it was a garden represents so many different narratives — as a protest site, [a place for] land acknowledgment, as a memorial for the events, a place for speeches and music, for sharing of food from the garden to those who came by,” said Kelley, a volunteer at the garden. “Yeah, I can see a garden symbolizes growth, an abundance for everybody, and Black Lives Matter is about inequality,” said Tim, another nearby resident. 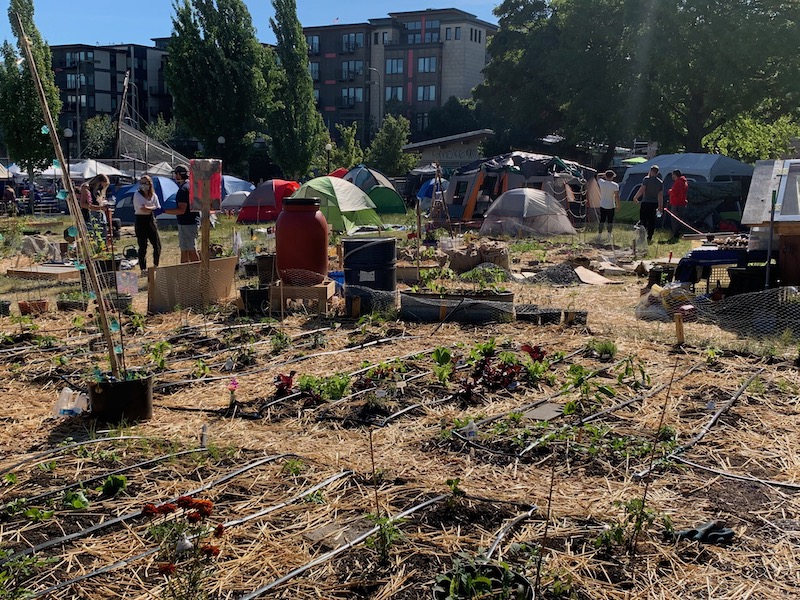 The CHOP Garden turned the park into a productive site.

In a personal yet collective manner, the garden became a place of refuge inside a tense occupation zone, where external threats were issued by anti-protestors, and multiple shootings occurred within the occupation. “A lot of people ended up coming through there to rest, to sit by the garden, and put their hands in the dirt,” said Aurora, a protestor. “Beauty and peace in the center of all the chaos.” “It brings so much joy to people. Even just recently, someone came over and was like, ‘I needed to see this. I needed this to be here.’ It’s such a healing space,” said Laney, another volunteer at the garden.

Perhaps because of the emotional connections people formed with it, the garden has helped sustain the momentum beyond the occupied protest, channeling the energy into projects focusing on longstanding challenges and inequities in Seattle, including unequal access to fresh food and economic disparities among neighborhoods. After the protestors and volunteers were evicted from CHOP on July 1, 2020, Black Star Farmers started working with gardening and urban farm organizations outside Capitol Hill, in communities where the challenges of food access are most acute. The petition to save the garden ultimately led to a public process to re-examine issues of inclusivity at Cal Anderson Park and use it as a model for the rest of the city. 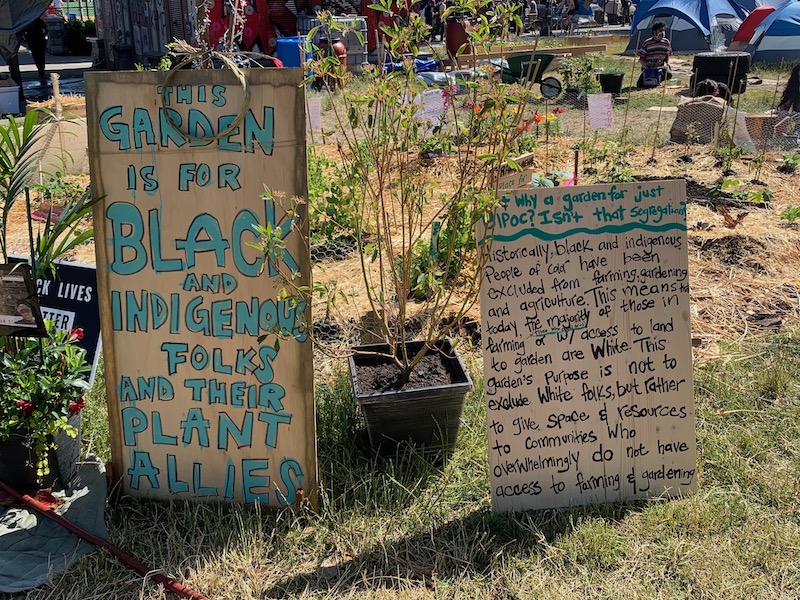 The CHOP Garden as a vehicle for re-centering the narrative of the occupy protest.

In many ways, what took place at the CHOP Garden paralleled the benefits of urban gardens commonly known to gardeners. Through the years of researching urban gardens and interviewing gardeners in Seattle, I find that gardens often serve as a place of healing, sharing, and socializing. Besides growing food, they provide opportunities for participation, learning, and community building. They bring together people and cultures in ways that few other forms of public space can. Although the CHOP Garden has ceased to operate after the eviction, the garden has transformed the protest and enabled the movement to find new paths beyond the occupied site.

The CHOP Garden and the ongoing engagement after the protest serve as an example of participatory urbanism that is driven and defined by the actions of citizens and community groups. Unlike the typical participatory design process limited to the gathering of community inputs, the making of the garden transcended the tensions and confrontations on a protest site by functioning as a place of mobilization, refuge, and learning. Started as a spontaneous act by an individual, through the engagement of others including those now beyond the original site, the project has joined the struggles not only to occupy but also to remake the city.

As I left Seattle in mid-June 2020 to join my family in Taiwan, I asked my student Jocine Velasco to carry out interviews with Marcus Henderson and others. I am grateful to her for this work, to Kelley Pagano for her insights and assistance in this research, and Marcus Henderson for his inputs for an earlier version of this article. The work would not be possible without their support.