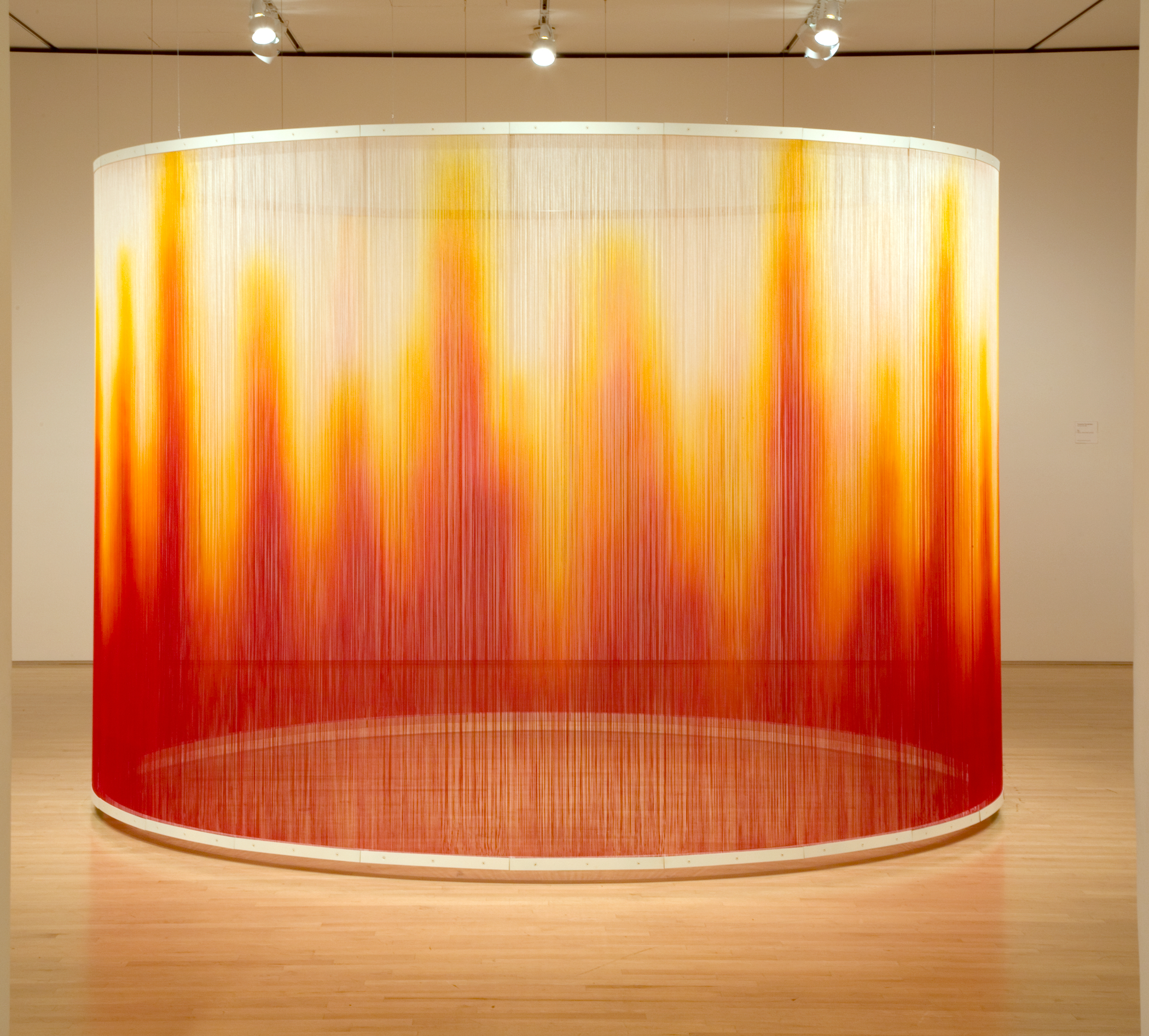 “There is something infinitely healing in the repeated refrains of nature — the assurance that dawn comes after night, that spring comes after winter,” Rachel Carson reminds us. In the height of the pandemic, many of us relied on these predictable patterns for comfort: the warmth of a vitamin-D drenched sunrise, or the promise of green growth after rainfall. It is becoming increasingly clear, however, that the refrains of nature are no longer in harmony.

Last year, California witnessed its most destructive wildfire season in modern history. Smoke suffocated the state and shrouded us from the sun. The word wildfire conjures a force that is feral, uncontrollable. At first glance, Teresita Fernández’s Fire (2005) lives up to its name, dynamic in movement and intimidating in scale. Only upon further investigation does the optical illusion reveal itself: the flickering hues of red, orange, and yellow are soft threads of silk yarn, perfectly contained in a ring suspended from the ceiling.

Fernández rematerializes the concept of fire, this resource we think we know so well, rendering it tame and tender. After all, the fire we utilize on a daily basis is at our command — a single flame from a match, a golden crown on a stove, a slow upwards procession warming us and our loved ones. Fernández often challenges the viewer to look closer, her choice of materials uncovering hidden histories of landscape and the environment. In her 2017 exhibition Fire (America), multimedia landscapes charred and burned by fire reveal the antagonist is not fire, but settler colonization and the resulting suppression of Indigenous peoples and their land technologies. 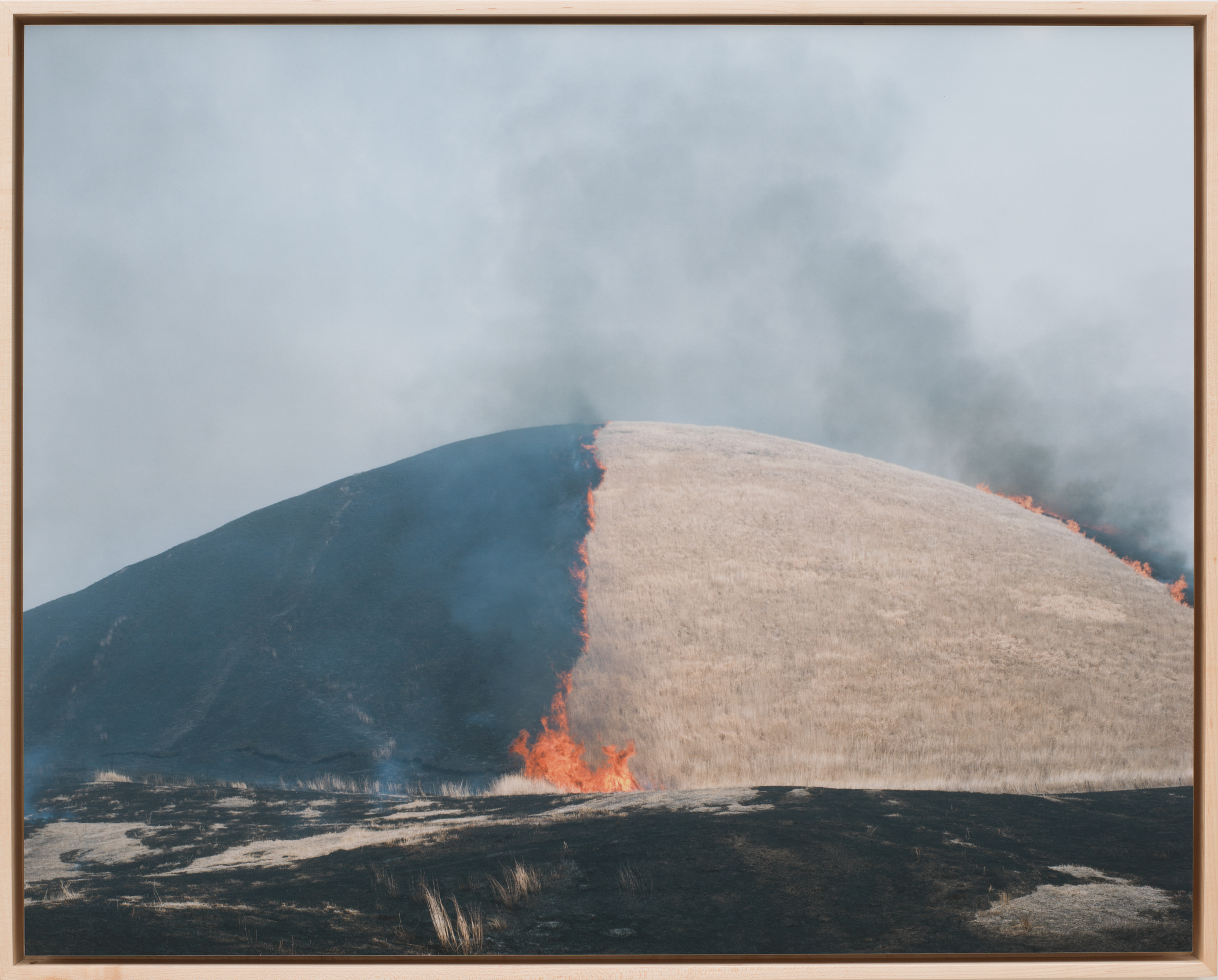 Many assert the Anthropocene age began with colonization and the industrial revolution, as societies favored mass production over Indigenous practices of sustainable living. The land on which SFMOMA operates is home to the Ramaytush Ohlone. The Ohlone, like other Indigenous peoples throughout the world, developed controlled burns to tend and cultivate the terrain. This farming technology, known as yakihata in the Japanese language and most commonly as slash-and-burn in English, harnesses fire as a tool, releasing it on slash (downed and dried vegetation) to recycle the understory, eliminate disease, and fertilize the soil for new growth. Before Indigenous land care and controlled burns were criminalized by the National Forest Service in 1891, trunks of giant sequoias demonstrated signs of fire every seven years, like clockwork.

These ignitions were conducted according to the rhythms of rain, to ensure the seeds sowed would be nourished and the regenerative cycle completed. Writer and scientist Robin Wall Kimmerer, an enrolled member of the Citizen Potawatomi Nation, teaches us the survival of all species depends upon cycles of reciprocity: “Reciprocity is how the biophysical world works. Balance in ecological systems arises from negative feedback loops, from cycles of giving and taking.” Ecosystems adapted and depended upon these refrains of fire and rain to maintain their balance. Fernández’s sculpture prompts us to reconsider our relationship with fire, to see the beauty and the motivation behind its desire to burn.

Natural phenomena like fire and rainbows are often personified or attributed to an animal in origin stories as a means to foster a greater connection or understanding. We give names to fires and storms and describe them as within our grasp, through phrases like “contain the fire” or “catch the rainbow.” We crave intimacy with these forces greater and more colorful than ourselves. 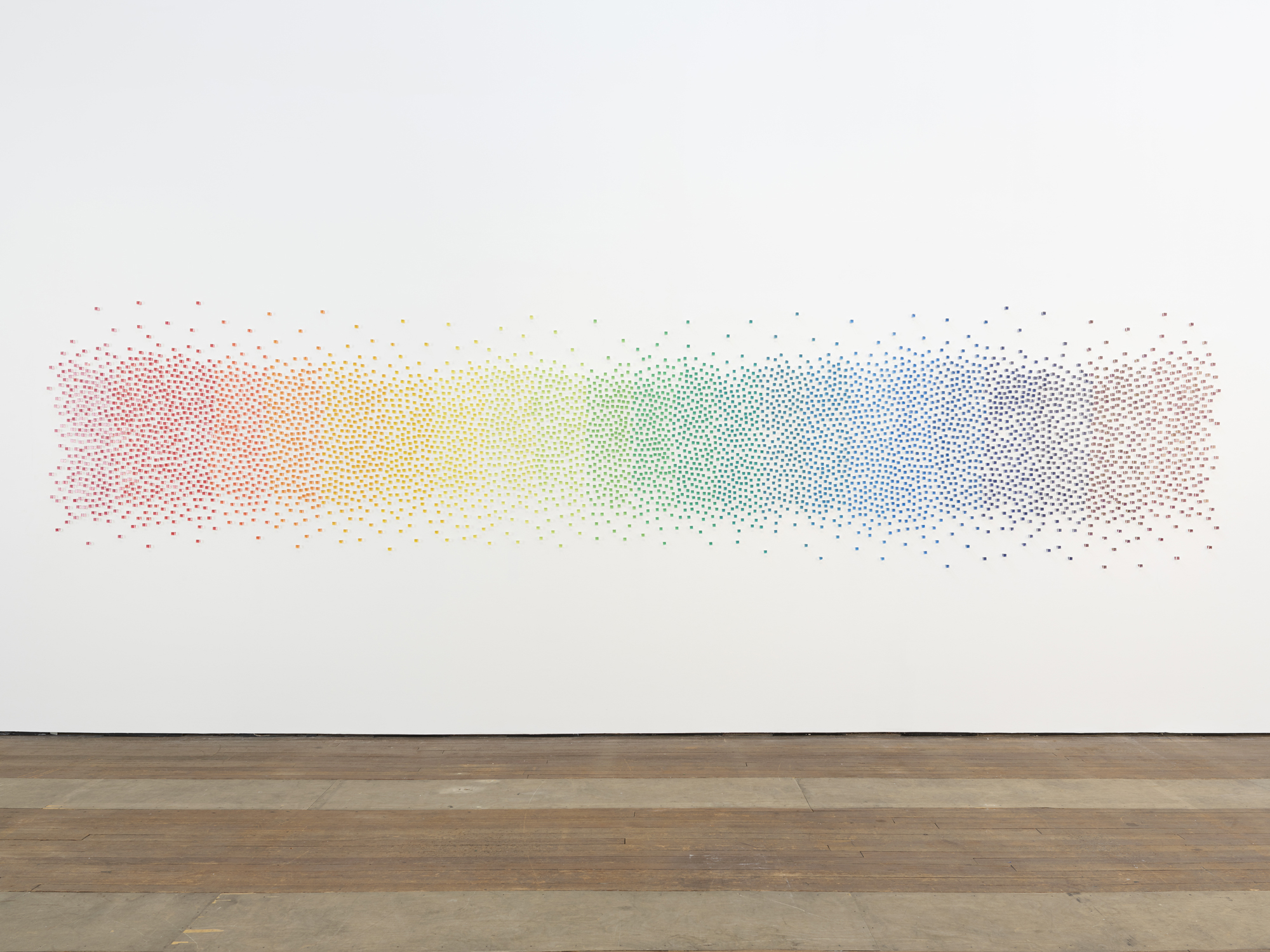 In 3:37 p.m. (2001), Fernández distills the essence of a rainbow. The installation consists of colored acrylic cubes magnetized to the wall — each cube represents a droplet of rain, each color a reflection of sunlight striking it. Mathematician René Descartes explains a rainbow is essentially a feedback loop, in which rays of light travel from the sun, ricochet off raindrops, and reflect chromatic rays to be perceived by an onlooker. The woodcut illustration included in his treatise Discours sur la méthode (1637) portrays the onlooker fully incorporated into the landscape, a key factor in the equation. 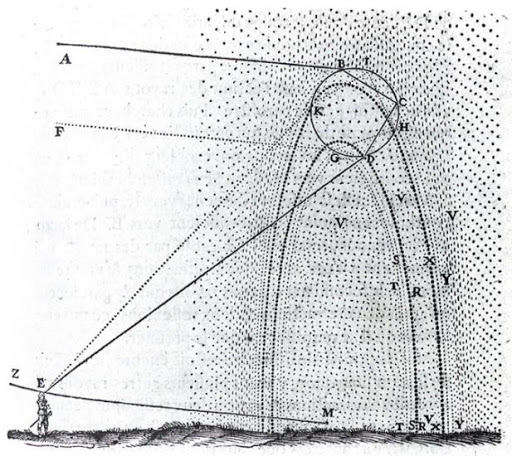 René Descartes’s sketch of how a rainbow is formed, Discours de la méthode (1637)

As you encounter 3:37 p.m., the spectrum of colors vibrates and adjusts according to your unique line of sight. The refraction of light emanating from the cubes satisfies (and tricks) the eye, causing a physiological reaction one might describe as wonder. Picture a rainbow arcing across the sky in the late afternoon light. As Fernández makes permanent that which is impermanent and tangible that which is intangible, she leaves the viewer feeling slightly closer to this larger-than-life spectacle.

She explains, “We have a tendency to think of landscape as something outside of ourselves, and that’s a notion that I want to invert — we’re actually just an extension of the landscape, we’re operating on the very same cycles.” The past year has revolved around transition, loss, and mourning. This revolution is felt across species, across lands and oceans, as we all face the threat of extinction. Viewing these works in the galleries makes me appreciate natural wonders found outside, even as it engenders greater concern for their constancy. How does our perspective, our involvement, affect the cycle? What if we continuously refuse to reciprocate? Will we be forced to rewrite these stories, these songs for our children? Will we be left with nothing but objects of artifice to spark wonder in white-walled galleries?

Contemporary Optics: Olafur Eliasson, Teresita Fernández, and Anish Kapoor is scheduled to be on view on the museum’s fifth floor into March 2022.