The Bathroom Is The Place I Go to Cry 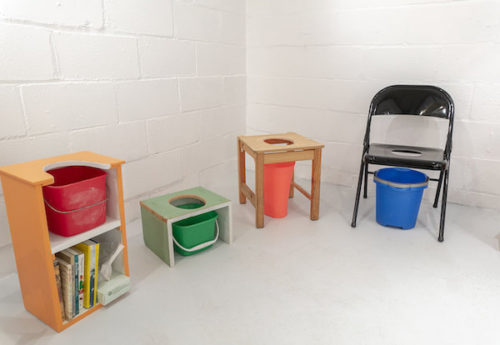 I’m sitting in the sand at Crown Beach, a 2.5-mile-long strip of windy beach along the Alameda shore. I lived in San Francisco for sixteen years and never visited this beach, but now I live in Oakland and go nearly every weekend.

Alameda was a Naval base until 1997 and the military is still working on cleaning up the lingering radiation in the former airplane hangars. The radiation came from radium paint, a glowing green mix of the radioactive element radium and phosphorous used to illuminate watch faces, or in this case airplane instrument dials. Many radium dial painters died of cancer, but the absolute worst cases were among a group of women now known as the Radium Girls (of course they’re remembered with a diminutive). Between 1917 and 1926 the Radium Girls painted watch faces in three US factories. Factory bosses told them the paint was harmless and instructed them to maintain their brushes by putting the tip of the paintbrush between their lips and pulling the bristles back into a fine point. The women ingested so much radium their bones dissolved from the inside. 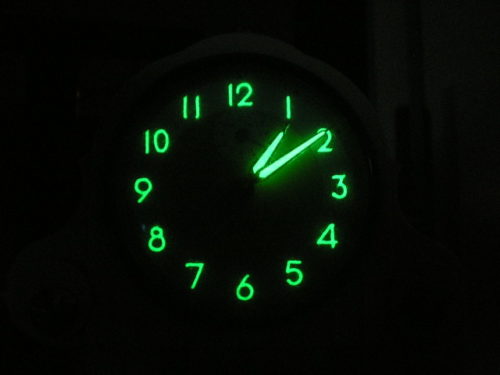 Capitalism values the labor that bodies produce without valuing the bodies. We’re clapping nightly for essential workers but the state won’t provide the PPE they need to stay healthy. When word got out that the women in the radium dial factories were falling ill, factory owners bribed medical professionals to say they had syphilis.

There are a lot of people at Crown Beach but everyone is spread out, so it doesn’t feel crowded. We’re all still under shelter-in-place but the only evidence of it is a circling police helicopter and handfuls of people in masks. I’m with my boyfriend, it’s been just the two of us for six weeks and the switch to being in public with strangers is harsh. A man to our left is haranguing his wife, “You always move my phone and my keys.” Another guy is soothing his crying kid, “Go ahead and let all your feelings out and when you’re done, we’ll go in the water.” The family in front of us have brought a pet bunny on a leash. It is white and gray and seems more or less content to snack on the bowl of lettuce placed in front of it while intermittently lifting its paws one at a time to shake the sand off. There’s a loud group of guys to our right, they’re flipping off the circling helicopter, throwing their hands up in a come-at-me-bro gesture.

I want to stay longer but we both need to pee and we’re not sure if the public restroom is open or if it’s even a good idea to use it. “The bathroom situation is giving me anxiety,” my boyfriend says. He rolls his eyes and adds, “Whatever, I’m trans. All bathrooms give me anxiety.”

Now I’ve cathected to care as my primary mode of feeling. Is everyone okay? What can I do to take care of the people around me? We are tasked with keeping each other safe, and through this I feel connected to so many people. My neighbors wave and smile as they cross the street to maintain distance; an act that still feels rude is now a form of care. In the beginning I resisted the enforced distance. I thought if I avoided people, they would think I was stigmatizing them. Now I understand that I’m just as likely to be the threat.

I once cut my finger in a grocery store and the owner nonchalantly wiped my blood on his apron. This inappropriately intimate act made me feel loved in a way that I wish I could give to everyone around me.

I get a text from a friend, a nurse at SF General. It’s a selfie of him at work with his mask on, the folds of which look like a vulva — my desires merged.

At the end of February, a few weeks before social distancing mode, my friend Emmett Ramstad comes to visit. Emmett is an artist and many of his recent pieces are about addressing the needs of the body. A 2018 installation features a wall of tissues, a hand washing station, and a series of handmade toilets huddled together like a team. These subjects — bodies, desire, caretaking — are often our first point of connection.

Emmett tells me about a piece he recently installed in a Minneapolis gallery, The bathroom is the place I go to cry: An astrologer told me I would never run out of toilet paper. In the piece, two hundred rolls of toilet paper are suspended from the ceiling and stacked along the walls of a bathroom, turning it into a padded, soundproofed space. He’s sitting on the toilet in my guest bathroom as he describes it and turns his laptop to show me a picture. The installation is so inviting and cozy. The plushness and blankness of the toilet paper remind me of a bed in an expensive hotel. 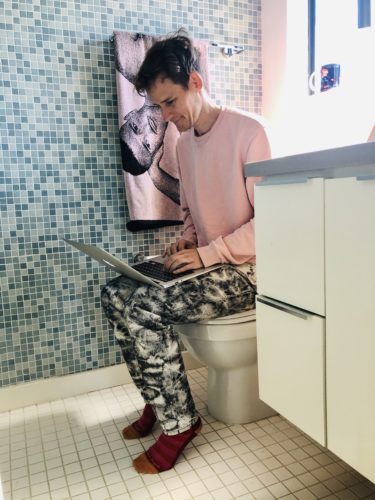 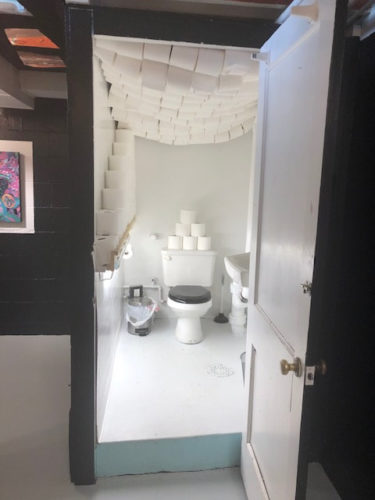 The bathroom is the place I go to cry: An astrologer told me I would never run out of toilet paper, 2019

At twenty-two I worked as a concierge at one of the downtown hotels in San Francisco. The lower level bathroom was a heavily trafficked cruising spot. All the downtown hotels had cruisy bathrooms and there were pamphlets that told you if it was the one on the mezzanine, or the terrace, etc.  This was the early nineties. I’m sure hotel bathrooms still see plenty of action, but on the whole San Francisco feels like a less-welcoming place for public sex. Emmett’s clean, white bathroom makes me nostalgic for the bathroom at The Lexington Club, San Francisco’s formerly beloved dyke bar. The Lex bathroom was the opposite of Emmett’s. It was a cramped, dark, graffiti-covered space with a toilet so many of us fucked on, our microbiomes mingling. I must be related to every queer person in the Bay Area through that shared microbial population.

In early March, when we could still leave the house but had stopped hugging and shaking hands, I go to a Fred Moten talk at The Lab. Moten speaks about the interconnectedness of bodies and the fiction that we are discrete, individuated objects with beginnings and ends. “What does it mean to have a body?” he asks. “You are not autonomous. When you hurt yourself, you hurt me because I care about you. Our bodies are not our own in the way we tell ourselves they are.”

Emmett’s toilet installation seems prescient now, in the context of quarantines and panic hoarding, a bathroom filled with toilet paper is unbelievably opulent. Having sex in that bathroom would be like pulling off a bank heist and rolling around in a pile of money. 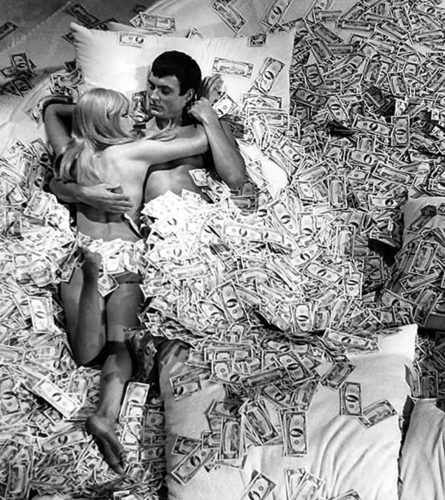