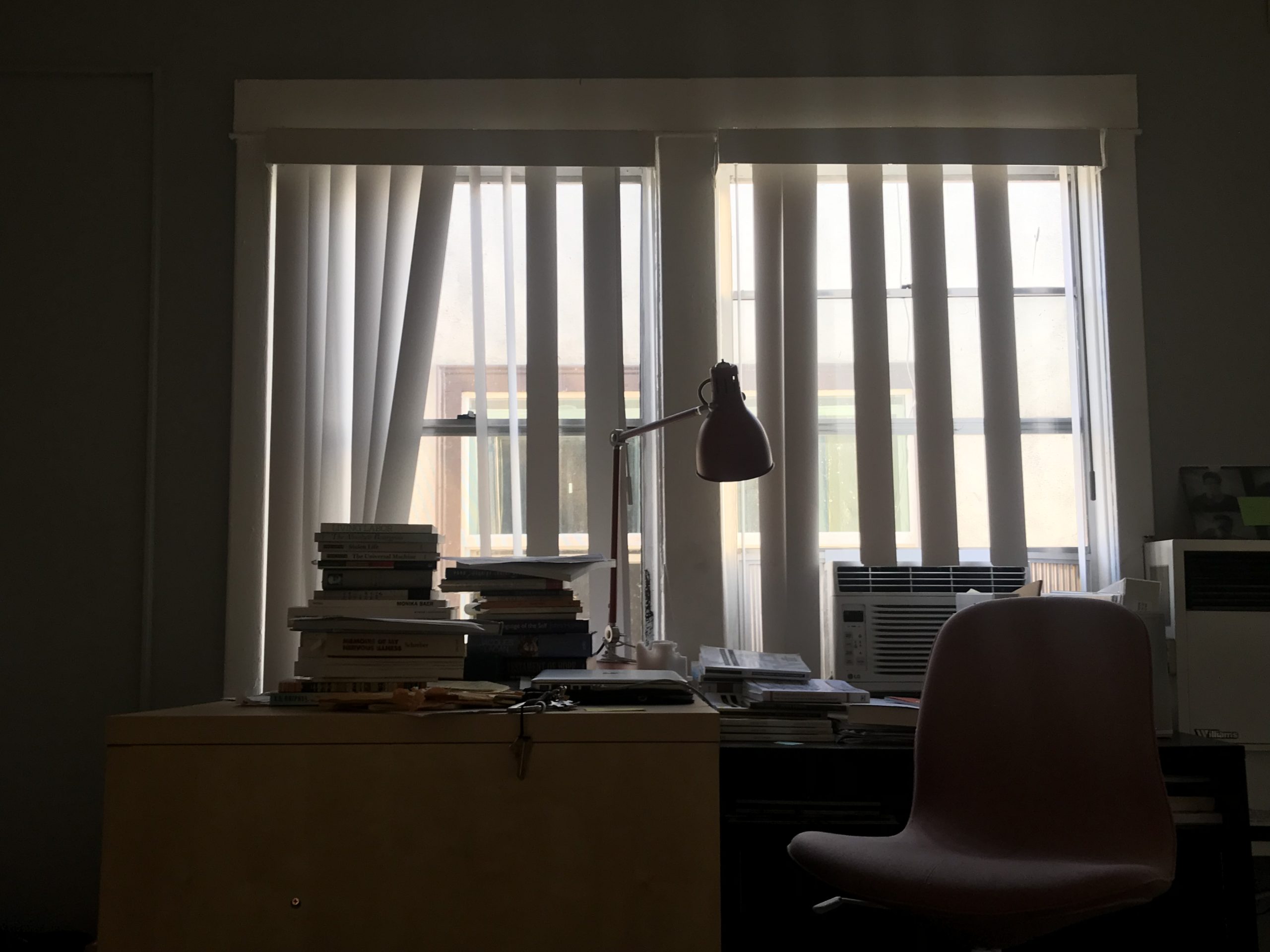 When the resident at the clinic comes to conduct my physical exam, I rehearse the line I’ve been practicing for months: “I’m here to be referred to an autism specialist.” Because diagnostic criteria often cause disagreements between autistic patients and healthcare providers, specifically about what constitutes “deficiency,” I focus on the biological and environmental evidence I have been stockpiling for months. I tell him about the shutdowns that leave me without verbal faculties if, for instance, a bright light shines in my eyes. I explain that some of these shutdowns last as long as twelve hours; that others appear intermittently throughout the week when I am stressed. I recall how a high-pitch, screeching alarm gave me brain fog and nausea while I tried to gather information about my delayed flight at the airport. I explain that I forget to eat or sleep, sometimes missing biofeedback that could help me avoid overworking myself; that I mistakenly assumed the fog was something everyone experienced. Even the people who believe I’m autistic forget I’m masking: a common behavior among autistics who have been bullied into hiding their stims, tics, and social awkwardness. In fact, I explain, I am so good at performing that sometimes none of us — myself included — can fathom why I would need help.

After a few questions, the resident hands me a generalized anxiety questionnaire and changes the subject. Confused, I describe another recent shutdown in which my tongue and face went numb. I couldn’t talk and my thoughts became disjointed. I worried that I would not be able to speak again. I describe to the resident how I lay incapacitated on a friend’s couch while she googled methods for treating the shutdown; the websites she found exclusively addressed parents of autistic children and compared shutdowns to tantrums, often implying that autistic children were somehow misbehaving because their bodies were responding to overstimulation. When I regained the ability to speak, I told her that someone I didn’t know cornered me and coerced me into giving him a hug, that something like this had happened before.

The resident interrupts this story and incorrectly informs me that autism is a disease. He reminds me that autism is a spectrum, then — as if rebutting me during a debate — asks why I would even want a diagnosis. Feeling overwhelmed, I redirect the conversation and once again inquire about seeing a specialist.

Eventually, the attending physician arrives. She, too, explains something I already know — the referral system — but this time with a tone that suggests I have difficulty understanding protocol, that she is talking to an oversized toddler. Clearly, the resident has conveyed his impression to her. While the doctor lectures me, I nod my head and let my face maintain the expression I know will appear emotionless. I understand that before I see a specialist who can help me, I will have to see a psychiatrist and receive another sweeping chain of referrals; that I’ll have to undergo examination after examination to prove that I have a lifelong neurological condition that includes sensory dysfunction. Because the wait will be indistinguishable from every prior infantilizing experience, it does not matter to me how long it will take for my diagnosis to be certified. Like I tell the resident, I just want an official document. Because I am tired of making my case. Because the details and scope, the arguments and evidence, the substance of my life: all of this is starting to seem remote.

Under the buzzing light of the visitation room, I feel the vomit-like sensation enter my brain. I watch the attending physician’s mouth so I can understand what she is saying, so I can better advocate for the client — pro se — when the fog in my brain remits. Yes, she is speaking; I can hear the sound. Yet the words are starting to unloose, the syllables detach. The static that congeals in my mind is made from the exact words that exit her mouth as they cascade one atop the other, forming a nearly impenetrable wall of sound. But if I am to receive help, I must continue listening. With the minutes I have left, I am trying, with as much speed as I can muster, to shepherd us toward reciprocal noncommunication.

In the months prior to my first visit to a healthcare facility in years — having recently received MediCal, a statewide insurance program which provides free to low-cost medical services to eligible Californians — I begin researching two seemingly unrelated interests: structures that move and store images, which I hope will inform future book covers I design, and disabled artists who privilege qualities such as honesty, sincerity, and urgency in their criticism. To be critical, I think, means to be painfully honest, to identify insufficient support; to perform integrity. But how and where do these concepts converge? What distinguishes a quality from the sensations it calls to mind? I am interested in syntactic, connective tissue; interfaces and media that conjoin sensory information — but also the range of effects and affects that become discernible when these connections are wittingly and unwittingly modified, turned on and off.

Meanwhile, I recognize that my focus keeps drifting to the socioeconomic barriers that reappear while I write this essay, which seeks to contextualize disability and Blackness as commensurate aesthetic paradigms. I want to write about the events in real-time, while I pursue an autism diagnosis, as if I am preparing archival footage I know will be reshaped into a lecture performance or documentary. The question for me is how to act when one knows one is under observation, when one has permitted oneself to become the focal point. I am disinterested in the historical trajectory that has brought disability and Blackness into academic discussion; I want to describe disability and Blackness as sensory and somatic experiences that one lives through, as environments one inhabits under the express condition that such sensory and somatic experiences happen above and below the frequencies where common language holds sway.

Throughout the piece, I have prioritized the surface layer, the anticipatory mode, and the writing I produced alongside this research that does not directly relate to this inquiry. I want to accommodate sensations that arrive prior to or alongside language and then disappear into the sensorium, the synapses, memory. In other words, chronological order is purposely thwarted, obstructed — it’s not something I consistently experience, so why should it appear here? Touching this obstacle at the beginning seems vital to the experiment I conduct, which does not seek to explain even when I am explaining, so much as demarcate a sort of durational rim upon which the writing may sound. 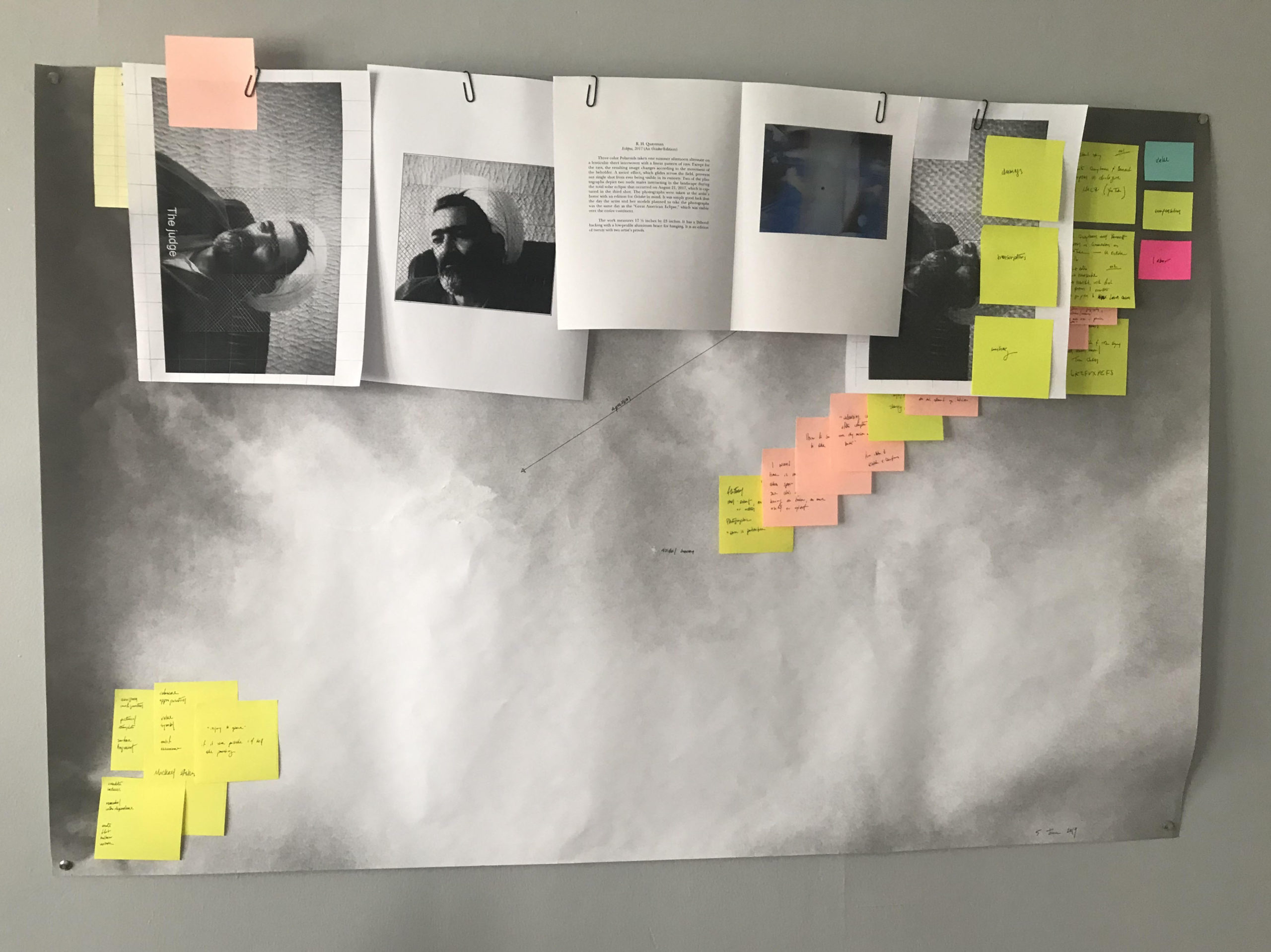 In the Adobe workspace where I process this information, the digital systems — RBG, CMYK, hexatone, Pantone, etc. — presage the relationship between color, sound, and frequency that I will later explore. In the future, these systems will help me understand feelings and the sensory experiences to which they correspond. Because I am searching for a way to articulate and expound information that I detect through my nervous system without or adjacent to verbalized language.

I become interested, for instance, in writers such as Helen DeWitt and Amina Cain who describe garments in their work, but also in the idea that these fictional garments are representations of color that is neither seen nor materialized; to me, this is no different than clothes referencing grammar or words. I become interested in painters such as Michael Krebber and R.H. Quaytman who use individual paintings as punctuation systems within larger exhibitions, but also artists who depend on books to conceive or organize their work such as Slavs and Tatars and Laura Owens. Central to this interest is the jealousy I feel when comparing a painting or sculpture to the writing that is later dispatched to caption, describe, and imitate it. Even when adequate language comes to me, something seems left behind, lost.

It seems clear at some point that my fascination with order and sequence must relate to the sentence as an organizing unit. But I want to know how the sentence and its syntax can inform our relationship to space if and only if they are forced to carry out a second operation: conjoining distinct experiences or media. Underscoring this search is a desire to articulate my experience as an autistic seeking a diagnosis as an adult. For example, throughout the discussions I have with my family, friends, colleagues, and medical advisors, I feel as though I am perpetually asked to perform in contradictory, disadvantageous, and rhetorically inconsistent registers.1 If I speak too eloquently, I learn, I will be disbelieved. After undergoing weekly autistic shutdowns in which my ability to speak evaporates, it becomes important that I understand when and where I should mask my competency. To receive the necessary accommodations, it seems, I will have to meet the cultural stereotypes associated with my disability. It is a familiar expectation given my experience as a Black person living in America, except in this case I am trying to find someone who can help me stop collapsing in public. The opacity that artists and scholars devise from their readings of Édouard Glissant stumbles at this point: if my disability is not legible on my body, how do I bring into view and contextualize it without relying on the diagnostic criteria that suggest I must be “deficient” to receive accommodation? What competencies are the disabled allowed to perform within bureaucratic institutions when their inability is expected (let alone preferred)? If my request is simply recognition that I will fizzle out from time to time if I’m too enmeshed in sensory information, in crowded rooms, will anyone give me space?

“The band drops out and the soloist walks to the center of the stage, where she puts down her horn. Darkened glasses block her eyes, so all we have is the remainder of the face, its wrinkles and folds. But what if the face does not work the way it is supposed? What if the countenance functions more like a sheet or screen than a face?” — Nathaniel Mackey, From A Broken Bottle Traces of Perfume Still Emanate2

“That feeling and its vehicle do not appear arbitrarily and our attempts to make them arbitrary reveal the particular means by which they are structured.” — Jacques Lacan, Seminar VI: Desire and Its Interpretation

“Rhetorical transparency often takes the form of a disclosure in which the speaker acknowledges something about themselves. Such declarations modify our relationship to their speech; listeners must accept or deny what was said to interpret its meaning. When someone speaks in the transparent register, they are relaying details that would typically be removed from the account. Transparency, in this sense, constitutes a condition or structure in which the armature, background, margin, or referent is embedded in the topmost surface as opposed to the framing or support mechanism. It is a way of sneaking evidential claims into the narrative space. Judgements and farce, too.” — Craig Owens, “Representation, Appropriation, and Power”

“The sentence has its visual information removed — it suggests, does not depict. This allows it to sit alongside another sensation, such as an image, and duplicates its meanings. Proximity contradicts whatever caption has been assigned to the image. The point is to insist upon that which cannot or must not be said, to express it in a vocabulary uncommon to its usual register.” — Journal entry in Brainstorm II, dated 20 February 2020