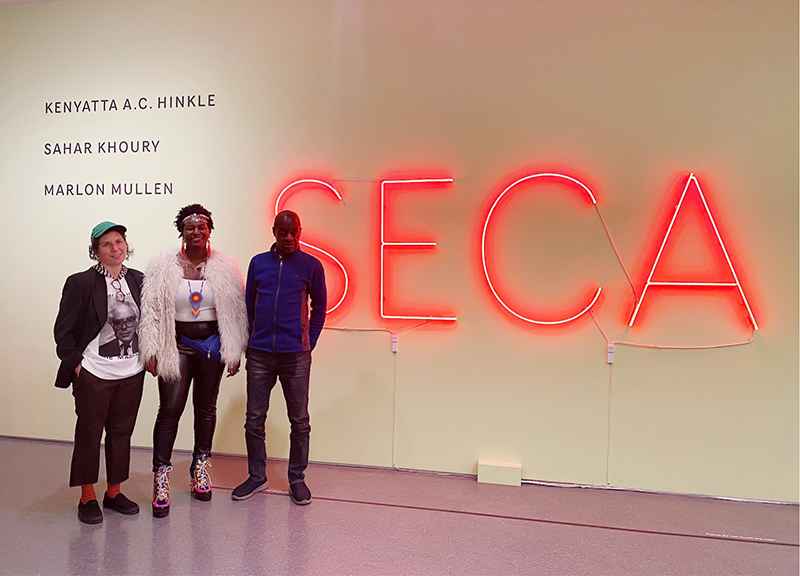 On March 5, 2020, SFMOMA hosted SECA 2019: Artist-led Tour + Mixer, featuring in-gallery presentations by Kenyatta A.C. Hinkle, Sahar Khoury, and on behalf of Marlon Mullen, Tim Buckwalter, NIAD’s Director of Exhibitions. The talks were followed by a reception in the Koret Education Center to celebrate the artists and their work.

It’s striking to write about art in a series called “Local Affairs” and have the process be intercepted by an epidemiological crisis of global proportions. The shuttering of visual art and performance spaces — some permanently — has riven the creative sector into various states of existential dissolution and reconfiguration. Live events have been postponed or canceled, exhibits sit cloistered, fiscal projections are in tatters. People now work from home, some with reduced hours; others are on the front lines, or joining the unemployment line. A historic moment, such unevenness. The news cycle incessantly grapples with COVID-19 and its discontents, from transformations of the reigning economic doxa to gross inactions resulting in further suffering. Yet we maintain a cruel optimism toward what societal shifts may come — facing the possibility of making some liberatory gestures during this time of indiscriminate global death, and the immediate reality of how we will or won’t pay this thing called rent.

Bay Area artists Marlon Mullen, Kenyatta A.C. Hinkle, and Sahar Khoury, winners of the 2019 SECA Art Award, currently have their work on display at SFMOMA; the thirteen other local finalists are prominently listed in the catalog and materials. The show was originally scheduled to run until April 26, long before the museum is now set to reopen, and is currently planned to be extended into early fall. When people will be allowed out to see it is still a question. 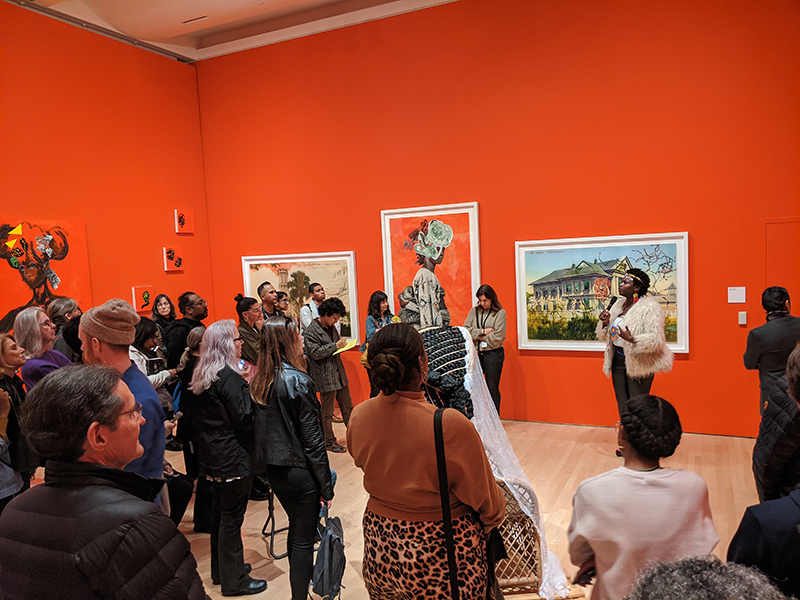 SECA does the good work of focusing on and supporting living artists, granting an exhibition of new, vibrant — and, importantly — local work. Was it only last month we gathered to hear them all talk? Yes. We are in the galleries, bodies close together. Hinkle begins her talk by saying “Hi y’all” to her creations. These pieces — surrounded by the toxic cadmium red paint that covers the walls — speak to disappeared histories as well as the pernicious legacy of imperialism on peoples and the land. Excavated postcards depicting enslaved womxn and antebellum architectures from West African colonies are blown up, exposing printing imperfections and physical disintegration, and further intervened upon with materials such as vintage National Geographic magazine clippings, glitter, and ink washes. The images’ former incarnation as 4 × 5 in. postcards embodied the British and French colonial reach; here the land strikes back at the seemingly abandoned buildings. A church, a plantation mansion, are taken over by mold, snakes, fire. Other works feature more red as backdrop: representations of the multi-breasted Pangaea painted in Jenkins green somehow transmutes to a perceived black atop this base. All works are from 2019 excepting one — The Sower, from 2016 — and all contain some use of this cadmium red. I flash on Godard: “it’s not blood, it’s red.” But no, we are in Hinkle’s world of “blood and sun,” one which renders colonialism’s violence and tragedy such that it cannot but permeate each viewer’s entire field of vision. 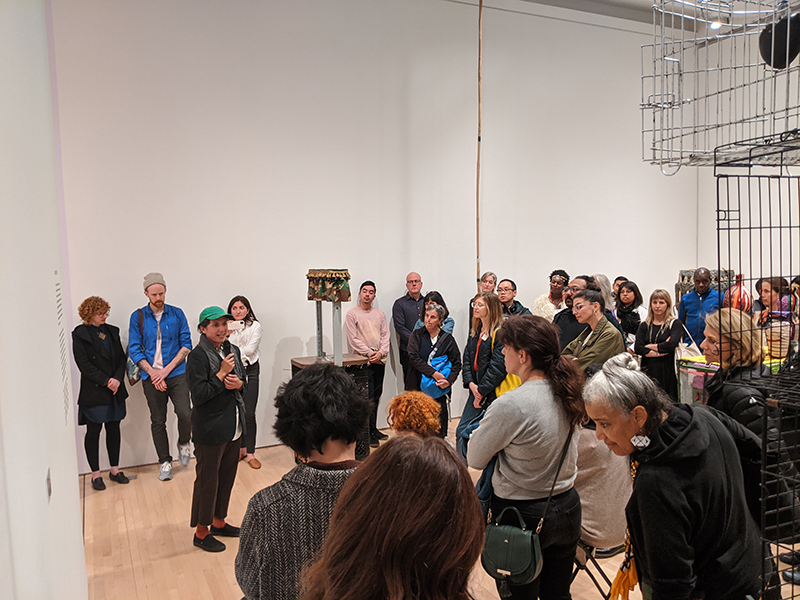 Khoury’s sculptures aggregate and remix excess materials from her local environment, embedding them with elements of personal residue and fancy. An absurd glazed ceramic enlargement of one of her earrings hangs from a vertical structure of cages; a series of belts bind together fixtures of a security gate with colorfully striped paper and textile mâché and sand amphorae stacked atop. Salvaged objects range from crushed pennies scavenged by train tracks near Khoury’s house to pink animal cages purchased from Berkeley’s industrial reuse warehouse, Urban Ore. These pieces and Khoury’s artist talk speak to the network of individuals and institutions behind this collection, produced in 2019. Khoury gives shout outs: how the ten-carat gold on Gold Luster Heart Charm wouldn’t exist without John DeFazio; the Rebar Topiary wouldn’t be possible without the UC Berkeley kiln, where it was fired by Ehren Tool; and the once-a-revolution squeak of Schwarma Topiary was machined into being by Kal Spelletich — this last work conjured from GIFs of sculpted meat sent back and forth between Khoury and UC Berkeley faculty Anne Walsh, an artist whose work also incorporates intimate relationships. Khoury, a trained anthropologist, alludes through these works to the concept of structural vulnerability, each piece designating a different and curious mode of interaction between viewer and artwork, ceiling and floor. The sculptures as arranged in the room form a garden, perfectly tended to by Khoury, recapturing a combinatory value out of capitalism’s discards. By juxtaposing these materials in unexpected ways, Khoury assigns to them new relations and functions, outside those prescribed by the current economic order. 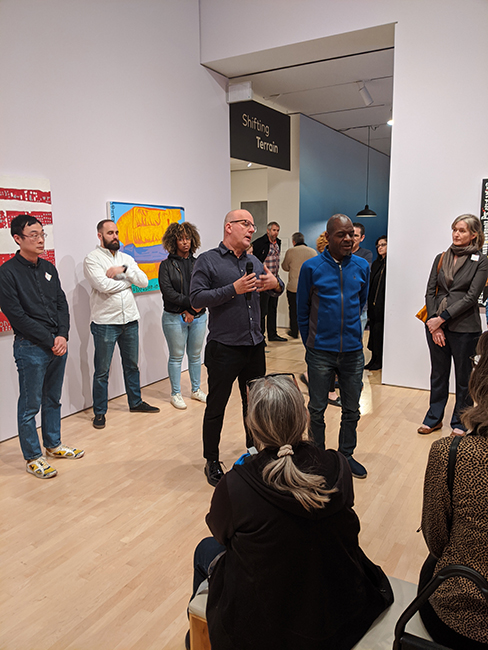 In the entry room, Mullen’s paintings dazzle in their hueful brilliance. Layer atop layer of self-produced paints and vibrant pigments densely demarcate each work’s figuration, reinterpreted from magazine covers of New American Paintings and Art in America. Mullen, who has had a studio practice at NIAD Art Center in Richmond since the nineties, is autistic and has expressive aphasia. Tim Buckwalter, of NIAD, speaking on behalf of Mullen, notes that SFMOMA has broken ground before in featuring work from artists who became disabled — works of Willem de Kooning post-dementia, and of Chuck Close post-stroke — but hasn’t until now featured an artist whose disability has spanned their entire life. Mullen paints wet on wet, a process made possible by way of horizontal painting atop a table. His remarkable colorist tendencies include utilizing materials like sand and dirt to achieve a greater paint density, and mixing acrylic with hand soap from the NIAD facilities to make whites more piercingly bright than is possible with titanium paint. Seeing these works in person makes one reconsider what sheer color can do, while Mullen’s insistence on a form based solely off magazine design language and cover artwork, becomes, in this viewer’s mind, a coded critique of the art market’s circulatory and self-referential mechanisms — what theorist Reza Negarestani once referred to as a “human centipede.” The most recent iterations of this collection, produced between 2015 and 2019, take Mullen’s adherence to the magazine-as-object to a new extreme: UPC barcodes are added, the painted sides of canvases reveal bindings and the mish-mash of page edges.

Does art shown in a closed museum exist? Empty buildings filled with art bring to mind the freeport art storage facilities Hito Steyerl writes about in Duty Free Art. SFMOMA’s public collection will similarly continue to hold value: individual artworks are the commodity par excellence, functioning as diversified assets within a larger portfolio. When this particular crisis subsides, and everyone is scrambling to catch up on their lost fiscal tidings, here’s hoping SFMOMA continues looking beyond the blue chip artists marking many of its halls, giving further support to artists and performers living and local, who — as this exhibit demonstrates — are still out here creating work.

Editors’ Note 4/27/20: This essay was edited to correct the following errors: Sahar Khoury’s earrings sculpture is made from glazed ceramic (not papier-mâché, as originally stated), while the vessels on top of the security gate are paper and textile mâché, and sand (not ceramic, as originally stated). Finally, Rebar Topiary, not Security Gate Topiary, was fired by Ehren Tool at UC Berkeley.