Epstein Brain is for the People 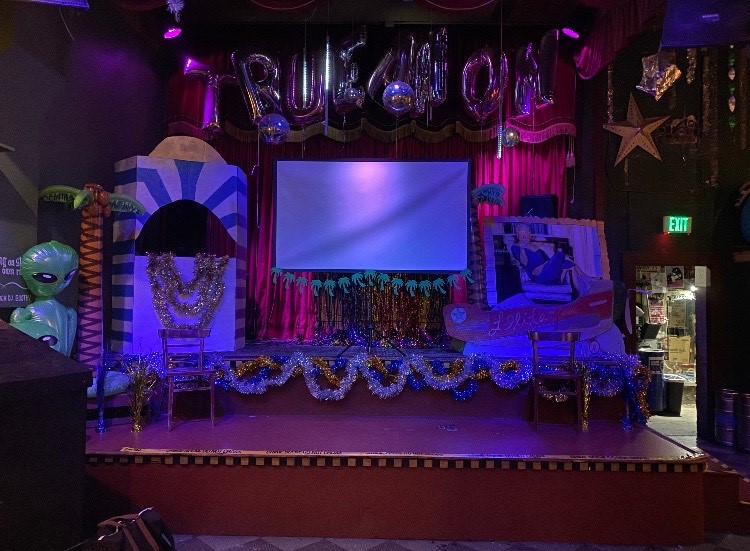 July 23: The San Francisco-based podcast TrueAnon debuts as the “one and only podcast dedicated to uncovering THE TRUTH” of Epstein’s life, crimes, and network of powerful associates. That same day, Epstein reportedly attempts to take his own life, though he claims to have been assaulted by his ex-cop cellmate.

August 10: Epstein is found dead in his jail cell after guards inexplicably fail to check on him.

March 3, 2020: California holds its primary election, where voters have the opportunity to nominate a Democratic candidate who did not know Epstein and has not received financial support from his billionaire associates.

I came down with a mild bout of Epstein Brain —primary symptoms include sputtering disbelief that Epstein actually killed himself and awkwardly bringing up competing theories in everyday conversations — shortly after his death, so it didn’t take long for TrueAnon to enter my podcast rotation. Though I’ve listened to most episodes, I had no clue what to expect of their first event, billed as a “multimedia terror production,” rather than a live podcast. Turns out neither did hosts Brace Belden and Liz Franczak, who met in San Francisco’s early aughts punk scene. Belden, better known by his former Twitter handle @PissPigGranddad, has been something of a leftist internet celebrity since 2016, when he left the Bay Area to fight with the Kurdish Militia People Protection Units (PYG) in the Syrian Civil War. After returning, in 2018, he helped unionize San Francisco’s Anchor Steam brewery. Franczak, meanwhile, is a political commentator with over thirty-five thousand followers on Twitter; her writing has been published in media outlets like The Baffler and Deadspin.

Despite Belden and Franczak’s collective credits, and the fact that TrueAnon has over six thousand paying subscribers on Patreon, the event felt more punk than podcast. Tickets weren’t sold in advance because the hosts claim to have expected “around thirty people to show up.” Instead, the bar quickly reached capacity; an additional crowd of Epstein truthers huddled around the door, listening as best they could from the street.

At its most basic elements, TrueAnon combines two popular podcast genres: true crime and the Dirtbag Left. But instead of trying to determine the circumstances of Epstein’s death, TrueAnon, in Franczak’s words, uses Epstein’s life as “a lens for viewing how power operates in the United States and throughout the world: who has it, how they exercise it, etc.” As for the Dirtbag Left, it’s a broader ethos typified by the popular New York-based podcast Chapo Trap House, which signal-boosted TrueAnon’s first episode; Chapo co-host Amber A’Lee Frost is widely quoted describing the show’s approach as a style of class-based leftwing politics that “eschews civility-for-its-own-sake in favor of subversive, populist vulgarity.” Or, if you want the view from the mainstream, The Guardian summarizes the Dirtbag Left as “a coterie of underemployed and overly online millennials who were radicalized by the Iraq war and the 2008 financial crisis, have no time for the pieties of traditional political discourse, and place cautious hope in the movement to put the socialist senator Bernie Sanders in the White House.”

Not to be outdone by their East Coast peers, TrueAnon mixes the Dirtbag Left’s full-throated embrace of Sanders-style Democratic Socialism with the Bay Area’s history of radical politics. Where Chapo primarily targets the Democratic Party establishment that many believe screwed Sanders out of the nomination in 2016 — and, according to The New York Times, is willing to risk damaging the party if it means stopping Sanders from getting the nomination in 2020 — TrueAnon broadens its aim toward academia, the intelligence community, finance, the nonprofit industrial complex, and, of course, tech.

As residents across the Bay know all too well, the most-recent tech boom has raised the cost of living such that an average one-bedroom apartment in San Francisco now exceeds $4,000. San Francisco also has the most billionaires per capita of anywhere in the world, and the larger Bay Area has the highest income inequality in California, which goes some way to explain the endurance of class-based politics in the region almost ten years after Occupy Oakland. 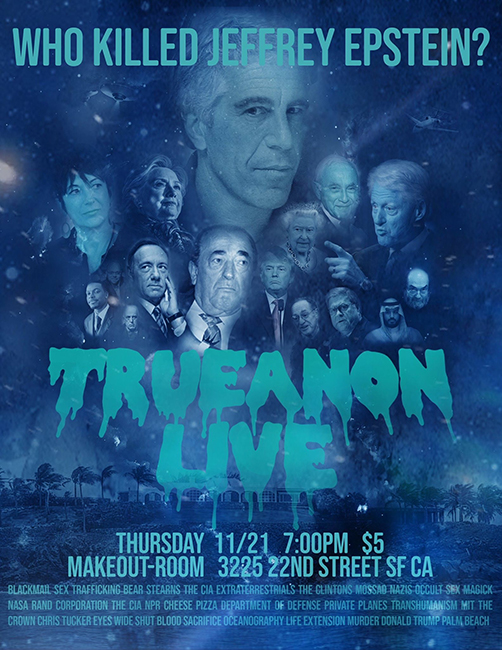 Given that tech now accounts for more than one out of every five jobs here, it tracks that even some folks at the TrueAnon live show funnel their surplus value to Silicon Valley’s ruling class. For those who didn’t leave the Make Out Room during the semi-ironic “lock her up” chant that rose at the first mention of Hilary Clinton’s alleged Epstein connections — and quickly dissipated as the audience seemingly thought better of the optics — the show provided an occasion for the sort of cross-class contact that can feel increasingly rare in economically stratified cities and culturally sanitized districts like the present-day Mission. Mentions of tech came with a friendly reminder audience members should probably citizen’s-arrest their bosses, eliciting a mixture of laughter and grimaces seemingly across job status. Jokes aside, it’s this call to a broader class-consciousness and anti-elite agitation that I find most exciting about TrueAnon’s crusade against the depravities of the .1%.

With a name evoking the notorious right-wing conspiracy group QAnon, it’s no surprise that TrueAnon has riled some in established progressive media outlets as much as it has excited Dirtbag listeners. Writing in a November 18 article in The Nation titled “Jeffrey Epstein Isn’t Going Away,” Jeet Heer acknowledges that Belden and Franczak offer a left perspective on “Epstein’s connections to the worlds of high politics (including the intelligence community) and stratospheric wealth,” but not before misspelling the podcast’s name and warning readers away from Epstein in favor of typical Democratic Party talking points. For Heer, and seemingly many other liberal commentators, any skepticism surrounding Epstein’s death will only prove “catnip for conspiracy theorists” and “an opening to the far right.”

The Epstein case is more or less all public knowledge, yet people use “conspiracy theory” to dismiss interest in it because it implicates high levels of power and government (as most conspiracy theories do). When I brought up the term with Belden and Franczak, Belden evoked the Marxist concept of historical materialism to pose the notion of “conspiracy fact.” “We have to take all the facts of the case that we do have […] and lay them out. Then we put the facts of the past next to them, and listen for echoes or maybe see connections that we hadn’t previously realized existed.” In contrast with QAnon, whose fanatical supporters have reportedly splintered into factions according to different conspiracy narratives, TrueAnon consistently stops short of asserting a fixed theory of Epstein’s death (or life). Instead, the podcast focuses listener attention on the power structures that produced Epstein in the first place — power structures that endure after his death, systematically exploiting the many on behalf of the few. As Belden reminds me, both he and Franczak have ideas of “what, exactly, Jeffrey Epstein was up to, but [they] try not to arrive at any conclusions without lining up evidence first.”

Back at the Make Out Room, the multimedia element of the live show neatly modeled this approach — mildly anticlimactic for a terror production. The night was organized around a slide deck of the main conspiracy facts to date, featuring some of the Epstein network’s most notable figures, including: Prince “Randy Andy” of the British royal family; “Donnie Deals” Trump; the so-called “Clinton Crime Family”; American actor Kevin Spacey, whose accusers keep turning up dead; and Ghislaine Maxwell, Epstein’s former girlfriend, alleged coconspirator, and daughter of British press baron and rumored Israeli spy Robert Maxwell, who himself died under suspicious circumstances in 1991.

Audience members with full-blown Epstein Brain were already familiar with this cast of characters, so for us the terror came down to the set design. Stage right was a producer’s booth resembling a high school theatrical reproduction of the temple-like building found on Epstein’s Little St. James Island; stage left, a large replica print of Bill Clinton — whose name, according to files obtained by Gawker in 2015, appears at least a dozen times in Epstein’s flight logs for the aptly nicknamed “Lolita Express” — eerily pointing toward the crowd while wearing, what else, a blue dress. The original painting was reportedly found in Epstein’s Manhattan estate.

Podcasts are generally a solitary affair — you pop in your earphones, press play, and wash dishes, work your office job, whatever — so I didn’t really think about the materialization of TrueAnon in the city space until it happened. Waiting in line just blocks away from the site that I credit with my own political awakening — a Valencia Street coffee shop where I worked after moving to the Bay Area with a newly-minted graduate degree, making $13 an hour to serve coffee and handle multiple American Express black cards a week — I talked to people I’d never met. Our conversations organically turned from the podcast to local politics: the slumlords who own our apartments, tenant unions, and mixed feelings about our respective DSA memberships.

Some attendees probably work at the tech companies that concentrate so much wealth here, while the rest of us are hanging on in publishing, nonprofits, or service. At the end of the day we all sell our labor to someone else, which we seemed to agree upon as a line of solidarity for the night. That, and sitting through a two-hour live investigation of people with more wealth that any of us could ever imagine, made for a decent start toward something more.