A Letter From the Future for Artists 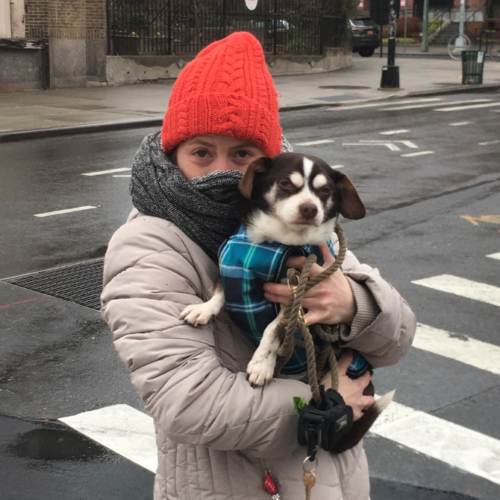 Dear artists, writers, performers, and all you people who make things.

I know this is a lot of information, so please bear with me.

I am writing to you from the future in New York where the COVID-19 virus has hit hard and will continue spreading — so our present is your future.

There’s a lot of misinformation out there and officials here were slow to act but they were faster than in most other cities, especially those led by right wing and religious leaders who claimed the virus was a plot against the President, which is obviously not true. The virus halts for no one and politics, gender, race or religion offer no protection against it.

That said, what’s happening to us here will be happening to you in the days and weeks ahead and I wanted to give you a heads up as to what’s coming your way and what to expect. Wherever you are at, it’s likely some of your politicians will avoid blame, obfuscate and deflect responsibility because of their incompetence.

It’s also just as likely some will step up and lead, doing the work it takes to save lives. I’ll also share with you some real numbers so you have a sense of the scale we are dealing with in this state.

The art community here, as it is everywhere, is especially vulnerable because of how social we/it is/are. Those who are older and ill are even more so.  We must be vigilant and look out for our elders – because our community relies on them for guidance and wisdom and perspective.

Some people seem to think COVID-19 is like a cold or flu — but it’s much, much worse and the mortality rate is about ten times that of a bad flu. People with compromised immune systems are at greatest risk. A world in which all of our older artists, poets, authors, painters, performers, and musicians succumb to this illness is not a world I, nor you, want to imagine.

As a community, we’ve already lost countless talented people to another virus — HIV, during the AIDS epidemic. This time though, we have a fighting chance.

If you know anyone on the fence about staying indoors, be encouraging about the extra work they can get done, the projects they’ve put off or the binge watching they’ve never had the time for.

New York has learned the hard way that many people are either oblivious or willfully ignorant to all the warnings about staying in and keeping away from others outside. The virus does not always manifest symptoms so it’s entirely possible one could simply spread it to many people without realizing you have it.

So please use common sense, become informed and above all, call out ignorance when you see it because it risks all of our lives. The art community in this country does not need to lose another generation to a virus.

SOME CRAZY NUMBERS IN NEW YORK

New York City’s current population is about 8.5 million people. The governor’s office has determined that, based on the statistical models they are working with (and informed by what has happened in other locations) that within nine to twelve months 40-80% of people in NYC will test positive for the COVID-19 virus. That seems to be the overall assumption.

Given that knowledge, the state and city’s goal is to keep the mortality rate as low as possible. This means sheltering in place, closing businesses, not going out in general and avoiding gatherings – because just one infected person can spread it to potentially hundreds of people in a single day. But if an infected person stays home, obviously they will not spread it.

With a 40% infection rate (3.6 million people) the mortality rate has been at .5%, would will result in eighteen thousand deaths. But if people ignored the quarantine and social distancing rules the mortality rate could be correspondingly MUCH HGHER — as high as 3%. So on the other end of the projection — imagine an 80% infection rate combined with a 3% mortality rate. That would mean (7.2 million people) and 216,000 deaths — and that’s just in New York City. The Public Advocate added that the assumption is that in a state of twenty million people they’d expect the statewide count would be double – for a total of about 432,000 deaths.

Clearly, it’s worth avoiding half a million deaths in New York, and in your city. And likewise, it’s a shame if people listen to the likes of anti-science and religious leaders spreading discord and outright lying to the public.

Right wing media and the Federal Government are promoting anti-science views and endangering millions of peoples’ lives. It’s shameful and dangerous for public officials to encourage people to continue on as if nothing was happening. It makes it harder for actual competent professionals to do their work. Think of all the courageous medical workers, people at food banks and the ordinary people who are helping others and risking exposure to help their neighbors.

The last thing we want is for people to die out of ignorance or negligence, especially our elderly and ill, who, as a society, we are supposed to protect.

What is done here will demonstrate whether or not certain things work. Watch what is happening here and learn from us.

One last sobering fact – over the past two weeks COVID-19 has, has claimed more lives in New York City than homicides did all of last year. 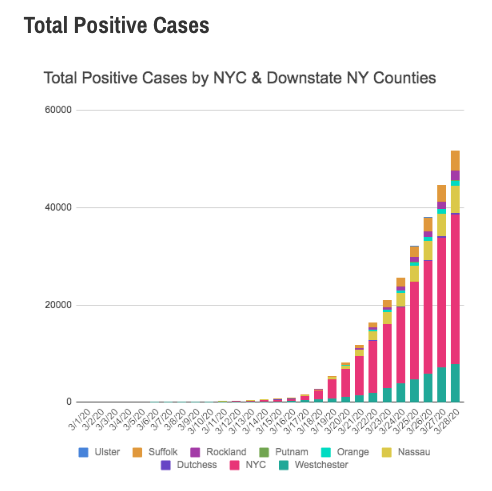 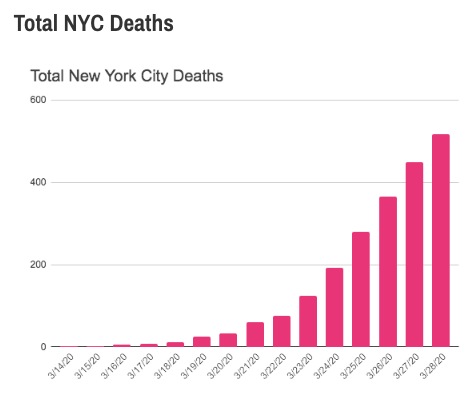