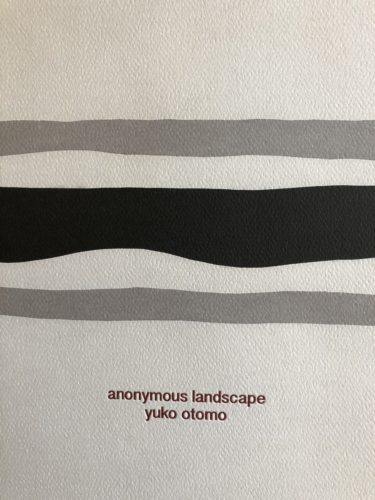 Our world is a jumble of names. To the proper names for people, places, and things are added a dizzying cacophony of brand names coined solely to capture our every desire and even our very identity. We wander through a “forest of symbols” that instills in us a constant state of distraction.

What would happen if, for a moment, we could peel away the thick layer of naming affixed to every surface and see the world as it is, sans appellation? Poet Yuko Otomo supplies one answer to this question in Anonymous Landscape (Lithic Press, 2019). A lyric, philosophical poem in two-hundred numbered parts, Anonymous Landscape is also a record of daily life during a sojourn in Paris. Each day the poet meditates on the sights and sounds of the city, while never forgetting to contest the impulse to name. Along the way, the practice of unnaming produces a new depth of feeling for being in the world.

An interesting outcome of the process of dispensing with names is that subject/object boundaries begin to break down. What’s more, the exercise of unnaming reveals the arbitrariness of names, their essential emptiness.

13.
let me open the window // let me look at the tree / reaching to the sky / as tall as the top floor balcony / I stand on // let me forget it’s called “a tree” / let me forget the noun/name we’ve assigned to it / to carry itself along with // let me remind me of the fact / that I breathe the same air/light with it // let me realize it’s me

In her quest for anonymity, the poet would like to escape the confines of being an objective entity, “a noun.” She identifies instead with action; she wishes to become a verb. Perhaps paradoxically, the key to becoming a verb seems to be to slow down, to unhook the reactive mind, and to observe existence without comment. 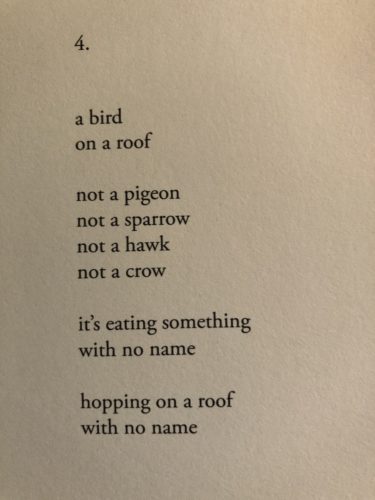 Without the objectification implicit in naming and being named, the poet is free to participate with others in political action. There she finds a positive value for anonymity.

70.
three weeks of rain clear up for the day of “Liberté! Egalité! Fraternité!” people gather together on a massive level without knowing each other. We recognize only a few faces in a pool of humanity. here, we accept each other’s anonymity as a complete norm.

While definitely engagé, she is no naïf. The horror of revolution strikes her on a visceral level, well below the level of names.

74.
it’s horrifyingly fascinating to re-imagine the revolution that took place at the height of summer. blood & corpses turned into a souvenir, a reminder of the foul reality of our anonymous physical existence. // I see, smell & hear.

Meanwhile, daily life revolves around work, whether domestic or job-related. Otomo sees work as a self-canceling activity that affords working people the clarity and illumination of anonymity.

When she trains her sites on power relations in so-called Western democracies, she finds that, unlike either repetitive work or street demonstrations, electoral politics is all about naming. Here the popular will boils down, first to a few names, then only one.

99.
[…] a population of millions / casts votes for one name or the other / to decide the future of the country // democracy or fascism // people shout names / of their favorite leaders / with two emotional extremes: / LOVE & HATE // at the end / everything falls / on the name // chosen

Names are persistent. Ultimately, there’s no getting away from them. But while exploring the ontological landscape of anonymity, Otomo concludes that, however necessary for survival, names can never exhaust the fantastic multifariousness of being. She proves this with a big, fat paragraph detailing every person, place, and thing she sees on a sunny Sunday in Paris. On reflection she concludes that humanity is essentially nameless.

134.
on a glorious day of the Sun // I see many things – // an old woman who reminds me of my mother because of the way she dresses in accordance with the colors of the season’s delicate feminineness; babies in baby carts; parents pushing them; magnificent street performers & their spectacles; [etc., etc., etc., a whole page of animated observations follows, then…] // I see a shared anonymity / without detailed particulars // on a glorious day of the Sun, in May // we are all nameless cosmic dust

Where individuals co-habit, conflict is inevitable. Familiarity breeds contempt, as the saying goes. We know each other all too well. The poet quarrels with her lover and observes her own and others’ quarrels philosophically.

Later, the two lovers achieve a few moments of perfect rest on a park bench in silence.

I get a Zen take on Otomo’s poem. The “self-voiding clarity” she observes as a benefit of doing any kind of work reminds me of Zen master and poet Dōgen’s oft-repeated lines: “To study the Buddha Way is to study the self. To study the self is to forget the self. To forget the self is to awaken with the ten thousand things.” It is perhaps no coincidence that Dōgen associated Zen practice with practical chores such as cooking and sweeping the floor. 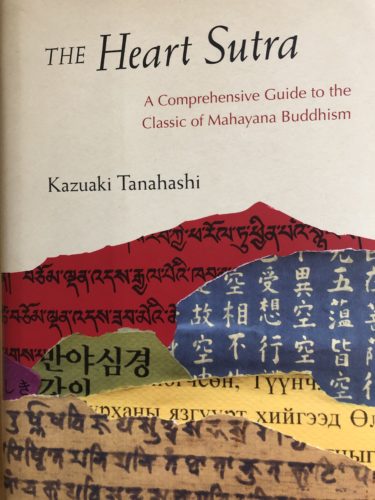 It also strikes me that “anonymity,” as she uses it, bears a resemblance to the notion of “emptiness,” as introduced in the Mahayana Buddhist classic The Heart Sutra: “Form is emptiness; emptiness is form.” I have pondered this deeply enigmatic statement to no end. In his 2014 translation of the The Heart Sutra, Kazuaki Tanahashi renders the line this way: “Form is boundlessness; boundlessness is form.” The sense here seems to shift from something like “no content” to something like “no edge.” Either way there is a collapse of duality between form and its (false) opposite. As a bow to Otomo, one could substitute “namelessness.” Thus might our eyes be opened to the fundamental namelessness of form.

I think too of Heidegger’s distinction between the ontological and the ontic. The latter is the world of beings, or things in relation. Here naming comes into play, as names, both common and proper, distinguish objects and define their relations. Ontology is the study of being itself. To consider being, we must enter the realm of namelessness. This is how Yuko Otomo welcomes us into her Anonymous Landscape.

I hesitate to introduce the name of Heidegger for obvious reasons. His concept of being is all too wedded to notions of blood and soil. My intention, though, is simply to use Heideggerian categories as critical tools in an analysis of what I consider to be Otomo’s liberatory poetics.

Paris, “capital of the nineteenth century,” is a city where, at every turn, history is staring you in the face. Boulevards, streets, alleyways, churches, parks, monuments, buildings of every period and style, all bear names from a proud history of imperial power. What a strange place, then, for a Japanese poet from New York to conceive of a landscape of anonymity.

Yet there is something perfectly liberating in this strange conception. As another visitor to Paris, the Martinican psychiatrist Frantz Fanon, wrote seventy years ago in his first book Black Skin, White Masks:

I am not a prisoner of History. I must not look for the meaning of my destiny in that direction.
I must constantly remind myself that the real leap consists of introducing invention into life.
In the world I am heading for, I am endlessly creating myself. […]
At the end of this book we would like the reader to feel with us the open dimension of every consciousness.

The feeling for freedom evoked in Fanon’s impassioned writing bears a family resemblance to the feeling I get from Otomo’s Anonymous Landscape. It is a feeling of openness to present and future possibilities, alive from moment to moment. 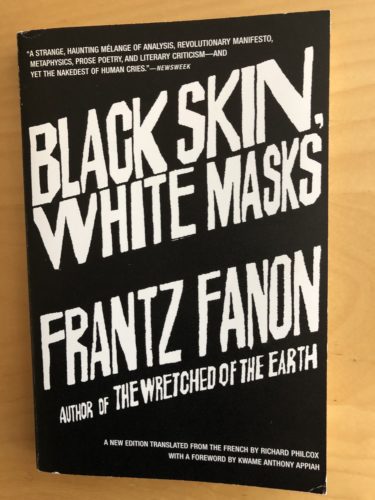