I’m in Downtown LA, checking into my hotel, the Millennium Biltmore, which I would describe as Old-Hollywood glamorous; it’s upscale, but certainly dated — colonialist vibes and all — and inconspicuously coming apart at the seams. I’m here to conduct and film an interview with the artist Suzanne Lacy, who is based in LA. I’m here at the Biltmore because I’d rather stay at a historic hotel than any of the boutique hipster hotels popping up.

Lying on my chaise (yes, my room has a chaise) I have this feeling that I almost always get in hotels, like, “something happened here…” Indulging my curiosity, I do some basic research on the hotel and am both dismayed and a tiny bit thrilled to discover that the Biltmore was the last place that Elizabeth Short, victim of the horrendous “Black Dahlia” murder, was ever seen. For once, my intuition was right. The lobby of the Millennium Biltmore hotel. Photo: Erin Fleming.

In any case, I am here for a reason, and that reason is to conduct an artist interview for SFMOMA. Interviewing artists in their studios is one of my most cherished work responsibilities. It can feel incredibly intimate, even a little sacred, being given access to an artist’s studio. It’s their home base — the place where ideas are formed, where materials live, where artworks are realized. My team has travelled everywhere from New York to Tokyo to Düsseldorf to capture artists in their studios. We are so obsessed with the idea of the artist’s studio that we even created a web series called Artist Cribs that exists solely to give audiences a glimpse into these creative, evocative hubs.

When I was assigned to interview the social practice artist Suzanne Lacy in advance of We Are Here, I had an early sense that filming her in her “personal environment” would be different. Suzanne works outside of galleries, studios, and other traditional art spaces; she has organized performances at bullfighting rings, police stations, parking lots, on beaches and stoops all around the world. A phone call confirmed that she doesn’t, in fact, even have a permanent “studio.”

“Well, that’s unfortunate,” I thought. It makes for a more compelling story if I can film an artist in their space to see, you know, the very particular way they stack huge slabs of wood, their abstruse system for cataloging their archives, the poems and magazine tear-outs they’ve pinned to a wall, or how their cat sometimes walks in and brushes its tail against a sculpture. Mundane tasks become exciting and magical when one imagines them happening in the studio.

But really, the world is Suzanne Lacy’s studio. To reflect this, my team and I decided to interview her on a rooftop in the Fashion District of LA; the Downtown skyline served as backdrop. In lieu of a traditional “studio tour,” we asked Suzanne to show us around LA’s City Hall and the nearby LAPD central office, the sites of her seminal works In Mourning and In Rage and Three Weeks in May (both 1977, the former with Leslie Labowitz). 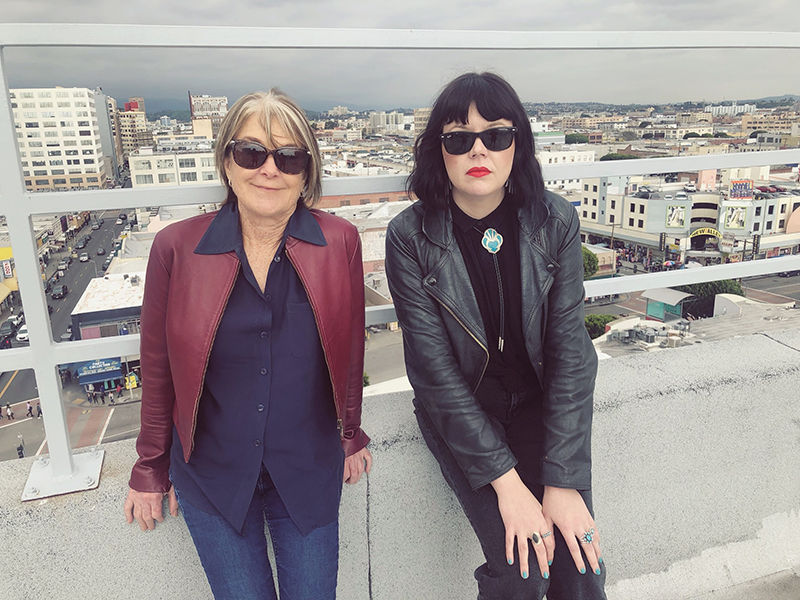 The author and Suzanne Lacy, on the set of our shoot in downtown LA, March 2019.

Suzanne generously drove me around to the sites; it was enthralling to be in the exact spots where In Mourning and In Rage took place forty-plus years ago.

Left: Suzanne Lacy on the steps of Los Angeles City Hall for the work In Mourning and In Rage in 1977; Right: Suzanne at the same site, for interview with SFMOMA in 2019.

After wrapping our rooftop interview, she asked me where I was staying in Los Angeles. Rather inelegantly, I replied, “This hotel called the Millennium Biltmore. It has decadence and decay and a secret indoor swimming pool!” Casually, Suzanne responded, “Oh, that was the site of my work, Inevitable Associations.” I’m sorry, what? I had been so steeped in researching Suzanne, I remembered everything about Inevitable Associations — except for, I guess, its location.

Inevitable Associations was inspired by a newspaper article announcing the renovation of the Millennium Biltmore Hotel in 1976. The article compared the hotel to an aging woman, (going so far as to describe the building as “the good old girl” and a “dowager”) in desperate need of a “face-lift.” 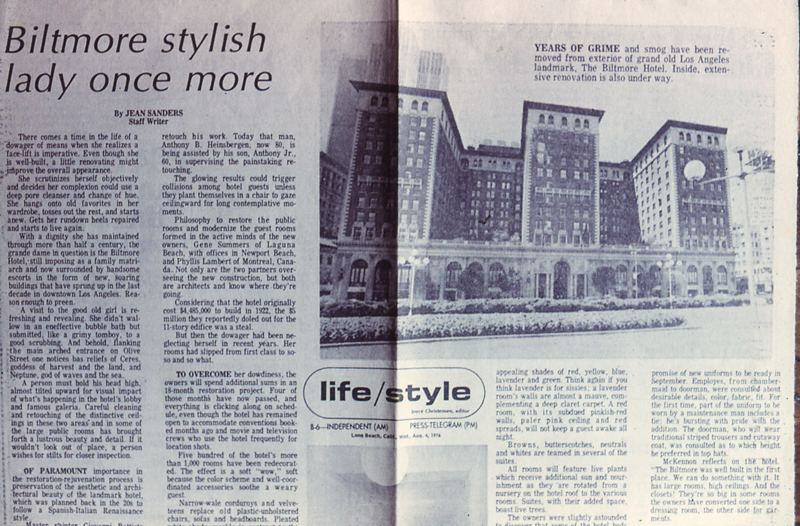 Suzanne had a makeup artist temporarily “age” her with makeup and prosthetics as part of a daylong performance. She also gave three women over sixty a platform to offer their thoughts on aging. Inevitable Associations deals with themes of transformation — both outside perspectives on how women “transform” over time, and the actual lived experiences of these women. 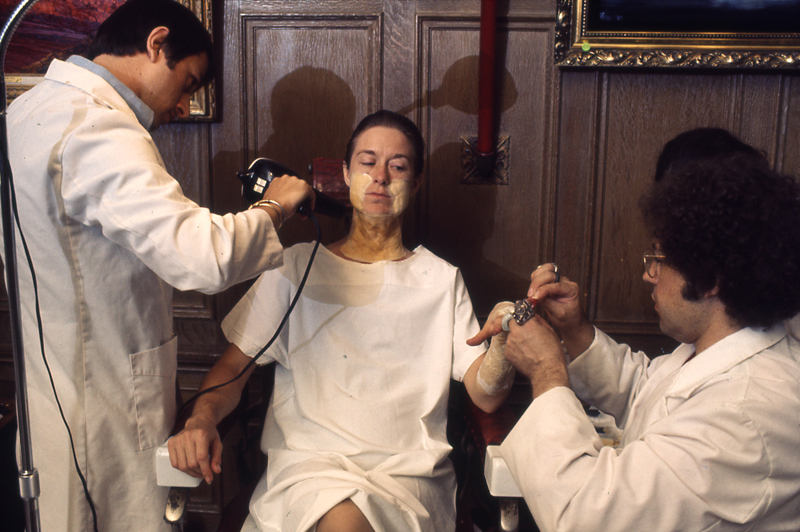 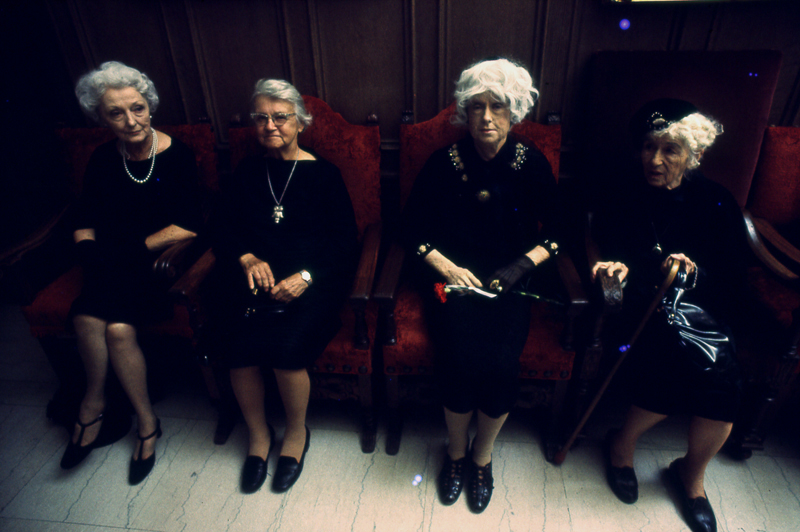 So how did I book myself a room at the site of this work, and not realize it? It doesn’t really matter: this revelation was an absolute delight. I had unwittingly slept on location at a brilliant Suzanne Lacy performance that took place forty years ago; this was so much better than having access to a studio. I returned to the Biltmore that night with a renewed energy and curiosity. I stared at photos from Inevitable Associations and imagined where exactly those moments were staged. I looked at fellow hotel guests and wanted to whisper, “Right there! You’re pretty much standing right where Suzanne had the makeup station set up! How interesting for you and you don’t even realize it!”

Secret histories and invisible resonances are all around us. A fight between lovers, a phone call to an old friend, a lonely night with room service and an Antiques Roadshow marathon on TV: deeply personal moments hidden behind walls. They aren’t so different from the scenarios that captivate me when thinking about an artist’s studio, really.

For women, however, these histories are often violent and disturbing. Most remain uncovered. And the ones that we do hear about (like the lurid murder of Elizabeth Short, a conventionally attractive young white woman) don’t come close to the whole story of place.

What Suzanne does is deliberately public: she creates highly visible, communal events that leave intangible marks on places, embedding sites with new histories and memories. And while her work frequently deals with the dark realities of women’s lives, the marks she leaves feel positive to me: made by and for women, in a sense they reclaim spaces by overlaying them with alternative ideas and narratives. In doing so, she augments the “invisible resonances” experienced by those willing to make space to feel, opening up possibilities for that sometimes magical, sometimes unnerving feeling:  “something happened here…”