Diary of a Bookseller 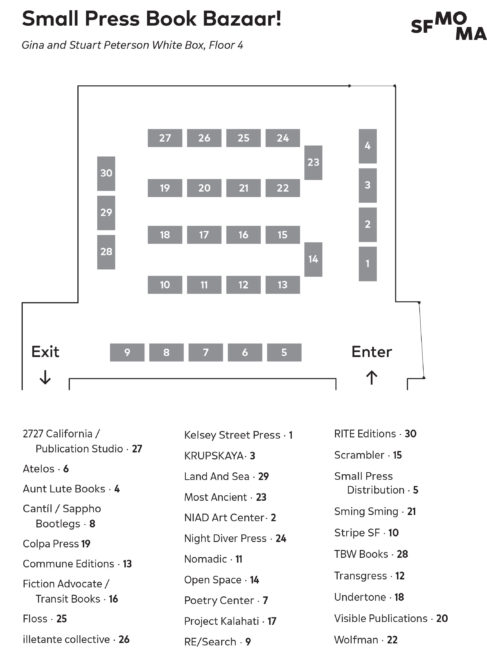 On December 8, 2019, SFMOMA’s Open Space, Education and Public Practice, and the Library & Archives teamed up with community partners The Black Aesthetic, Cantíl, Colpa Press, The Poetry Center, and Small Press Distribution to present the museum’s first ever Small Press Book Bazaar! The event, held on a day when admission to the museum was free of charge, also marked the opening of the exhibition Printed Publics: Contemporary Art and Design Publishing in the Bay Area in the Koret Education Center. Rather than ask Noah to respond directly to the bazaar, we invited him to offer thoughts on the Bay Area publishing landscape. —Eds.

At Moe’s, Jerry and I play house classics. I’ve been trying to track down a copy of E. Lynn Harris’s Freedom in This Village for Jerry’s “Poem About Kenny/Portrait of a Hard Rock.” The phone rings, I put someone on hold. A flurry. I’m alone.

It’s the anniversary of the Ghost Ship fire. I’m at a loss for words. Cherushii’s “Nightsteps.” Far away, so close.

The person on the phone has hung up, more students need Donna de la Perrière’s Works of Love & Terror, Kevin’s blurb so true. Niedecker, an orchestration, of sound.

I reach out to Zoe Tuck, Sam Ace, a Northampton contingent, for this next issue of Baest, the fourth, looking for queer work that hits in all the right places.

A bump at the base of a finger. Tendon or cyst.

Emails go out, they come in. Hear from Gordon on behalf of the organization, an invitation. Been a minute since I’d seen him at a reading, at the bar before or after. Last might’ve been across from Wolfman, with Evan Kennedy, we talked about Bruce Boone, the manuscripts.

I talk to Evan about Bruce, knowing I should talk to Bruce myself (I will), but there’s something about an intermediary that gets me, the expansion of a love through another body interloped into a relationship somehow more and less personal. Besides, their friendship is beautiful.

A stack of Raddle Moons Owen and I bought from Kathleen Fraser’s library; the Lissa Wolsak over the counter, someone’s selling Canadiana.

The thought that a West Coast scene could traverse false borders, negate them, more of this, all of this. The possibility of community across difference, be it nations or neighborhoods, along the same or similar waters. The remnants of a Vancouver — Bay Area relationship, what could be so much more. The wind roars a power rare.

How comfortable I am reading Bay Area poets in Canadian journals, the focus on experimental women’s writing over shared locale, Jean Day and Juliana Spahr touching Susan Clark, Lyn Hejinian, Leslie Scalapino, Norma Cole with Catriona Strang, Lisa Robertson. If Angus moves back it could start up, again, different, of course, but over foundation, storied.

At Kathleen’s I found a drawing of Bob Glück’s dated 5/7/73, a butterfly of an apple, a stem of almost fiddleheads : 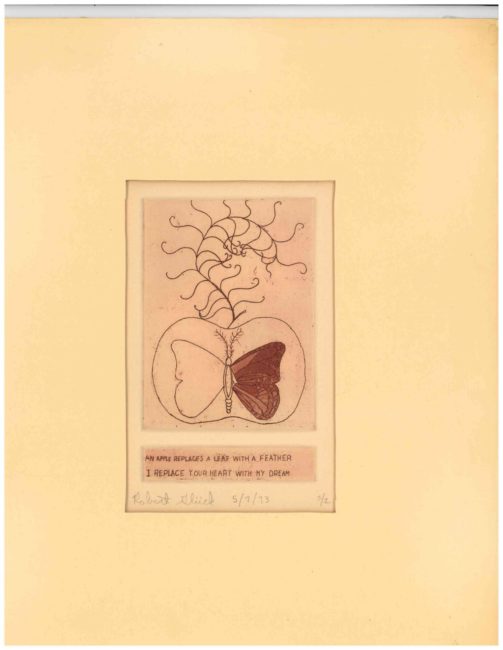 My heart in my dream makes things for my friends to keep.

Invested in a kind of inheritance, a lineage, the navigation of a history of spaces, writers, bodies breathing over the same books across a span of time, in the same space, sometimes.

I talk to Owen about which cafes he and other poets made their own. Where to make pilgrimage, where Spicer drank, where Lamantia held court. Owen was never as popular as either, so he claims.

Tonight we release two new books by queer men lost to the AIDS Crisis: Jamie Townsend‘s wonderful Beautiful Aliens: A Steve Abbott Reader and Jim Cory’s The Castro Poems of Karl Tierney. A Castro I can only know through poems.

In the basement, at the mic, Jamie reads from their introduction to Steve’s work, nodding to Aaron Shurin’s essay “Narrativity,” Aaron’s “simultaneity of times.” Is this not making plans for breakfast over stacks of Kathleen’s books in the poetry section, her Tuumbas, Post-Apollos, over the archive of her own friendships, inscriptions from Etel Adnan, Clark Coolidge, David Bromige? Show the poets the cart, give big hugs all around.

Eric Sneathen and I talk about the need for a Bay Area queer press. I think it’s something we could do with Lindsay Choi, we’ll be starting with chapbooks soon anyway. It’s a little jump from sewing to perfect binding, right?

A publishing ethos of care, doing things with those we hold dear, work we love, people we keep close in a different kind of way, touching them through the word.

I show Trisha my bump. Says I should go to a doctor. I should.

Vi Khi Nao sends a series of Sapphic fruit drawings for this chapbook with Sophia Dahlin. Drawn fruits astound in penned dresses, suits, smocks, in pairs, kissing, embracing, the pits facing each other, a strawberry stuffed deep in the meat of a kiwi, pomegranate lover, something tender in their relations, skins soft, seeds ready to seed.

The dealer asks what I got. Calls me “so post-post-modern.” Absurd, but relief at not being read as Metamodern. Is that still a thing?

I make Open Space a book, I’ll scan it tomorrow.

More cops on Telegraph, every day the war on houseless folk grows a new digit. There was the triangle, then the trash cans, now they say you can’t smoke on the avenue.

Printing with Kalie at 2727 California Street, on the machines inherited from Colter Jacobsen when he ran Publication Studio.

To think of the lives of the machines, what they’ve printed, when and where (Kevin? Dodie?). Image of someone driving the perfect binder, the guillotine, across the Bay Bridge.

Flipbooks require a tangible navigation of the page, the perfect thickness of paper. Anywhere between 176 and 199 gsm provides the perfect “flipability,” as Kalie finds.

A bump at the spine. Glue. Paper, a jam.

The book bound — thanks Calvin and Lexi — we disband. It’s what we want the book to do. 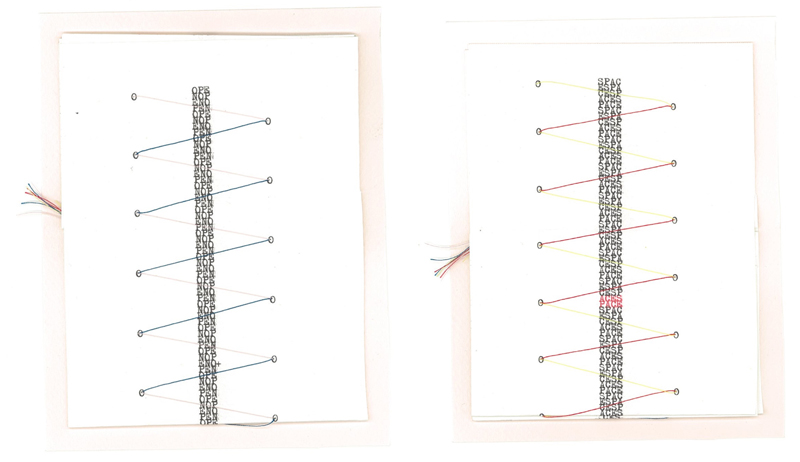 The fair is on, I’m working, I’d meant to be there, but there’s always another. A co-worker in Portland, the holiday season upon us, I wrap seven books for the same man.

The first of its kind at SFMOMA, something new, see the spread of booths, of relations, networks strung across water, spaces of the Bay, those seen elsewhere, now in the museum. My co-worker’s zine — published anonymously, of taco trucks visited — at one side, calendars freshly spiral bound along another path, the folks who did Trisha’s book cover, as always V. Vale, my friends tabling where they usually do, with the same cloths, same chairs, same signs, enticing passersby with hot merch, fresh finds, new work, something fun, intimate, clever, necessary. 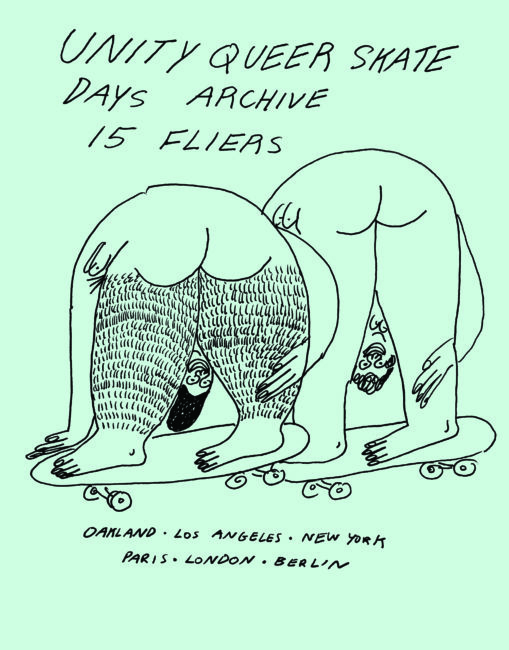 In my mind’s eye, all the Jeffrey Cheung prints I’ve bought at fairs over the seasons: to be one of those figures, in relation to others, usually two or three or more, with limbs flung wide, maybe hairy, exposed bottom, a wide smile, vulnerable sure, but unperturbed, together, my look for these kinds of things.

I’m convinced Aram Saroyan’s The Street: An Autobiographical Novel is the predecessor to autofiction, could almost even, want to be New Narrative, but lacks the theory. Regardless, too straight. He’s invested in space as much as gossip, claims it’s a thing of the ’60s. I’d argue it’s more relevant, in different ways.

Claire gives Spenser broadsides of an Andrea Abi-Karam poem from Baest to take home for me. 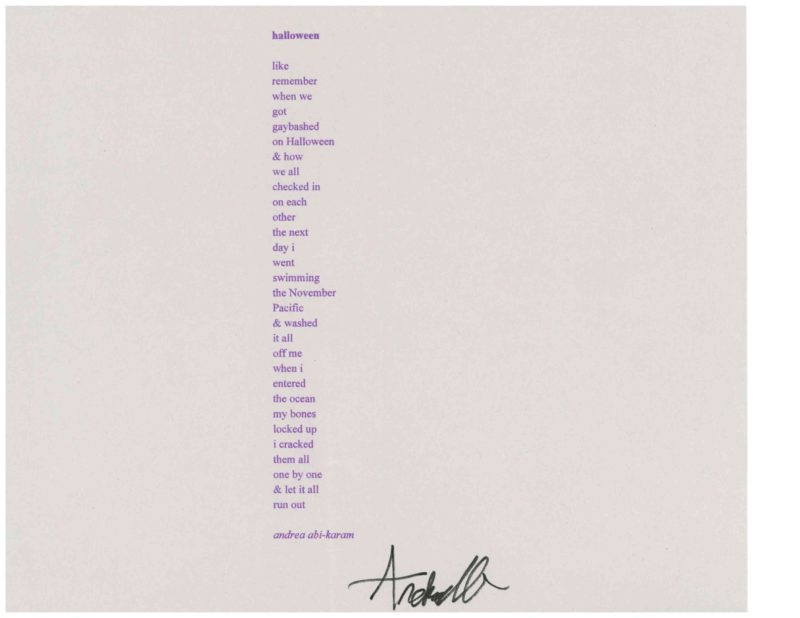 Spenser texts a picture holding my flipbook over a small pile of my typewriter books.

I’m not there but I’m there.

I’m not doing anything new, it’s all in the books — in the printing of them, the reading of them, in the spaces we share, spaces others have inhabited, for longer, or still, with us, or not.

I’m not doing anything new, maybe adding a layer of someday sediment, a blip to the landscape we’ve been working on, living in, something with the people I love, who are here with me, who aren’t here but still with me, something small but necessary. What can we do, what we can do.