The Chromatics of Play

Blackface killed the silent movie. That is to say, Alan Crosland’s The Jazz Singer (1927), the first feature-length movie with a synchronized music score and singing and speaking, ushered in the ascendance of the talking picture. I feel a contemptuous pity for people straitjacketed by whiteness: people whose only conception of kinship and love and joy and power is permanently affixed to the necrotic rot of white supremacy. The kind of popularity blackface and minstrel shows enjoyed demands an armchair diagnosis. It’s the same pathology embodied by images of the very lynchings that were turned into pleasant afternoon family affairs. Gangrene requires dramatic medical intervention; amputation might be more fitting here than maggot therapy. The minstrel show is an atrocity image; its king, Al Jolson, was, for a spell, one of this country’s most famous and highest-paid entertainers. The voice of a generation, of a nation. 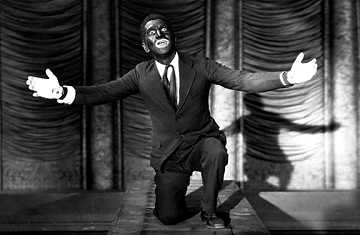 You can call me Al (Jolson)! 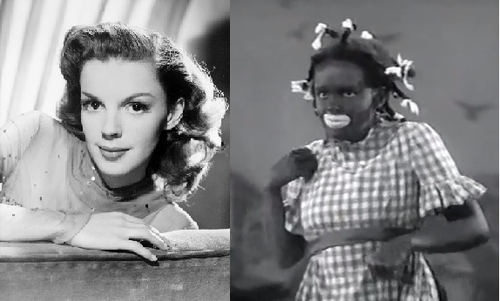 Judy Garland in Everybody Sing (1938); The Wizard of Oz would come out the following year. America’s sweetheart, indeed.

Working backwards, the function of Eurocentric minimalism is one of environmental control and containment. A “great white interior” within a home (or, let’s say, the carceral white cube) is one that has been purged and bleached; the things within the interior have been “approved, trained, disciplined, marshaled.” 1 It is a voiding artifice wherein “behind virtue lurks terror; beneath purity, annihilation or death. Not death in the sense of a life ended, but a glimpse of death-in-life: the annihilation of every cherished belief and system, every hope and desire, every known point of orientation, every illusion.” 2 Blackface works in the inverse: it is a marking of oneself like the other in order to demonstrate the power held by man over nature and animality because “color here connotes the slightly wild.” 3 Whiteness is order and color is chaos, and minstrelsy — a performance rather than an image of atrocity — is an art and entertainment form born out of a desperate mimicry.

The fullness of whiteness exists in the stepping into the color of another/the Other (see also: “blackfishing,” “digital blackface,” and Rap Genius, the entire purpose of which is more or less to translate Black music for white audiences). Pleasure is derived from this treachery, yes; but the ordered purity that elevates whiteness is actually voiding and stifling for white people — blackface/Blackness represents a perverse freedom acquired through a fall or descent into sub/inhumanity. Whiteness is not simply a sadistic structure producing a pleasurable and humiliating cruelty in abundance, it is an expression of deprivation. Because of a cultural and ontological voidedness (whiteness exists most notably through negation, i.e. what it is not — i.e. colored, alien, unassimilable — as opposed to any clearly positive articulation; it is like a shape-shifting Frankenstein monster), white people are confined in their expression. Blackface is an embodiment-performance of an otherwise unattainable and inaccessible life-making.

Beyond Middle Ages symbolism of all black costuming signifying the “costumes of Satan, his fallen angels, and the souls of the damned,” minstrelsy is caricature or visual polemic. And the caricature illustrates and exaggerates parts of the body “to deride or denounce a moral blemish through a physical one.” 4 The minstrel shows emphasize blackness as social-metaphysical-ontological blemish that demands correction and regulation — blackness is necessarily deserving of derision. The visible blemish of Black people, of course, was the epidermal marking, a reminder of Ham’s cursing by Noah. The color black absorbs all light (life), while the color white reflects all light and absorbs no light (life). “The freest man on the planet is a white man in a drum circle,” Ruth Gebreyesus said to me a couple of weeks ago as she described the kind of white person who doesn’t feel obliged to keep their Air Force Ones clean. [Techni]color is used cinematically to visualize the transition of someone falling from grace, drug intoxication, or something lurid or sensuous. 5

The chromatic opposite of the blackface minstrel — a performance and grasping at white life-making — is Jason Voorhees. He’s a product of vengeful white violence, a white man born out of the violent actions of his mother. Per his creator Victor Miller: “I still believe that the best part of my screenplay was the fact that a mother figure was the serial killer — working from a horribly twisted desire to avenge the senseless death of her son, Jason. Jason was dead from the very beginning. He was a victim not a villain.” There’s a quintessential whiteness to Jason, a figure whose villainy resides in some text of disempowerment and victimization. It feels akin to the sympathetic descriptions of the phenomenon surrounding the rise of Trump: that it is not enthusiastic (even gleeful) racism but an unequivocal “economic anxiety” that drives his base. Sean S. Cunningham, the director of Friday the 13th, said that Jason is “like a great white shark. You can’t really defeat him. All you can hope for is to survive.” It’s probably worth making a note here about great white sharks: that we can partially attribute a shift in their migratory and feeding patterns to the common practice of white slavers throwing overboard the enslaved Africans trafficked across the sharks’ Atlantic Ocean habitat. 6

In Interaction of Color, Josef Albers introduces the “haptic sense” 7 which one could extrapolate into the space of corporality and racialized (colored) performance. His is the idea of a distance that separates the seeing and the interpretation of the thing just seen; here it is the internalization of and physical-physiological response to blackface, what we might describe as flesh memory drawing from Hortense Spillers’ coinage of “flesh.” 8 Maybe it’s also a response to color that can be examined by the activation of racial cartographies inscribed onto the body through another performance of race — kink.

I spent a short time romantically entangled with a very skilled and careful/care-full dom this past summer, a white man. In preparation for our play, I read a bunch of different books and articles about bottoming. Something that the (almost entirely white) authors of all these books don’t teach you is that, often, the prospect of power “exchange” is the fantasy in itself and not the scene: they don’t entertain the idea that exchange might be untenable even with successful negotiation. I consented enthusiastically to the light flogging that left my breasts dappled with beautiful purple bruises, but the specter of chattel slavery was always present. 9 My relinquishment of whatever contextual power I possessed was always plagued with the question of just how much of this was kink fantasy and how much of it was a contained externalization of real life fantasy (and whether these things could actually be compartmentalized). I guess that’s the point. The sexual imaginary within which BDSM is broadly situated is a chromophobic one: it does not organically acknowledge the possibility of the pleasure or interiorities of Black people beyond their instrumentalization in and into white scripts. Within this imaginary, non-whiteness is positioned as accessory or functional tool — the big Black cock (sometimes the stud who fucks the white cuck’s white woman), the Black slave or dominatrix — but rarely as complete human agents. The images of these kinky power exchanges are overwhelmingly white, characterizing an already intimidating sexual exercise as an even less accessible space for the assertion of agency of non-white people. “Black” always precludes humanness.

White doms can consent and play with Black subs, of course. But play is intended to be fantasy, and what really is a fantasy animated by and mirroring material reality? I’m hard pressed to think of a readily accessible conception of power for white people to tap into outside of the ubiquity of white supremacy. So while I was blindfolded in sub space drinking in the tickling sharpness of the Wartenberg wheel or absorbing blows to my ass, what kind of dom space was _______ inhabiting? He stopped immediately when I said that I felt weak or tired. He patiently held me once when after a scene I, feeling a particularly overwhelming surge of serotonin and god knows what else, began to sob. But did he have any real understanding of my pain? Do any of them? Whiteness necessitates an underestimation and understatement of Black pain 10, and so if white supremacy dictates a total absence of Black interiority what is the ontological text for our pairing? Isn’t sadism about deriving a [sexualized] pleasure in the pain of others? I was being spanked by a deft hand that seemed to observe and predict and respond to my physical needs better than I could. But even as he knows I can feel pain but does he know I feel pain (that I am wounded)? And because I know the answer is “no,” then why did I come back?