Last week I sat on a panel at the University of Chicago with the musician Ben Lamar Gay and visual artist Delano Dunn. Three Black Artists discussing black holes, and Dunn posited that perhaps the black hole was a Black invention. Perhaps it was left there by Black folks from the future and if we can get to it we get to live in a world with no disparity, no stratification. Maybe all the other Black people — the true Free Blacks — are waiting for us on the other side, and we just have to get there. 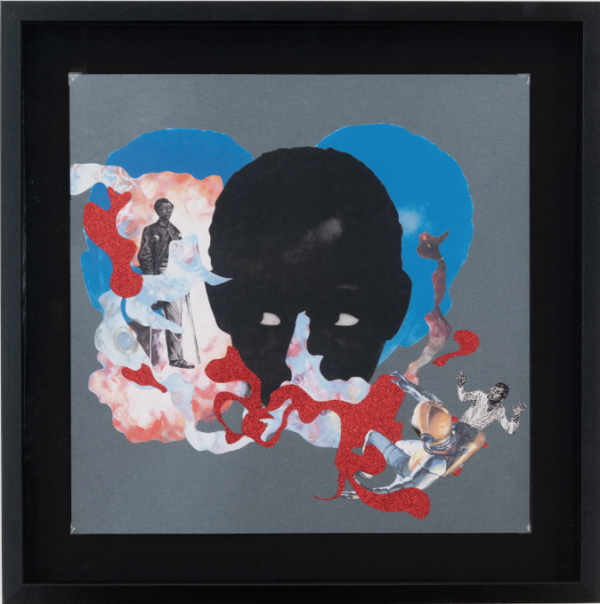 It was a lovely dream. At some point, the dialogue shifted to a discussion of our “practice” — that nebulous destination always just beyond the horizon. (A year before, I was on a phone call with a group of artists in Toronto I would soon be working with, introducing myself. When the question of practice came up, I responded: “I mostly lie on the floor and try to get comfortable.” Even then, it was more an ambition than a place I fully inhabit.) All three of us — Gay, Dunn, and myself — concurred that sound factors into practice. Dunn said,

“While I’m working on portraits dealing with race and injustice, I usually listen to music, but it’s not what you would expect. I listen to yacht rock.” 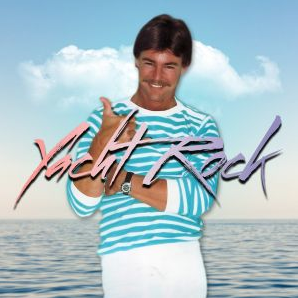 Yacht rock is the broad name for the unfortunately pleasurable earworms made by mostly white men in the ‘70s and ‘80s, a blend of mid-century Broadway musicals and smooth jazz. And why is that not what we would expect? Is it because Dunn is a large Black man from South Central? Is it because his work deals with issues that Black people feel about all the time, even if they aren’t always conscious of what that feeling is or where it comes from? But smooth jazz, the progenitor of yacht rock, is merely the distillation of jazz, which Ed Bland proclaimed in 1959 was “the story of the fantastic ingenuity of the Negro.” 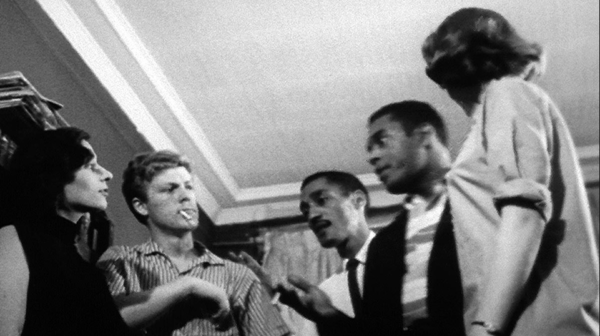 In his provocative film The Cry of Jazz — one of the earliest moments on camera for Sun Ra and his Arkestra — Bland activates the mise-en-scène of the jazz party, a living room gathering where young white people alternatively bristle against and flirt with the young Black men who have gathered to talk jazz and politics. The protagonist Alex tries to explain jazz’s relationship to Black life and viewers witness a scene of Black men in a pool hall, moving quickly between easy playfulness and tense awareness: Black masculinity. Alex says,

“Now contrast this to the sound of jazz as performed by whites, compared to white life.” The music changes into soft jazz and viewers are offered a montage of Christmas lights and merry shoppers, and a white woman cutting a poodle’s hair in a dog salon. This is the kind of jazz that would become smooth jazz: A smoothing out of the dynamic tensions of jazz. On Spotify the subtitle for the Smooth Jazz playlist reads: “Smooth, relaxing as jazz can be, here’s the soothing magic in the thick of the night…” Through Alex, Bland prophesied this (and so, perhaps, did Sun Ra, as his Arkestra transformed from a big band into a team of cosmic sonic reporters). Smooth jazz might be the soundtrack to the end of the world initiated through transatlantic slavery: An attempt to soothe magic into nothingness, into sleep. A smoothing that needs thick darkness, else what would it relax.

Down campus from Dunn, Gay, and me, Camille Norment’s untitled (Red Flame) sounded noisily in a gallery at the Logan Center for the Arts. Like much of Norment’s work, untitled focuses audiences on an otherwise broad concept through abstracted sound and minimal objects. untitled looks like a darkened room with three megaphones in the center of it. The megaphones point up toward the ceiling — as if shouting — and are uplit with a bold red glow. The room sounds like a fire, like how I imagine it must have sounded at times in Mendocino in Sonoma over the past two years. As one moves around the gallery, disorientation sets in. Because of the darkness it is impossible to tell where the walls are, and the fire sound surrounding the space reveals itself to be made up of dozens of discreet noises: teeth chattering, low humming, wordless whispering. This is not a fire but a rumble of voices, or rather it is both. Norment worked with the concept of the speech act in social uprisings, and the power of the voice in creating collective action. Like a fire, movements need minding to focus their energy; with negligence they can burn the house down. 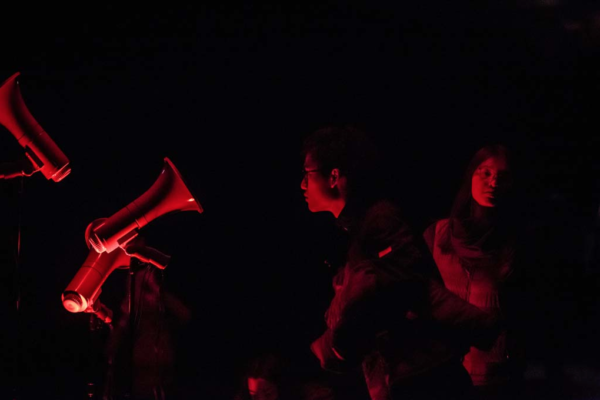 When I lie in the gallery — usually on top of one of the subwoofers, letting the deep rumble of low frequencies culled from a recording of a throat singer move through my body — I think about the “shout,” as Ashon Crawley theorizes it. The shout is catching the spirit. It requires the entire body and is the opposite of silence, though it doesn’t always include vocalizing. In his public appearances, I’ve heard Crawley talk about the shout as something we already have access to, regardless of ability. The shout is the embodiment of spirit — deeply complex in its totality — and is therefore always already available to all of us. We just have to find it. untitled feels like a shout: a collection of meaningless utterances that together create deep and complicated and agitated meaning. The opposite of smooth.

Discussing my experience in the gallery with a colleague — disorientated yet attempting to merge my body with a speaker — he mentioned he had brought a friend to the show and they left almost immediately, frustrated and uncomfortable. We sat quietly for a moment, considering that reaction. “Perhaps,” he offered after some time, “this is what a black hole is like. At first, it doesn’t feel like a thing you can stand. But if you can stand it, you’ll pierce the event horizon. And then, as you rush toward the singularity, it’s like you can’t wait to be ripped apart. Because it will be like you are going home.”