Series Out of Print
Out of Print
Series
Organized by David Senior
The Library & Archives at SFMOMA house a dynamic collection of primary documents related to the history of modern and contemporary art. Our collections help trace the interconnected trajectories of the museum with those of artists and art spaces that have shaped the cultural life of the Bay Area and beyond for the last century. Using printed matter from the Library’s collections of artists’ books, exhibition publications, and our rich holdings of ephemera from local artists, galleries, and other non-profit art spaces, here we present episodes within the larger arts communities of the region — as well as moments in which collaborations with these communities yielded singular opportunities for experiencing art. Out of Print is dedicated to the informal, innovative, and evocative spaces that artists and designers have created through staging and circulating their works in print.

The Mooseum and The Other Museum: Embedded Art Practices at SFMOMA 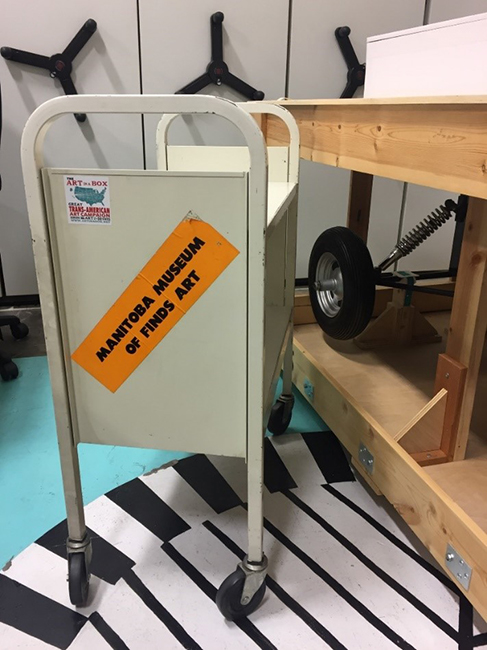 A bumper sticker on one of our older, somewhat battered library carts was my first introduction to the mysterious Manitoba Museum of Finds Art (MMOFA). More glimmerings appeared as we cataloged the Special Collections Artist Files (artist-created ephemera culled from our holdings of over forty thousand files for individual artists and artists’ groups), in exhibition announcements in the files for Lowell Darling, George Herms, and Sol LeWitt, as well as a file for the MMOFA itself — the contents of which reveal a dizzying array of solo and group exhibitions and events held between 1974 and 1979, and an obsession with moose. Humor is everywhere, and after a while, it’s hard to separate parody from reality; the overall impression is of a happily scrappy but secretly ambitious endeavor, obscure yet well-connected. 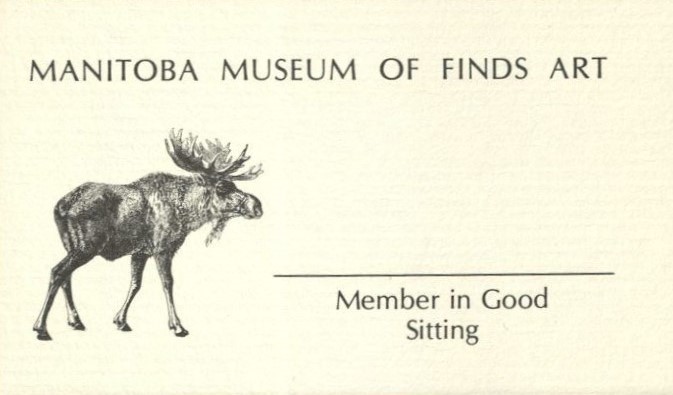 Unlike most of the Library’s ephemera, these items from the MMOFA have no postmarks. There’s also the suspiciously familiar address: Room 305 of the Veteran’s Building on Van Ness Avenue. Intrigued, I asked my co-worker, a long-time Library staffer, for an explanation: it turns out “The Mooseum” was the brainchild of Alberta Mayo, a.k.a. “Manitoba,” assistant to SFMOMA director Henry T. Hopkins and deputy director Michael McCone; The Mooseum’s gallery space was the waiting area of the directors’ offices of what was, until 1975, the San Francisco Museum of Art (“The Other Museum”). 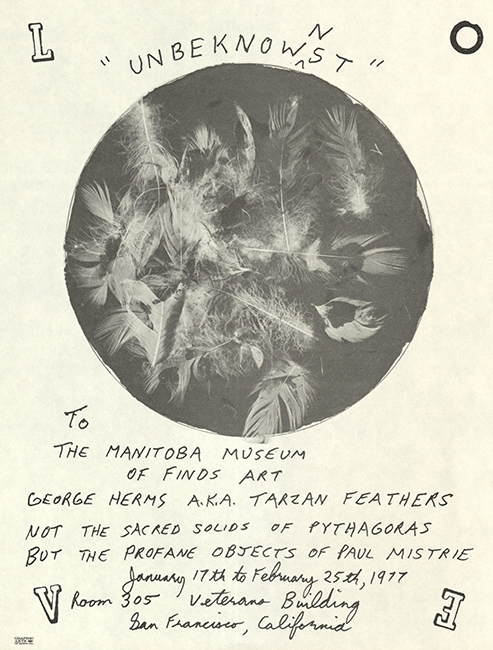 The puzzle pieces of the file came together much more clearly when I read Tanya Zimbardo’s 2011 interview with Alberta Mayo for Open Space. Their extended email exchange explored how this museum-within-a-museum came about, how it was received at the time (within the institution and also within the larger art community), and how the community it created has continued to come together in the decades since.

Here’s the origin story from Mayo’s Manitoba Museum of Finds Art (Some Sort of Chronology):

It all started with Finds: Dudley Finds, a.k.a. Lowell Darling. He was the Head of the Fat City School of Finds Art. His big find was the “This is Your Life” sign somewhere in Hollywood. Fanny Footstar and I met him at the airport with a twelve-foot long sign saying “Lelcome Wowell.” Hours later, on April 17, 1974, we held our graduation ceremony. The staff of the San Francisco Museum of Modern Art who did not have masters’ degrees received Masters of Finds Art from the Fat City School. Along with the graduation ceremony, the mooseum was born in Room 305 of the Veterans’ Building in San Francisco.

Later in 1974, the MMOMFA awarded the Chloe Footstar Fellowship for Museum Professionals, allowing a museum staff member to attend a symposium that the SFMOMA would not subsidize.

The first exhibition was given to the Chloe Footstar Fellowship grantee, Joel Sackett. It could have been viewed as an insubordinate act, hanging “unsanctioned art” in a technically non-viewing area of the larger museum. After not being fired, the museum continued. The idea was to give artists who would not ordinarily have an exhibition in the SFMOMA, an opportunity to be seen. 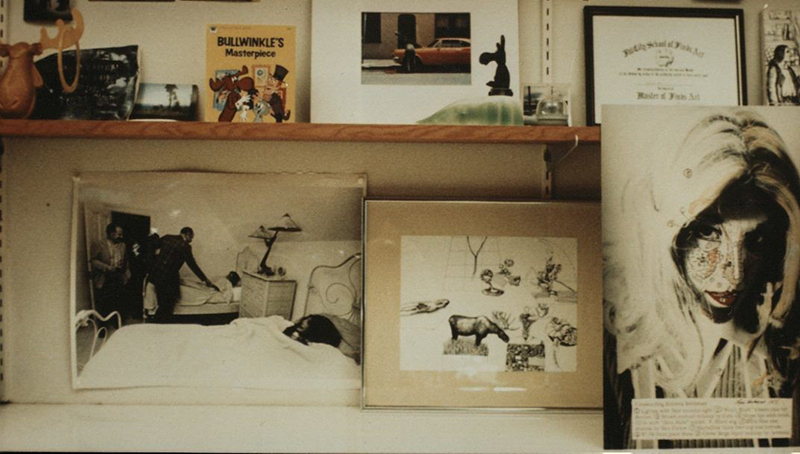 The permanent collection — an assemblage of Bullwinkle and other moose-themed items, photos, ephemera, and small-scale original art works donated by various artists — grew organically on the shelves behind Mayo’s desk. The director’s office waiting room became the site of twenty-three exhibitions between 1975 and 1978; when Mayo left SFMOMA for a position at the San Francisco Art Institute in 1979, the MMOFA traveled with her, occupying a new exhibition space in the windowsill of her office. The MMOFA membership remained active, convening for annual Chloe Footstar Memorial Potluck Picnics held at Port View Park in Oakland. Mayo continued corresponding with the MMOFA network and issued an annual birthday calendar for the membership. In 2012 Mayo’s MMOFA holdings were the subject of an exhibition at Will Brown.

We are very fortunate that Mayo recently donated a large portion of her MMOFA archives to the SFMOMA Library + Archives. Our department is a natural home for this collection, since the Library was linked to the MMOFA from the very beginning — the reception for the Fat City School of Finds Art graduation ceremony was held there (B.Y.O.B.) and Librarian Eugenie Candau (a.k.a. Fanny Footstar) was an early and enthusiastic co-conspirator. 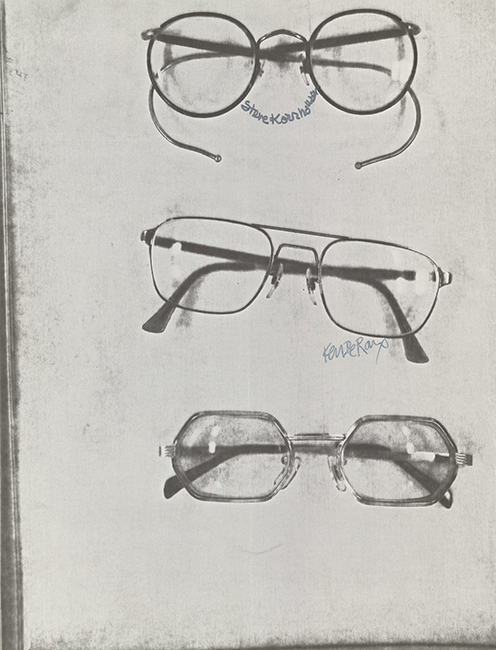 Looking through the letters, photographs, clippings, promotional items, and mail art in Mayo’s archives, one finds ample ridiculousness (so many moose!) and remnants of office hijinks (photocopied glasses) — but also a consistent theme of institutional critique and evidence of a sincere effort to expand the museum’s curatorial interests. 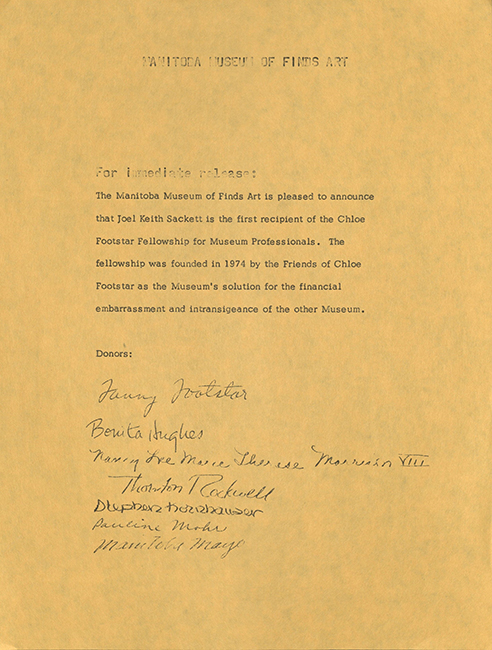 The announcement for the Chloe Footstar Fellowship for Museum Professionals casts The Mooseum in the role of an employees’ mutual aid society to compensate for the “financial embarrassment and intransigence of the other Museum,” using humor to call out the very real problem of inadequate funding for professional development. 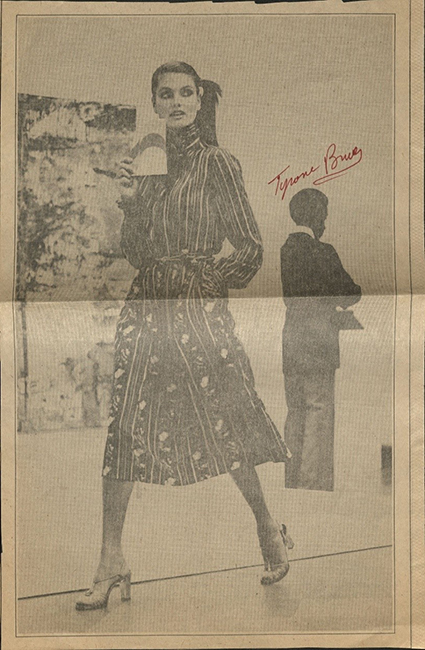 The insistence on the primacy of the workers to the museum project is tidily summed up in a clipping of a Saks Fifth Avenue advertisement photographed in SFMOMA’s 1977 Rauschenberg exhibition. With the simple addition of a signature, the subject of the ad becomes neither the glamorous model nor the Rauschenberg on display behind her, but Tyrone Brue, the security guard pictured in the background. 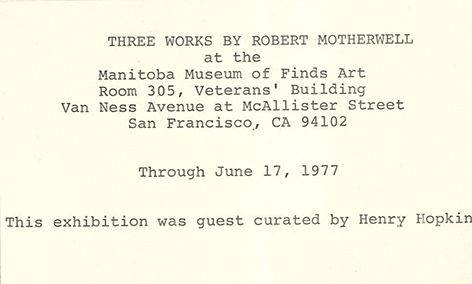 The carnivalesque inversion of hierarchy appears again with an announcement for the exhibition Three Works by Robert Motherwell, gamely guest-curated by Hopkins.

The MMOFA exhibitions highlighted the porous relationship between art workers and artists, placing the artwork of museum staff on display in an area customarily reserved for the elite of the museum hierarchy. Photographer Joel Sackett, the winner of the Chloe Footstar Fellowship for Museum Professionals, was also the subject of the first and last MMOFA exhibitions. Other solo MMOFA shows highlighted curator Rolando Castellón, an artist and one of the founders of Galería de la Raza, and Julius Wasserstein, Supervisor of Galleries (and a well-established abstract expressionist). 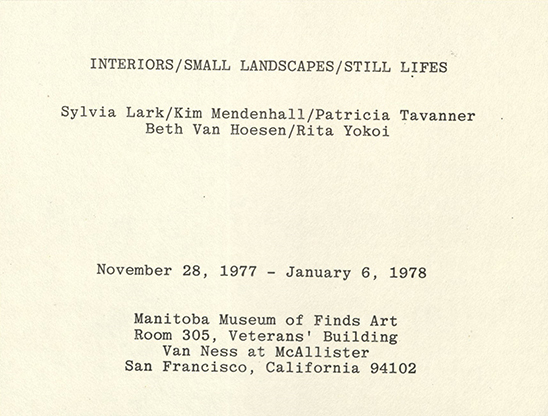 In the case of Interiors/Small Landscapes/Still Lifes (November 28, 1977–January 6, 1978), Mayo created a direct dialogue with the galleries of The Other Museum. A September 14, 1977 letter from Mayo to Eleanor Coppola frames her curatorial choices as a response to the America 1976 exhibition of large landscapes running concurrently in the museum galleries:

As Director of the Manitoba Museum of Finds Art, I am interested in organizing an exhibition to run tangentially to the America 1976 exhibition. At this time my idea is to show still lifes and landscapes done by women in a small scale to compliment [sic] the MMOFA space. 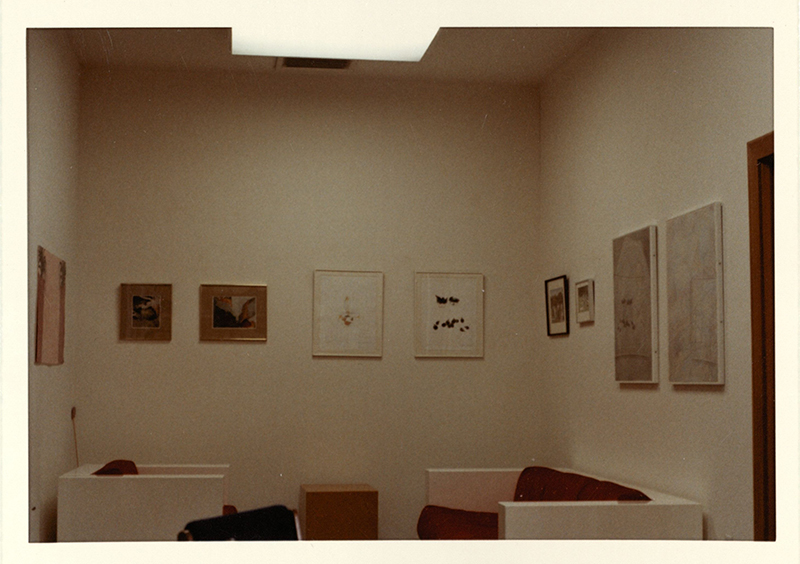 It’s easy to feel sentimental for the experience of working in the smaller, less-formal institution conveyed in the MMOFA archives — the current SFMOMA staff is more than ten times larger than it was in Mayo’s time. Still, there’s a certain familiarity in the spirit of the MMOFA, in the staff collaborations and networks of emerging artists it tapped and celebrated. SFMOMA continues to employ many people who are actively engaged in the art world outside of the museum, as artists, curators, writers, and organizers. When staff art shows are held in the office spaces, it’s always a revelatory treat, and every once in a while works by these individuals make their way into the public spaces: currently, a site-specific installation of murals by Christo Oropeza is on view in the Koret Education Center, and a sculpture by our longtime exhibitions maestro Kent Roberts is installed on the fourth floor in his memory. 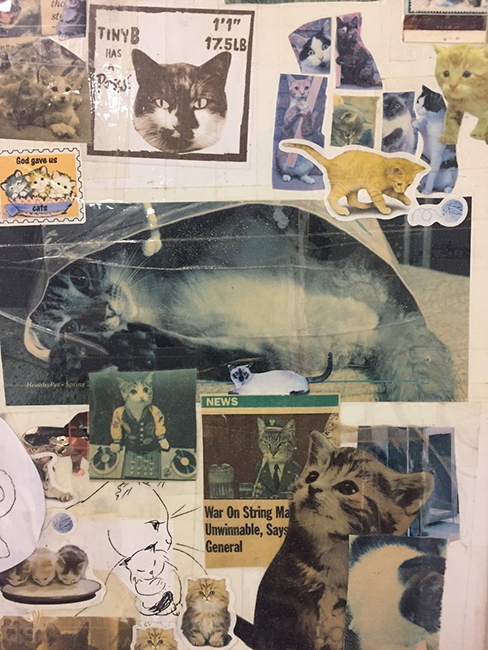 Humor is still a sustaining force. Installations of art and kitsch percolate in staff-only corners of the museum — a column in the art corridor is home to an ever-growing collage of cats (more recently facing off with a growing column of dogs), and Waldo was an inside job. In ways big and small, my colleagues continue to push the curatorial conversation and advocate for the importance of workers to the project of museums.

Meanwhile, the Library + Archives continues to document and spotlight these staff efforts, past and present. Our ever-growing collections of ephemera, artists’ books, serials, exhibition catalogs and the institutional records of The Other Museum (as well as The Mooseum) are open for research. Come visit! 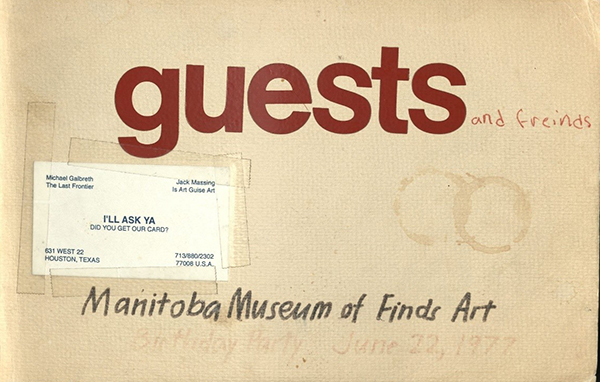 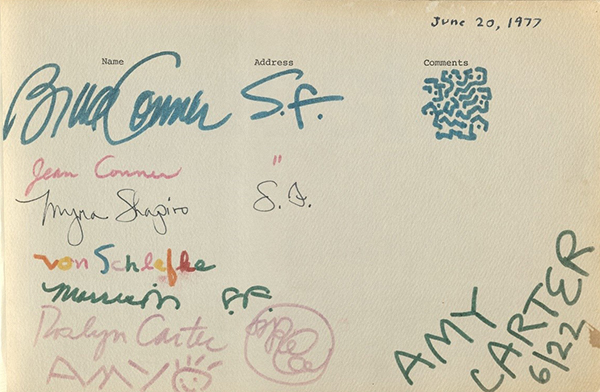 Tags: Abby Bridge, Out of Print