Negotiating From the Kitchen

In his 1996 conversation with Martha Wilson for BOMB, Pope.L discussed the “complexification of race and poverty. You think you know what whiteness is, well, maybe you don’t.” For decades, Pope.L has been producing works on graph paper that make bald and confusing statements about race, such as his piece White People Are Negotiable (date unknown). It is an A-size offset print featuring bold black handwritten lettering re-stating the title, and ballpoint-pen style sketches of what could be falling dollar bills or perhaps doors opening and closing. Jotted around the claim of negotiability are notes-to-self for some future project or thought: “the great father (last),” and “again the door, What to do? paint him out.” In these works, Pope.L makes visible the conundrums he posits to Wilson when he talks about relating to the impoverished white folks in his then-home Lewiston, Maine cashing in their food stamps — but being unable to articulate that relation to them. Whiteness is a negotiation, he argues, and his work offers that up without reconciliation. Pope.L seems to contend — as do I — that race is not reconcilable. Rather, it is shifty, confusing, and occasionally familiar. 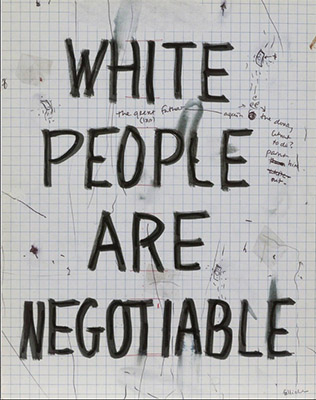 When recently a friend — an artist based in LA — asked me to assist on her project at a New England museum in October, I said yes. I was intrigued by her idea of choreographing a procession meant to ritualize Black atonement for Native genocide, especially in the context of a civic parade in a majority-white town. The project’s questions are:

How do we repair harm which we did not initiate, and which in fact was always coupled with the harm being done to us?

How do reckon with our non-consensual roles in ancestral harm and ongoing traumas, while at the same time acknowledging we need healing from the very same atrocities done to us?

It is a complex conceptual project, and the constraints of the institution brought up new problematics. Like many well-endowed museums, this one did not have particularly strong connections with regional Black and brown communities, so when volunteers responded to the call for participants, they were almost entirely white. The questions the project wants to ask are kitchen conversations — the kind of chat you do in the back of the house with family and play cousins. But a parade is the place for porch talk — it is where we broadcast symbology and rally support for our ideology. This particular parade was full of Trump signs and Confederate flags, and was not a space for negotiating the complexities of white supremacy, memory, Blackness, and Indigeneity.

So, to ease my discomfort, I added a fourth formation to the choreography. On my call, the white participants would crawl on their hands and knees through the center of town. It was the semiotics of the kitchen come to the porch, a way for me to allay my disorientation at being one of two Black artists invited into rural white America to make art about Black things for white consumption. 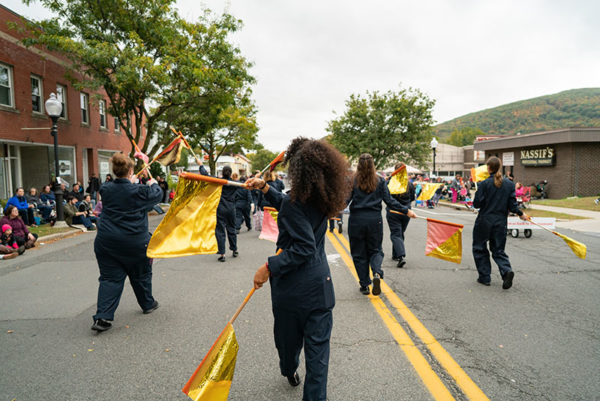 After all of that, I went cosmic bowling. I was with my white sweetheart, visiting their hometown: rural, working class, ninety-three percent white, likely not dissimilar to Lewiston. We went on a date to the fried chicken spot (good chicken, no hot sauce, confusing) where the TV broadcast images of urban-adjacent folk luxuriating in a middle-class lifestyle that was clearly inaccessible for many of the diners in the wood-paneled dive. We drove over to the Ten Pins where two white men offered to buy me drinks in front of their girlfriends. A light-skinned Black femme, I found myself simultaneously terrified of being surrounded by white mountain folk and yet excited about the possibility of negotiating a free round of bowling by leveraging whatever powers of the exotic these men were handing me. I felt I could better reckon with my regionalist classism by leveraging my own tokenization, and maybe get some free stuff out of it.

The attention was flattering, if uncomfortable and disturbing, but cosmic bowling wasn’t about me: It was all about trap, song after song. The hit of the night was “Trap Queen” by Fetty Wap. The under-forties went wild, sing-rapping every lyric: 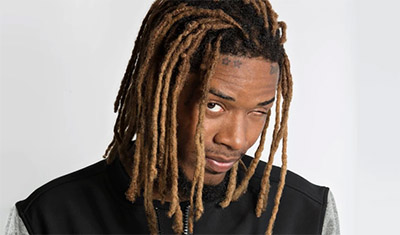 Married to the money, introduced her to my stove
…she my Trap Queen…
We be countin’ up, watch how far them bands go.
Man, I swear I love her… we be lettin’ bands go.
Everybody hating, we just call them fans, though.
…and I get high with my baby.

It was Fetty and I, me and Fetty, the two Black people in the bowling alley that night. But I wasn’t high and Fetty wasn’t calling to me. Massachusetts has some of the highest opioid and heroin death rates in the country. Maybe I didn’t know the words because I never felt I had much of a right to them. Maybe Fetty would’ve wanted it this way, gangs of white folks chanting “Yahhh” in unison, in which case maybe there’s a possibility that all that tokenizing was also in small part an attempt at finding common ground. Or perhaps shifting ground on which we can at least stand and try out the negotiation.

The problem — and the brilliance — of Pope.L is that he does kitchen theory and parades it around like ideology, and only he (and every other Black person) knows it’s not. Who gets to negotiate? Who gets to refuse to crawl? Who gets to fly a Trump flag and then buy me a drink? Under what circumstances do I get to accept? Before we can destabilize the drive to reconciliation, we have to first acknowledge that harm has been done, and unevenly, and that some of us are in desperate need of healing and retribution. Some of us are desperately fucked up, and we need help, and I do not know what to do with that. I do know, however, that asking white folks to crawl on their hands and knees through a white town — and then clinking cans of rosé with them later that afternoon — felt damn good. I would like to do it again sometime.