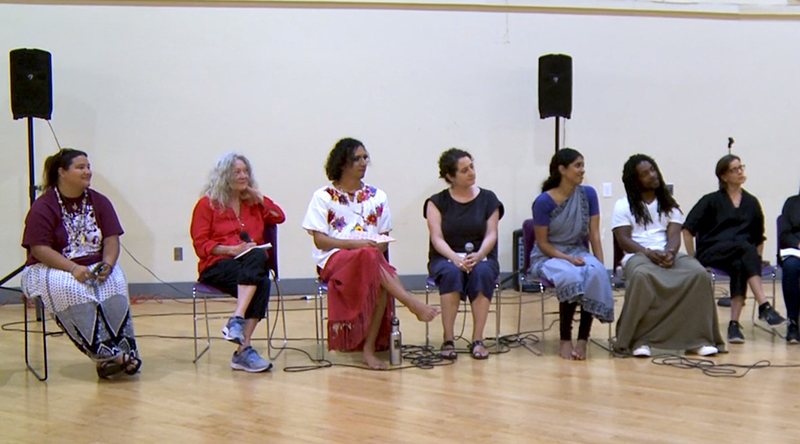 My grandmother was concerned that I didn’t know how to dance. I had just arrived in Addis Ababa to attend my cousin’s nuptial festivities when she expressed this worry in passing. Her concern was fair: though I attended many weddings in my childhood in Ethiopia, during the decade I lived in the States I’d only been to one Ethiopian wedding, a muted celebration of a second marriage. When would I have learned the dances of our weddings?

Witnessing four artists contemplate the roots of their movement and perform them in the present at Inherited Bodies reminded me of my grandmother’s misgivings around my dance fluency. In a short film that preceded his game of Capoeira, Jarrel Phillips explained the Afro-Brazilian art form as a conversation through movement wherein the body becomes both the story and the storyteller. What could my body tell of marital celebration? Veteran Capoeiristas play stories cunningly, their spellbinding dance concealing a ferocious meaning from those who provoked it.

Because the form is never played alone, Jarrel brought along Capoeira practitioners and students. As I watched them tag in and out of their circle, sparring with a different partner for a few minutes, I came to admire the game’s inherent design for teaching and learning. In a Capoeira circle, who can leave unlearnt?

In Bharatanatyam, the torso of the dancer is fixed, but nothing else is. Especially not the face. Nadhi Thekkek’s told stories of mothering her child in the US and of the horrors of 1947 partition that split Pakistan and India. As her face emoted a choreography of expressions, from disbelief to sorrow to comfort, I questioned if my gaze on it was appropriate. Maybe because I expected the more stoic faces of European dance traditions that re-direct the audience’s eyes to the body, to the limbs that extend away from their faces. What’s the value in being stoic onstage anyways? In Bharatanatyam, like in life, there is no virtue in dispassion.

Before one of her performances, Nadhi took a moment to explain that, while she would be dancing the piece solo — in the tradition of the Indian classical dance — that particular performance is one she typically dances in an ensemble, a composition formed by Western influence. Like any other language, dance isn’t immune to the pressures and possibilities of its expression. Those forces keep it alive, though certainly not intact. In an evolution borne in diaspora, a solo dance becomes an ensemble — fulfilling a need for community and perhaps arising from the scarcity of opportunities to foster one. An adaptation like a new tributary rather than a dam. 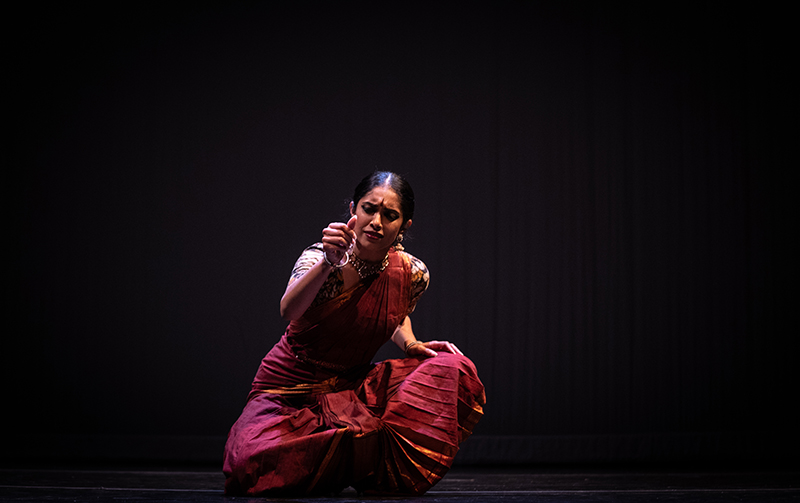 In rooms similar to the hall in the Women’s Building, I performed traditional Eritrean and Ethiopian dances with my friends in college. It’s hard to understand now what gave me the courage to dance onstage back then. The simplest way I can explain it is that I was so hungry for those movements, it didn’t matter who was watching. And so, we followed the ambiguous US tradition of cultural showcasing performed by students from kindergarten on out. Focusing on the dance and music traditions of a corner on our continent, we would share the stage with Nigerian students doing the same, selecting three or so styles from different regions and choreographing entire sequences in between, teasing each other’s moves and going off on freestyle tangents. Never having taken a dance class in my life, so much of that experience was new to me — but everything about dancing felt like remembering. 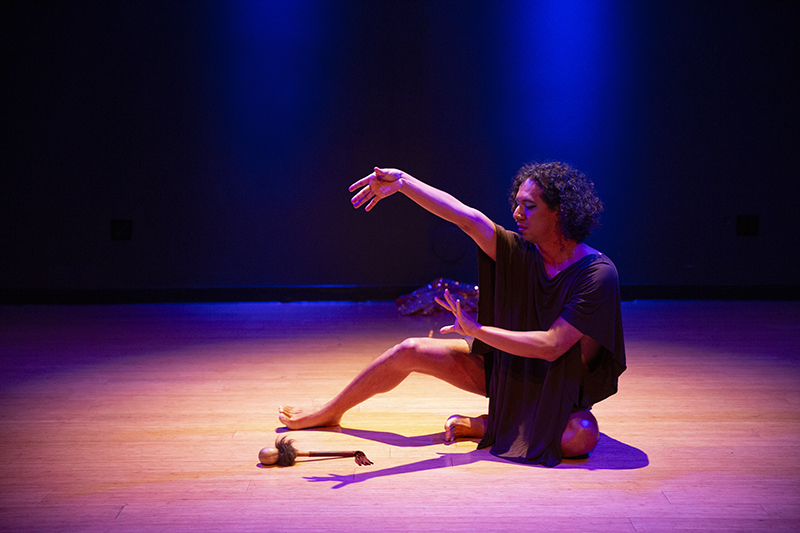 We don’t always remember. Snowflake Towers began with a proposition: Were we feeling ancestral? If not, she prompted us to keep our ancestors and our ancestors’ land in mind for the duration of her performance. Opening with a traditional Tzotzil Chant, she performed the rituals of her days at age seven, offering a corresponding narration that sped up and spun dizzily, like her dance. In the end, her day’s routine was a blur of limbs and words — gathering eggs, eating them, waving to her family working on fields from the school bus, arriving at a school where she wasn’t allowed to speak her native language, returning to her family’s martial arts studio.

Disconnected from her parents’ native land, Snowflake’s days in California were filled with incongruous performances of daily life. I wondered: How do you find a home in your body on foreign land? Do our bodies know something about home that our minds don’t? Maybe dance can clear the distortions and vaporize the distance so you can return to yourself. 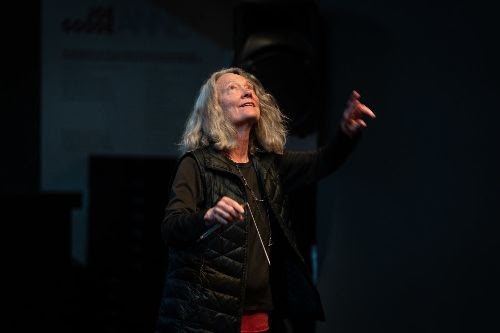 Sara Shelton Mann’s performance of ritual healing spoke to those distortions. First, she chose a person from the audience to serve as a surrogate for the collective. Then she “zapped” unhealthy patterns of thought from the audience member with hands like a pair of jumper cables charged by her heart’s healing intentions. She zapped the surrogate’s head, their arms, their legs, all the while shouting “Zap it!” What would we move like if we were to zap the dissonant patterns in our minds and bodies, even when — especially when — they hold the false comforts of memory and privilege?

There’s a certain kind of music that won’t let you sit still. It knows your body more than you know it. Sometimes this is the music of your ancestors. Sometimes it’s a song from a place you’ve never been, but which makes a home out of you.

When the first occasion to dance came at my cousin’s wedding, there was no static: I knew the song and the song knew me.