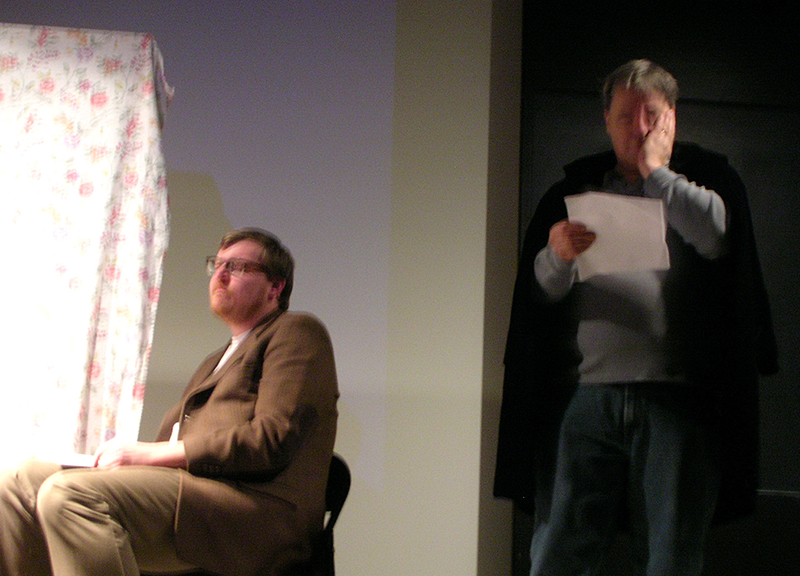 Kevin and I acting in The Date, a play written by me and Sara Larsen. Sara and I played Janis Joplin and Charles Olson, respectively, and Kevin played Robert Duncan—hence the cape. Photo: Alli Warren.

The first time I beheld Kevin Killian, it felt like an encounter with a star. I was working the door at a Poetry Center reading at the Unitarian Church in San Francisco in 2001, and when Kevin breezed by us, I turned to my friend and asked, in a low voice, Is that Kevin Killian? It was uttered in the way you would turn to your lover at the Burbank airport and ask Is that Denzel Washington in the Starbucks line? For my friend and me, practically teenagers and obsessed with poetry and poets — particularly the poetry and poets that had taken shape in the Bay Area — Kevin had only been a rumor. As a fact, standing in front of me then and countless times in the subsequent eighteen years, Kevin’s luminescence hardly diminished.

One of the things you experienced if you experienced the days after Kevin Killian’s death on this Earth was a tremendous outpouring of gratitude, a fluvial series of stories and sentiments. I noticed the repetition, in these expressions of love and grief, of the same scene: Kevin meets a young artist or writer and makes them feel like they are a legitimate and relevant maker of art, then introduces them to dozens, hundreds, thousands of people who will matter to them. That feeling Kevin gave you, that you were, at whatever age or experience, an actual artist making actual art, was powerful irrespective of whatever truth there was to it. Kevin, while never losing a sense of play, gave young artists and writers the feeling of being taken seriously. It birthed confidence, an intangible grace not on offer in any MFA program. If Kevin gave you this grace, your world, quite simply, grew bigger.

Kevin made my world bigger. Beyond exposing me — as a very young and green writer — to more experienced poets and artists, he supported my work. He included my poems in the zine he edited with Dodie Bellamy, Mirage #4/Period[ical], and put me on the stage in a couple of his legendary plays. As an editor at Krupskaya, with Jocelyn Saidenberg, he published my second book. He assured me that I was hot enough to be photographed nude for his series of portraits called Tagged. In the most literal sense, Kevin was encouraging. I mean, courage means “heart” and he gave me and so many others this tremendous courage, which in turn gave us our own greater power and volume. 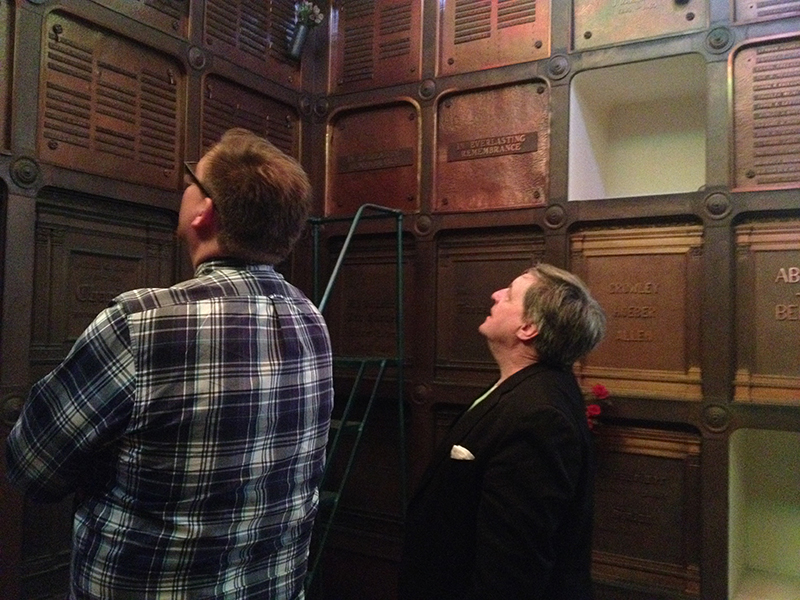 Kevin and I at Jack Spicer’s grave. Photo: Jason Mitchell.

This generosity is legendary, especially now. It lives in the memories of those of us who experienced it, and we will share it with others like a delicious piece of gossip. Most good and proper gossip about dead artists centers on their bitterness, spectacular abjection, irreparable social destruction, and Everest-level drug and alcohol abuse. But we have a different kind of story to tell about Kevin Killian — a way of giving him longer life, to build a collective monument to his unbelievable heart. And there is also Kevin’s work, which will last forever. Maybe that’s an idiotic thing to promise. But if there are future “people” reading this with a smirk, like, “Kevin who?” it’s their loss.

There is too much to say about his staggering oeuvre in a modest post on Open Space. But from Kevin’s epic Amazon reviews — of which the world impatiently awaits a full collection — to the breathtaking formal innovation of Argento Series, which uses Italian horror director Dario Argento’s films as a screen for one of the great elegies to those lost to AIDS, Kevin’s writing feels limitless. Mirroring the serious play and playful seriousness which characterized what it felt like to talk with Kevin, his works effortlessly pivot from hilarity to heartbreak. Perhaps most useful for those readers of his who also write, they exude permission. His devotion to a personal pantheon of celestial beings, stars and singers trapped on Earth, lorded over by the diminutive goddess Kylie Minogue, liberates us to love what we love. And what we love we should love freely, with courage. 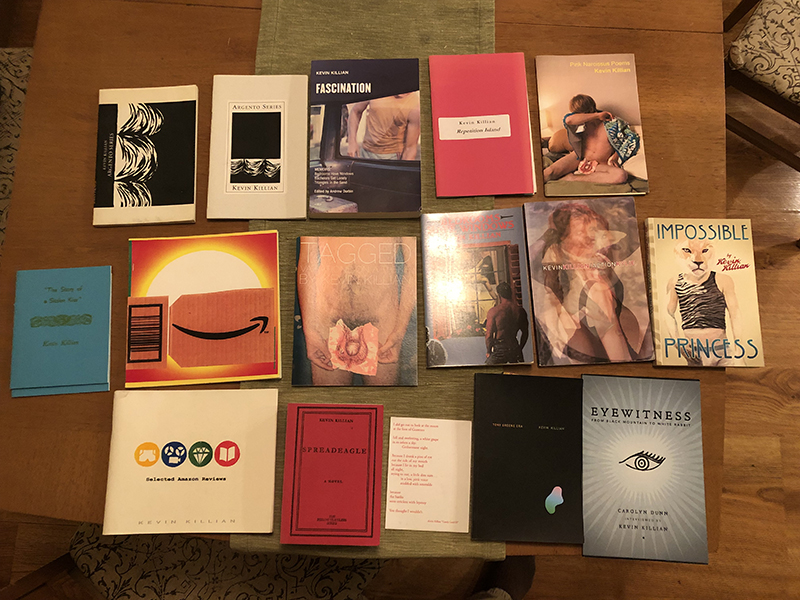 My collection of Kevin’s books.

In his literature, as in life, Kevin very carefully wrought a persona. The line between sincerity and caricature can be thin indeed; at times, “Kevin Killian” almost feels like a villain in a cheap noir, kicking your ass (or, more likely, fucking your ass) after downing a few highballs in a seedy alley bar. But the hard-boiled version of “Kevin Killian” is hardly one-dimensional. In his last published collection of prose, Fascination, Kevin writes about his brief relationship with the musician Arthur Russell, regretting the casually mean and retrospectively shallow contempt he felt for Russell’s acne-scarred face. Between these poles of tenderness and cruelty, a galaxy of feeling. His range was immense, and he leaves us with an enormous body of work to read and reread.

Kevin was known, and has been wildly remembered, for his poetry, novels, short stories, plays, acting, directing, photography, editing, art criticism, biography, whatever genre the Amazon reviews invented, friendship, teaching, publishing, and fashion. Where he has been insufficiently celebrated is his work as a singer. I only encountered this in public performance twice, outside of the trusty musical numbers which concluded many of his plays. But the experiences never left me.

The first came in 2005, when Kevin performed at the New Yipes Cabaret at 21 Grand gallery in Oakland. The poet Geoff Dyer played guitar for a breathlessly rapt crowd as Kevin tenderly sang The Velvet Underground and Nico’s “Femme Fatale.” Kevin may not have been a classically great vocalist, but was Nico? He gave a masterful performance, in which, like Nico, gesture and style more than compensated for virtuosic natural ability. The femme fatale in “Femme Fatale” recalls some of the nuance of the character “Kevin Killian,” menacing and flirty, destructive and tender. Singing the chorus back to Kevin and Geoff on stage, see the way she walks, we saw Kevin, the way he walked and talked. We were all seduced in that packed room that night. 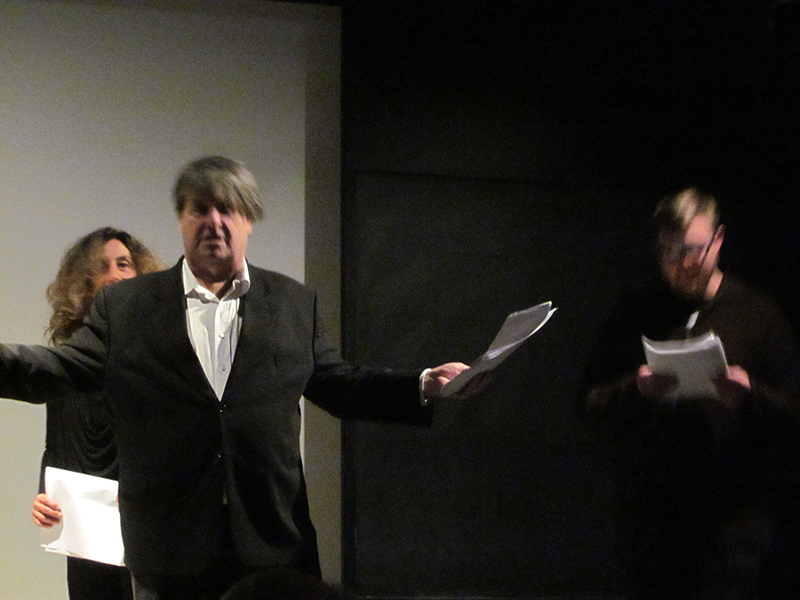 Kevin, Stacy Doris and I performing in a Poets Theater play in 2007. Photo: Alli Warren.

And then came the keynote address at the “Poetry of the 1980s” conference in Orono, Maine. Reflecting on the countless funerals he attended in that decade, Kevin noted that the song he heard most often at those somber ceremonies was Joni Mitchell’s “The River,” from her album Blue. He sang the first verse and chorus for the assembled crowd, and a few weeks later to a likewise delighted house party in Berkeley.

Blue is an intense album and “River” one of its most depressed moments. The utopian longing Joni wails is founded in the recognition that she has fucked something up: “I went and lost the best baby that I ever had.” It’s also figured spatially, in terms of expanse: “I wish there was a river so long I would teach my feet to fly-y-y-y-y-y.” The devastation the song centers is made even more painful by its temporal setting: Christmas. From the opening chords, ironically reminiscent of “Joy to the World,” “River” is one of Joni’s most painful plaints. If Kevin couldn’t quite hit the higher notes of the singer’s famous range, he brought her pain and vulnerability to the song in an unforgettable way.

The day Kevin died, a friend texted me that the “world felt smaller,” and that felt exactly right. So maybe it was that sad, new, smaller world that I was thinking of the day I wrote this poem for Kevin, a couple of days later. The world, where you deeply wish there was a river you could fly away on, was dry and confining, despite the bright skies of approaching summer.

Kirsten Dunst is a great
actress, dogwood a dashing
flower, mustard wonderful
to eat. These phrases keep
me up in bed, insisting
on their truth like the beat
of a minor pop vehicle,
an afterthought really,
written with Rihanna in
mind and delegated to
oh I don’t know
you hear it at an opportune
time and become its
servant. Usually when I am
this sad I turn to pop
music, to trestle what
I can’t nest, but Alli sleeps
kindly beside me. Even my
phone’s tucked in for the
night, quietly losing heart.
Someday it will take space
in a waste basket, we
all will. In the morning
I run to its arms but by
then I don’t want to hear
anything. 7:10 a.m. and the
air in El Cerrito smells like
frying little fish, which
are delicious to eat. Big
flowers bloom out of
their bags. Kirsten Dunst
is a great and underrated
actress. O my friends, can
you fucking believe that
this is the world and no
where in it is Kevin Killian?