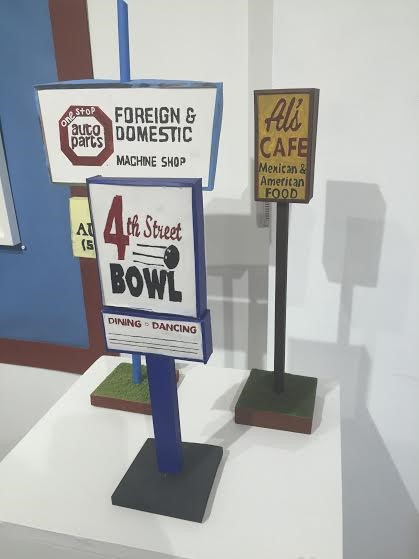 Isaac Haney-Owens is a local artist and the curator of Cityscape, a show of metropolitan visions (his own and those of others) wrapping up at Creativity Explored (CE), a Mission gallery and workshop supporting artists with developmental disabilities.

I had already seen some of Haney-Owens’ Bay Area signage pieces online and in the CE zine Whipper Snapper Nerd, but witnessing them in person on a sunny August afternoon, I was especially moved by their details—the yellow in the sign for Al’s Cafe seemed yellower, the infrastructure and scaffolding more thoughtful and impressive. Haney-Owens’ signs bear the marks of their creation and recreation, much as our most cherished memories bear the subtle marks of every recollection. 4th Street Bowl and its signature bowling ball belong now to those who worship its memory and keep it alive, for example. Of course, my version of San Francisco would look much different from this one. As would yours.

As Haney-Owens told Whipper Snapper Nerd, he has no plans to embed these memory structures in larger urban vignettes. His practice has evolved from mixed media (painting on photographs of signs with wood and other elements) to hand-painting pieces of wood until they resemble Bay Area signage. The older pieces may seem sharper but more distant, too; the newer work feels more personal. Maybe that’s why Alameda Cellars (2018) and its kin radiate both intimacy and authority. Outside the context of the city and its collage-like sprawl, they tower somewhat aloofly in occasional typographic clusters.

One of these older pieces, Twin Castle Express (2015), reminds me of the box assemblages of Joseph Cornell. Haney-Owens makes clever use of what I think are golf tees, painted and incorporated seamlessly as the columns for his sign. The show was drawing to a close, the light dying in such a perfectly gentle way against the gallery wall that I felt it necessary to note this coincidence in pen on the back of a complimentary brochure, but quickly crossed it out so that it wasn’t completely obliterated but could still be deciphered later on, in private. Meditating on the scaffolding of memory, I imagined the pair of distant neighborhood water tanks, painted in a red-and-white checkerboard pattern, which I grew up staring at from our living room window in northeast Philadelphia; I wondered what they would look like as tiny idols to yesterday. I hadn’t thought about those tanks in years, yet I could see them clearly in my mind, down to the rust and graffiti. Together, I recalled, I had thought of them as Tablecloth Mountain. Was the old Lucky Penny sign on Geary, mentioned in his interview with KGO, something like Haney-Owens’ personal Tablecloth Mountain? A childhood archetype? Did making it a physical object in some way diminish its power? Was power even the right word? During my visit to Creativity Explored, I returned to an internal debate I’ve long had regarding scale and intricacy: Why are we so enamored of tiny objects? Why must the angels — however many of them there are, in the end — dance upon a pinhead? Is it the sheer complexity and implied effort which mesmerizes us, or the startling irony of unexpected proportions, or both?

Later, at home, I couldn’t help but look back over my shoulder at my once-beloved Tablecloth Mountain. Some quick research turned up that, apparently, the Somerton Storage Tanks, as they were known, had been built back in the 1960s to store water in case of an emergency. I was able to find historical photographs of the exterior as it looked over the years and, eerily, the interior as well. Since I had seen them last, the tanks had been repainted. Goodbye red and white. For a moment it felt like someone had hacked my memories. And it made me wonder, too: what would my recollection of those tanks have looked like if I had bothered to construct an effigy of them back then—a 3-D memory that never changed and accompanied me everywhere?

We know that old hand-painted signs are perpetually disappearing, poised on the verge of ghosting us forever, and that, no matter what we do, we are powerless against the progress of time. One day, perhaps, when everything that we love is gone, these lovely handcrafted miniatures may form some half-remembered city of their own—mysteries from a rich, exasperating, and now lost civilization.